Who Created These Campus Whiners? 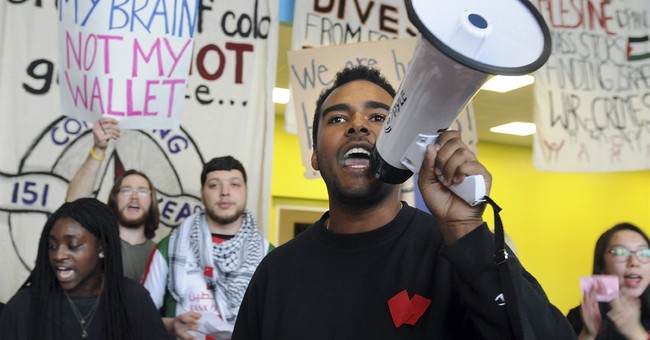 Remember the campus unrest in the 1960s? Whether or not you agreed with the students, they were protesting about things of great consequence -- civil rights, the military draft, the Vietnam War. They had chants such as "Hell no, we won't go."

Those were the good old days.

Now we are witnessing whiny college kids marching in the streets, screaming obscenities or taking over the university president's office, and for what? Feeling slighted? Having their feelings hurt? Talk about rebels without a cause.

I've traveled to many campuses in recent weeks and experienced the melodrama of student grievances firsthand. To be fair, I should note that many of the students are impressive, with open and inquiring minds. It's only a loud-mouthed minority whose mission is to shut out and shut down views they find ways to be offended by.

These leftist kids are agitated and angry. This is a hangover effect, I suspect, from the shattered Utopian dreams of "Hope and Change." I have noticed in recent months that these students attend my lectures not to learn anything -- they know everything already -- but hoping that I will slip up or say something they can label as offensive or that violates their eight-volume campus speech code.

When I ask them what they want, a typical response is "radical transformation of the economy" to reduce income inequality, racism and sexism and, of course, to end climate change. Government will command these changes to achieve this transformation. These are young Stalinists who are willing to suspend almost every basic freedom and civil liberty for "the greater good."

They're on a roll, having already successfully removed university presidents and faculty for the sin of being insufficiently responsive to their latest grievances.

At one recent visit to the University of Massachusetts, I asked a few kids what their plans were for Thanksgiving. They practically spat at me for even mentioning this white-supremacy holiday, which only trivializes and glorifies the genocide of the Native Americans by the pilgrims. Wow. Sorry I brought it up, especially in your "safe space."

I can't help contrasting these attitudes with a recent meeting I had with a group of soldiers who had returned from Afghanistan. These brave men and women risked their lives every day. They had real bullets shot at them, not the verbal ones that the campus leftists find so offensive. They have genuine and, in some cases, life-changing injuries: ringing in the ears, post-traumatic stress disorder and broken limbs.

They served so that campus leftists can remain sheltered in their cocoons and protest the wounds to their fragile psyches from having to listen to a point of view they disagree with. The horror.

Can you imagine the tyranny you would bring upon yourself by actually hiring one of these self-righteous complainers?

Employers tell me despondently that millennials are by far the highest-maintenance generation they've ever seen. One recruiter recently told me: "They need their hands held; they demand affirmation; they are forever whining about their feelings. We really don't have time to deal with their petty grievances."

Who's to blame for all of this? Alas, we are: the parents who caved in to every instant-gratification demand they ever had, arranged "play dates" for them, showered them with positive affirmation daily and gave them timeouts rather than spankings. Our schools are to blame for labeling them "gifted and talented" and awarding them towering trophies for finishing in sixth place so as not to damage self-esteem. College professors are to blame for corrupting their minds with hate-America ideology. And now the administrators are to blame, too, as they bend to students' every petty demand.

Worst of all are the successful, well-meaning Americans who think they are being charitable by giving their money to the very universities that are indoctrinating these kids with nonsensical ideas. Why? Just stop. Society would be better off if you just burned your money.

I admit that people make these complaints about every new generation. But millennials seem seriously off-kilter, and we made them this way. A generation that has grown up in more affluence and personal freedom than any other in history has been taught to hate the free enterprise wealth-creation process that gave them what they want in the first place. A generation that has been drilled since pre-kindergarten that the highest virtue in life is tolerance has suddenly become the least tolerant in history.

What they lack most is gratitude. It's something to think about this Thanksgiving.