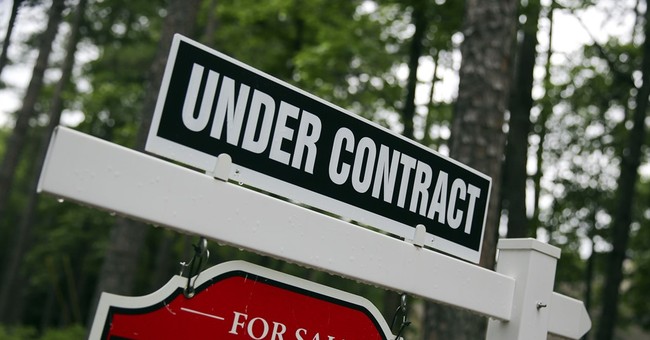 Last month I bought a house in Potomac, Md., a trade-up on my current home, and was shocked to learn in the ensuing weeks that I couldn't get a mortgage loan. First, I went to PNC bank. Then Wells Fargo. Then another. Denied. Denied. Denied.

No, I don't feel entitled to a loan, and the banks have every right not to lend me money. But my tale of woe tells a broader tale of what is going on in the lending industry these days.

All the bankers told me the same thing: "Steve, if you'd walked in our bank eight years ago with this mortgage application, we would have rubber-stamped it in five minutes, and you would have walked out with a bag of money."

Those were the go-go days of the real estate frenzy when people who worked at McDonald's could walk into a Countrywide and get a $600,000 mortgage. Back then, underwriting standards were tossed out the window.

Now, thanks, in part, to new federal regulations, like Dodd-Frank with its rules against predatory lending, the pendulum has swung to the other extreme, and underwriting standards (for those without federal insurance) are absurdly tight. Here we are with the lowest interest rates in 50 years but many businesses and aspiring homeowners can't qualify. Water, water everywhere and not a drop to drink.

My situation was doubly frustrating because I'm making a 25 percent down payment on the house. Researchers have examined huge samples of the portfolio of defaulted loans during the 2007-2009 housing crisis. Virtually all the defaulted loans had low down payments, with many having less than 5 percent down, thanks to government "affordable housing" mandates.

Almost no loans with 25 percent down payment went into default because of simple economics: If you've paid for 25 percent of the house, and you suddenly can't make your mortgage payment, you sell the house or refinance the loan. You don't walk away from your equity stake. Duh.

The main reason I was denied a loan was because of a below-average credit score. This was infuriating on several levels. First, I have had two previous mortgages, and in 25 years I've never missed a payment. How can I be a high-risk borrower? The answer is that, twice in 30 years, I was 30 days late paying my credit card bill -- and paid the hefty late fee -- and, even more ridiculous, I, Steve Moore, have $300 of unpaid parking tickets.

The horror. How does that data point provide any useful information to a bank of whether I'm going to pay my mortgage?

This prompts another obvious question: Why in the world does any financial institution put any credence in credit rating agencies today? They were the most derelict institutions of all during the housing meltdown. These were the buffoons who were giving AAA credit ratings to mortgage-backed securities only weeks before the whole house of cards collapsed. They were the ones who ignored every warning of the subprime lending overload. They were the ones who gave Enron, Countrywide, Bear Stearns and others a clean bill of health right before these institutions famously crashed. But banks still listen to their advice on which homeowners are likely to pay off their loans?

But here is why I really want to pull my hair out. While I'm making a 25 percent down payment, the government insurance underwriters -- the Federal Housing Administration, Fannie Mae and Freddie Mac -- are backing with taxpayer dollars hundreds of thousands of loans made with as little as 3 percent down. These are the loans that will likely default. And taxpayers are on the hook for hundreds of billions of dollars.

Uncle Sam is repeating every mistake made just eight years ago. A record number of new mortgages are backed by the feds. Almost two-thirds have direct federal backing, and about 90 percent have some form of federal insurance. This is the definition of insanity.

Edward Pinto, a housing expert at the American Enterprise Institute, notes in a new study that, through Fannie, Freddie and FHA, government is relying on "looser and looser mortgage lending standards in a misguided effort to promote broader homeownership and accomplish wealth accumulation, particularly for low-income households." He shows that, in 2013, "low-income households (those in the 20th to 40th percentile of income distribution) had a median net worth of only $22,400 in 2013."

These are the people the government is forcing banks to make loans to.

So, while my tax dollars are backing thousands and thousands of loans likely to fail, my loan with close-to-zero probability of default can't get financed -- because I'm upper middle class. This is considered fairness. Only in America.