In Praise of Clarence Thomas

Star Parker
|
Posted: Jun 05, 2019 12:01 AM
Share   Tweet
The opinions expressed by columnists are their own and do not necessarily represent the views of Townhall.com. 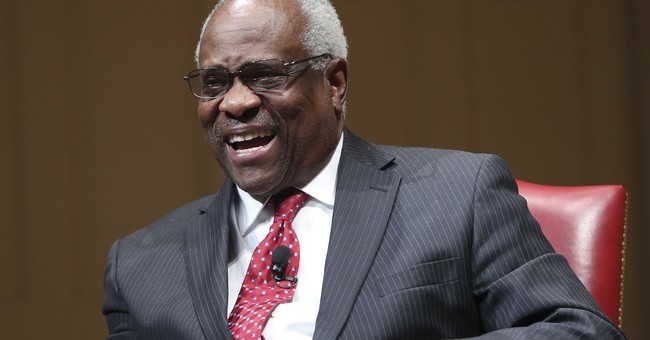 And, once again, the attacks are from liberals who cannot tolerate Thomas' consistent, unyielding and faithful commitment to America's founding principles.

The latest concerns Thomas' 20-page opinion offered up in Box v. Planned Parenthood of Indiana and Kentucky, recently considered by the Supreme Court.

The challenge was upheld in district court and the law overturned. However, the Supreme Court chose not to rule on the matter for procedural reasons, turning it back to be heard on appeal at the district level.

But Justice Thomas used the occasion to write an extended opinion on this important abortion case because the principles involved are too important to ignore for America's present and for our future.

According to the Indiana law as enacted, doctors must inform women that "Indiana does not allow a fetus to be aborted solely because of the fetus's race, color, national origin, ancestry, sex, or diagnosis or potential diagnosis of the fetus having Down syndrome or any other disability."

What liberal would ever tolerate American law protecting this type of discrimination?

Yet these same liberals are adamant that abortion for these same reasons is just fine.

Thomas seized on what is obvious, writing, "Enshrining a constitutional right to an abortion based solely on the race, sex, or disability of an unborn child, as Planned Parenthood advocates, would constitutionalize the views of the 20th- century eugenics movement."

The eugenics movement advocated public policies to manipulate the population to produce what is deemed to be a public that is genetically superior.

In other words, bureaucrats decide the value of human beings -- who's worthwhile to have around and who's not.

You would think that such ideas would produce outcries from liberals.

But what is producing outcries from them is that Clarence Thomas suggests that abortion based on these criteria makes abortion a tool for eugenics.

And he gets to the heart of the matter at the conclusion of his opinion: "Although the court declines to wade into these issues today, we cannot avoid them forever. Having created the constitutional right to abortion, this Court is dutybound to address its scope. ... The constitution itself is silent on abortion."

The nation's founders explained in the preamble to the Constitution that we "do ordain and establish this Constitution" to "secure the blessings of liberty to ourselves and our posterity."

Our Constitution was conceived to protect our liberty, not invent it.

In his dissenting opinion in the Obergefell v. Hodges case in which the Supreme Court legalized same sex marriage, Thomas wrote: "Since well before 1787, liberty has been understood as freedom from government action, not entitlement to government benefits. ... the majority ... rejects the idea -- captured in the Declaration of Independence -- that human dignity is innate and suggests instead that it comes from the Government."

Liberals cried "foul" when Thomas rightly observed that abortion based on race, sex or disability amounts to giving constitutional protection to the eugenics movement because he struck the highly sensitive note that liberals want to stand in God's place.

Liberals defining life inevitably leads to them deciding who lives and who dies.

America's founders were more humble. They saw the source of our right to life, liberty and property as God.

This strikes at the core of what divides our nation today.

Are we a nation under God, as Clarence Thomas believes, or a nation defined and run by liberals and bureaucrats?

Star Parker is an author and president of CURE, Center for Urban Renewal and Education. Contact her at www.urbanure.org.