Star Parker
|
Posted: Dec 13, 2017 12:01 AM
Share   Tweet
The opinions expressed by columnists are their own and do not necessarily represent the views of Townhall.com. 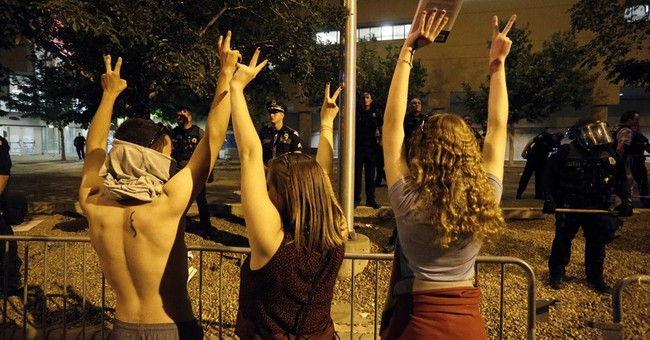 A new Quinnipiac University poll shows yet another perspective on the deep racial division in our country.

According to the poll, 86 percent of blacks compared to 50 percent of whites say that President Trump does not "respect people of color as much as he respects white people."

However the partisan divide is even greater than the racial divide.

Ninety-one percent of Democrats compared to 12 percent of Republicans agree with the statement that President Trump is racially biased against people of color.

Bottom line: What we call a racial divide today is really a partisan divide.

Consider the remarks of Rep. John Lewis, who decided to not attend the opening of the new Civil Rights Museum in Mississippi because Trump announced he would attend. Lewis called Trump's attendance "an affront to the veterans of the civil rights movement."

Or the president of the NAACP who also announced he would not attend because of Trump's attendance. NAACP President Derrick Johnson called Trump's attendance at the museum's opening "a distraction from us having the opportunity to honor true Americans who sacrificed so much to ensure that democracy works."

But the "insult" to civil rights comes today from these very black leaders who claim to represent this movement.

The leaders who fought in the 1960s for civil rights fought for freedom and against stereotyping any individual because of their race. Freedom means living and thinking freely according one's judgment and conscience. That is, blacks may have conservative as well as liberal views.

In 2016, 8 percent of black voters, or 1.2 million people, voted for Donald Trump. But these 1.2 million blacks don't exist in the view of today's "civil rights" leaders.

Like the Dred Scott decision in 1857, which declared blacks inhuman and therefore not eligible to be American citizens, so-called black leaders of 2017 declare the same status for black Republicans and black conservatives.

About 15 percent of black men between ages of 18 and 54 voted for Donald Trump.

A black leadership whose primary interest is black freedom, rather than left-wing politics, would be asking why this many black Americans voted for Donald Trump.

Republican Senator Ted Cruz introduced an amendment to the tax bill just passed in the Senate that expands 529 college savings plans, which enables tax-free savings to pay for college, to include K-12 education. This will allow all parents to save tax-free and spend up to $10,000 per year on expenses for public school, private school, religious schools and home schooling.

This has huge implications for black parents and children. America's most famous home-schooled American is Simone Biles, who won four gold medals in the 2016 Olympic games.

Soon the Trump administration and Congress will move on reforming our bloated and inefficient welfare programs. We are spending some $900 billion annually on anti-poverty programs that are helping to bankrupt the country and doing a very poor job improving the quality of life for the Americans these programs are designed to help. Black leaders should be anxious to participate in this vital and historic effort to do a much better job in how we assist low-income Americans.

It's in the interest of every African-American to start thinking about freedom. This is what the civil rights movement was about. Not left-wing politics.

Matt Vespa
FDA Clears Pfizer COVID Vaccine for 12 to 15 Year-Olds
Spencer Brown
One Voter Bloc That Democrats Are Losing in Texas...And It's a Key One
Matt Vespa