David Friedman Right Man for US Ambassador to Israel

Star Parker
|
Posted: Mar 15, 2017 12:01 AM
Share   Tweet
The opinions expressed by columnists are their own and do not necessarily represent the views of Townhall.com. 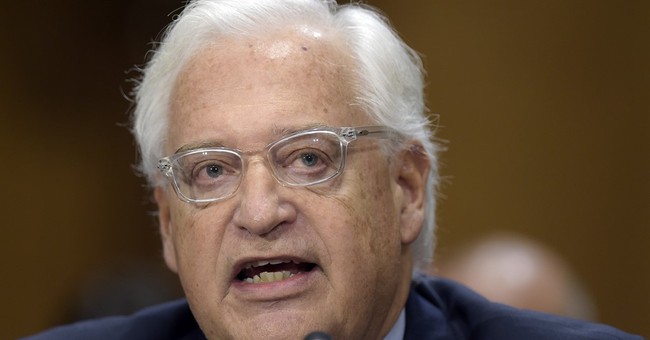 If most Democrats are not more sympathetic to a nation that shares American values than one that does not, what exactly is the Democratic Party about?

I recently had the opportunity to meet, in Washington, D.C., David Friedman, President Trump's nominee to be America's next ambassador to Israel.

I was impressed by this brilliant and passionate man, an observant Jew, a fluent Hebrew speaker (he read my necklace that has my name, Star, in Hebrew), who has the values crucial to our important Israeli ally. This is critical to re-establish American leadership in the Middle East.

Friedman is a successful bankruptcy lawyer, son of a rabbi, with a long relationship to and deep knowledge of Israel.

Friedman was just cleared by the Senate Foreign Relations committee by a 12-9 vote, with only one Democrat, Bob Menendez of New Jersey, supporting him. In all likelihood, because of the Republican majority in the Senate, Friedman will get confirmed. But most Democrats will oppose him.

Why the partisan politics regarding this good man?

Democrats don't like Friedman's past positions opposing the creation of a Palestinian state and his support of Israeli settlements. According to Senate Foreign Relations committee Democrat Benjamin Cardin, Friedman's positions undermine his credibility to be a "facilitator for a level playing field negotiation for a two-state solution."

The driving distance from the border of the Palestinian state that Cardin wants to Tel Aviv is about the same, around a half hour, as from Capitol Hill to the border of Cardin's state of Maryland. I wonder if Cardin would be anxious to have a half hour from his border an independent nation with a history of violence and terrorism that as of today still refuses to recognize the legitimate existence of his home.

Freedom House in Washington, D.C., a nonpartisan group that rates freedom in countries around the world — evaluating political rights and civil liberties — has just issued its 2017 report. It grades countries from 1 to 7, 1 being most free. Israel is among the freest nations in the world, receiving a grade of 1.5. The Palestinian Authority received the lowest possible grade, 7, dropping from a 6 rating of last year.

Not only is the Palestinian Authority an ongoing security threat for Israel, it embodies none of the values Americans cherish.

Yet, in a Gallup poll of a few weeks ago, 82 percent of Republicans expressed more sympathy for Israel than for the Palestinians, compared with only 47 percent of Democrats.

If most Democrats are not more sympathetic to a nation that shares American values than one that does not, what exactly is the Democratic Party about? More perplexing, Democrats blindly support creating another undemocratic Muslim state to add to the massive problems we already have in that region.

After sitting through her first session of the U.N. Security Council, our new U.N. ambassador, former South Carolina Governor Nikki Halley, noted, "The Security Council is supposed to discuss how to maintain international peace and security. But at our meeting on the Middle East, the discussion was not about Hezbollah's illegal build-up of rockets in Lebanon. It was not about the money and weapons that Iran provides to terrorists. It was not about how we defeat ISIS. It was not about how we hold (Syrian president) Bashar al-Assad accountable for the slaughter of hundreds (of) thousands of civilians. No, instead, the meeting focused on criticizing Israel, the one true democracy in the Middle East."

According to U.N. Watch, in 2016 the U.N. General Assembly adopted 20 resolutions against Israel and only six resolutions on the rest of the world combined, with three on Syria, one each on Iran, North Korea and Crimea.

American foreign policy, particularly in the Middle East, is badly in need of a wake-up call.

Our ally Israel, one small and lonely democracy in a hostile Middle East, is badly in need of clear, America support.

David Friedman is the right man to represent America in Israel, and I look forward to his confirmation.