Star Parker
|
Posted: Jan 11, 2017 12:01 AM
Share   Tweet
The opinions expressed by columnists are their own and do not necessarily represent the views of Townhall.com. 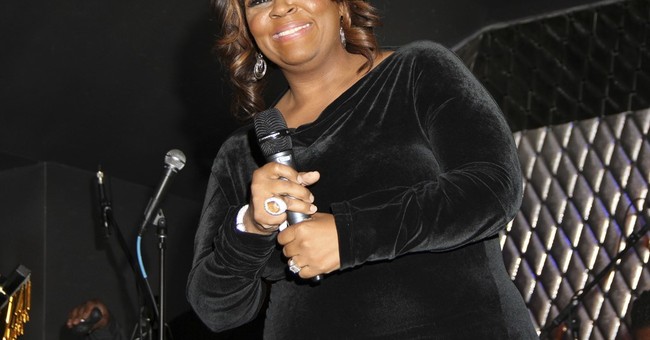 Actress Meryl Streep's political diatribe at the Golden Globes awards isn't the only surprise attention-getting provocation from the event. Nominee film "Hidden Figures," a box-office hit about the true story of three black women mathematicians who played important roles at NASA in the early days of the space program, is also generating unexpected controversy.

The controversy surrounds Kim Burrell, the black gospel singer whose song "I See A Victory" appears on the soundtrack of the film.

Burrell, in addition to being a gospel singer is a pastor, and, with the release of "Hidden Figures," a video emerged on the internet of her passionately preaching in her church against homosexuality.

Burrell was scheduled, as part of the film's promotion, to appear and perform, along with the film's soundtrack producer, Pharrell Williams, on "The Ellen DeGeneres Show." But DeGeneres, an open lesbian, canceled Burrell's appearance as a result of the video.

Next, Burrell's radio show, which is produced at Texas Southern University, was canceled. Then she was disinvited from the BMI Trailblazers of Gospel Music Awards, where she was a co-honoree.

Williams, appearing on DeGeneres's show, said Burrell is a "fantastic singer," but "there's no room for any kind of prejudice in 2017."

Wait a second. It's prejudice when a pastor condemns, in her church, behavior that the Bible, as understood by hundreds of millions of Christians around the world, prohibits, yet it's not prejudice when others make every effort to purge that person from the public space because of her faith?

As far as I know, Burrell just intended to sing on the DeGeneres show. I don't think she planned to preach a sermon about homosexuality.

Ellen DeGeneres, and the many sympathetic to her point of view, believe it is just fine to crush Kim Burrell and destroy her career because of her Christian beliefs, but they are all for using the law to force a Christian baker to make a cake for a same-sex wedding or to force a Christian photographer to work at one.

It should be clear that what motivates the pro-homosexual movement is not advancing a free and tolerant society. It is promoting a society that legitimizes their point of view and punishes, as severely as possible, those that reject it. This is fascism, not freedom.

It behooves us to point out that rejection of homosexual behavior does not come from some crank that woke up in the night and decided it's not OK.

We are talking about Biblical scripture that has been guiding Christians for a few thousand years.

Religion, of course, is about faith, not about science. It is about what is true and false, right and wrong, and how to behave and live our lives.

But if we want to bring science into the picture, data supports, in a powerful way, the importance of these traditional values.

A 2015 study, for instance, published by the American Enterprise Institute and the Institute for Family Studies, showed that states with higher percentages of children living with their biological parents in a traditional family have the highest median incomes, the fastest income growth, the lowest rates of child poverty and the greatest upward mobility.

We can bring to bear all the beauty and power of the Christian faith, and the data and research showing that following these truths lead, in the long run, to healthier and wealthier lives. But we can't make anyone follow the faith. That's what freedom is about. Letting people choose.

But what we're experiencing now is growing religious persecution in our country. Those with anti-Christian values have considerable power through the media and are using it to eradicate traditional Christian values and presence.

This cannot be tolerated. But how do we solve the problem? Do we have to go back to the bizarre state of "separate but equal" we experienced with race?