Why Can't We Stop Terror?

Star Parker
|
Posted: Jun 15, 2016 12:01 AM
Share   Tweet
The opinions expressed by columnists are their own and do not necessarily represent the views of Townhall.com. 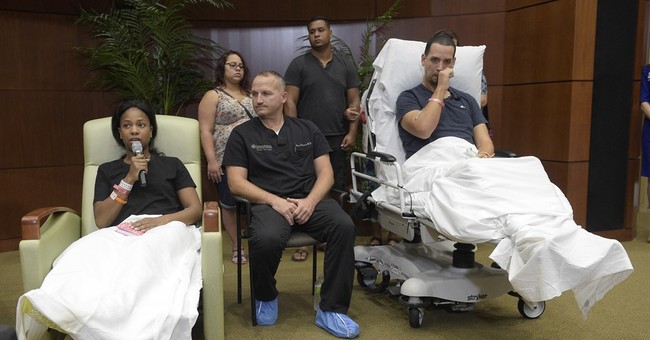 Once again, the repulsive face of terror has appeared on our homeland, our own soil. It is not a headline in the news about what has happened in some other place in the world.

Once again, we see the blood of our own countrymen shed at the hands of brutal, lawless terrorists and criminals.

And once again, we look in the mirror and think about what to do.

Israel's ambassador to the United Nations, seeking international condemnation of the act, said sadly and prophetically, "Today's heinous attack sadly proves that when the international community refuses to condemn terror against Israelis, the next attack is only a matter of time. ... Terror in Tel Aviv must be treated the same as terror in Paris or Istanbul." Of course, the ambassador had no clue he could have also said Orlando, Florida.

There most certainly will be renewed calls to examine and improve our homeland security operations.

But as these discussions about security operations at home, and possibly military operations abroad, move forward, I hope that a different discussion also takes place. A discussion that is critical but that most do not want to have.

President Reagan defined this in a speech he gave in March 1983 to the National Association of Evangelicals. It was the famous speech in which he called the Soviet Union an "evil empire." He went on to say as follows:

"While America's military strength is important, let me add here that I've always maintained that the struggle now going on for the world will never be decided by bombs or rockets, by armies or military might. The real crisis we face today is a spiritual one; at root, it is test of moral will and faith."

A few days following the attacks on Sept.11, 2001, the late Rev. Jerry Falwell Sr. appeared for a discussion with Pat Robertson on Robertson's CBN TV show.

Falwell delivered basically the same message that Ronald Reagan conveyed 18 years before. He said the root of the crisis we face is a moral crisis.

For these remarks, Falwell and Robertson were widely condemned.

But look where we are today. We have defined all the evil in the world as outside of our borders and have done no soul searching of our own.

Terror is about wanton disregard for life and property. It about imposing one's will on others to the point of murder.

Since Falwell's remarks on CBN, almost another 20 million unborn children have been killed. And the federal government uses taxpayers' money to direct funds to Planned Parenthood, the nation's largest abortion provider.

Sadly, today we are not a nation that respects life. And the increasing power of the federal government, extending its growing reach into the lives of private citizens, shows our nation has decreasing respect for private property.

Reagan was right. We will not be victorious over terrorism with might alone. Behind that might must be a virtuous and moral nation that all nations respect. We must be a nation that knows how and when to use power, and against whom, because we know the difference between right and wrong.

Of course we need to fight terrorism. But we have not made more progress in this war because we have failed to address the spiritual and moral crisis within. Without doing this, this will be, as Rev. Falwell said in 2001, "only the beginning."