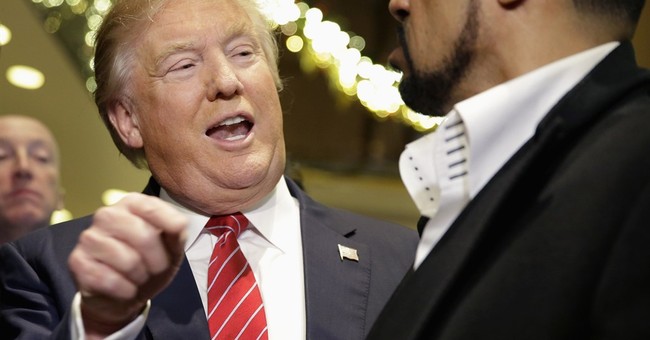 Although there is a sense that Donald Trump's unusual and outlandish run for the presidency is the first ever of its kind, this is not entirely true.

Californians, such as myself, remember how Arnold Schwarzenegger captured the governorship of California in 2003, in a campaign remarkably similar to Trump's. Obviously, governor of California is not the same as president of the United States, but it is the chief executive of the nation's most populous state.

That year, California's incumbent Gov. Gray Davis, a Democrat, was pulled from office in a recall election. It was a time of disillusionment and cynicism toward the governor and government, amidst a poor economy and rising energy prices.

Schwarzenegger had long held political aspirations. He was a wealthy man from his career as a bodybuilding celebrity, film star and businessman. He saw this as his opportunity and ran for the Republican nomination.

He fell back on his movie persona as "The Terminator" to pitch California voters that, despite no political experience, he could go to Sacramento and kick "butts" and get the government in order.

"I know how to sell something," the political novice justified his candidacy.

"What the people want to hear is ... are you tough enough to go in there and provide leadership? That's what this is about, and I will be tough enough," the Terminator assured California voters.

Once elected, the butt-kicking tough guy discovered the realities of two-party government. When the state legislature pushed back against what he wanted, Schwarzenegger called them "girly men."

The Cato Institute, which issues a bi-annual Fiscal Report Card on America's governors, grading them A to F on their fiscal performances, awarded Schwarzenegger a D in his final years as California's governor.

Here's Cato's summary of Schwarzenegger's governorship: "Schwarzenegger has made some reforms to California government, but he will be handing over a giant economic and fiscal mess to the next governor. State unemployment is over 12 percent, the state's pension system has massive funding gaps, and the state's bond debt has exploded. According to Moody's, California's state debt soared from 2.5 percent of state income when Schwarzenegger came to office in 2003 to 4.4 percent in 2009. The rising debt is a looming threat to state taxpayers, yet California's personal, corporate, and capital gains tax rates are already some of the highest in the nation."

As I have written before, political campaigns are job interviews. The job applicant, or candidate, goes before the employer, or voters, and explains why they should hire him or her. Any savvy employer looks for demonstrable evidence that the job applicant is qualified. You look for consistency between what applicants say they can do and what they have actually done.

Political leadership is not like running a business. Business is a dictatorship. In government, even the president is limited in power. You can't summon those who are not cooperating and say, "You're fired."

Worse, Trump's business record shows he loves to use government power to advance personal interests. His use of eminent domain laws to evict low-income residents in order to build casinos is particularly offensive.

Donald Trump is a world-class marketer. Like Arnold Schwarzenegger, he is doing a great job telling frustrated voters what they want to hear. But even if you agree with what Trump says he wants to do, he has little experience or record that I can see that shows he can achieve any of it once elected.

It's a good time to remember the warning "caveat emptor." Buyer beware.