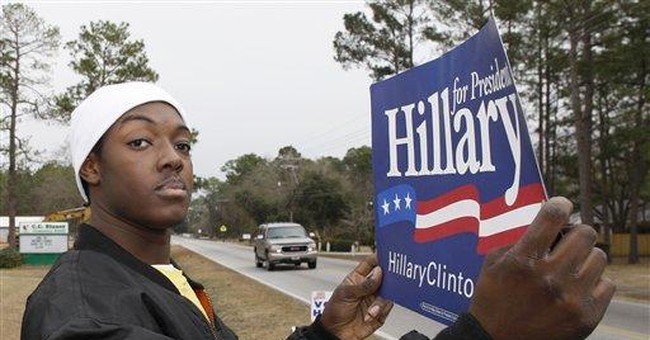 Trending
An ongoing point of contention in the Republican Party has been the extent to which clear identification with traditional Judeo-Christian values is a good idea.

My sense is that, when we add to the equation the growing impact of non-white voters, standing strongly for these traditional values -- which would put Republicans in stark contrast to Democrats -- would be a win-win for Republicans.

My organization, CURE, just convened a meeting in Washington, D.C., of 25 black pastors from around the country, each with an average congregation size of about 1,000, to discuss ideas and policy. These are black Americans but they are also Christians, and it is their Christianity that defines their lives.

Listening to these black pastors and to many black Christians who approach me in my travels around the country, I hear growing concern about the indifference and disengagement of the Obama administration from the values they hold most dear.

The latest example is the silence of this administration on the genocide occurring in the Middle East toward Christians.

We watch in horror as hundreds of thousands seek refuge, displaced by the violence in Syria, Iraq and elsewhere in the Middle East. No one should be indifferent to human injustice and suffering of any kind.

But this persecution of Christians is unique, because ISIS and other militant Islamic groups are explicitly targeting Christians for destruction.

The Hudson Institute's international human rights attorney Nina Shea writes, "In the summer of 2014, ISIS launched its caliphate from Mosul (in Iraq) by marking Christian homes with the red letter 'N,' for 'Nazarene,' before confiscating them and exiling their owners."

Britain's Sunday Express reports, "More than 700,000 of Syria's population of 1.1 million Christians have already been forced to leave." It is believed there are now no more than 250,000 Christians living in Syria.

Yet the American president, who claims to be a Christian, sits frozen. We hear no strategy for either military intervention or a systematic plan to provide refuge to these Christians.

Meanwhile, at home, Republicans have been unable get through legislation that would end taxpayer funds flowing to Planned Parenthood, despite what is now known about the nation's largest abortion provider trafficking in infant body parts.

Republicans have not succeeded in stopping our taxes funding this organization because President Obama will veto any such effort and sufficient Senate votes do not appear present to override the veto.

And of course, the Obama administration has been aggressive in its support of homosexual initiatives and the redefining of marriage, something that does not sit well with many black Christians.

Too many conservatives very mistakenly believe that black votes cannot be moved from the liberal party.

It's worth noting that despite the projected large growth in the Hispanic population, there are still more blacks voting than Hispanics. In the 2012 election, 13 percent of those voting were black, and 10 percent were Hispanic. There were about 4 million more black votes than Hispanic votes.

Also worth noting is that in 2012, for the first time ever, blacks, at 66.2 percent, had the highest voter turnout rate in the nation. And it's not just because of Obama. Black voter turnout has increased in every presidential election since 1996, when it was 53 percent.

Politico has identified 7 states as "toss-ups" in 2016. The three with the most electoral votes -- Ohio, Virginia and Florida -- went to Obama in 2012 and to George W. Bush in 2004. And in all three of these states black turnout exceeded white turnout in 2012.

The black vote can be a game-changer in 2016. Republicans have an opportunity to capture black voters by aggressively representing the Christian values that are dear to them and critical to the future of their communities and the nation.