Protect us, don't expropriate us 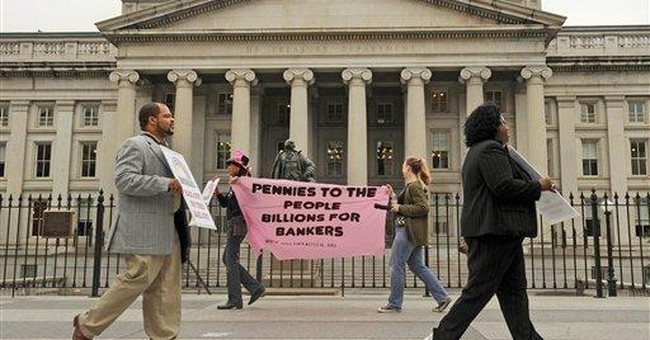 As our presidential candidates drone on about our current financial crisis being caused by greedy Wall Street CEOs, a study just released by Canada's Fraser Institute points to what the real problems are in the United States.

This is an annual compendium called Economic Freedom of the World, which the Fraser Institute produces, in cooperation with an international network of free-market think tanks.

What is economic freedom? The study provides ranking in five areas: size of government, legal structure and security of property rights, access to sound money, freedom to trade internationally, and regulation of credit, labor, and business.

The troubling news in this year's report is the precipitous drop in the economic freedom ranking of the United States. The U.S. has dropped from No. 2 in the world in 2000 to No. 8 in 2008.

According to the study's press release, only five other countries -- Zimbabwe, Argentina, Niger, Venezuela, and Guyana -- experienced a greater decline in economic freedom over the same period.

Again, the great concern here is that the most powerful predictor of national prosperity is the extent to which a nation is economically free.

As regular folks around the country watch Washington power brokers ram through the financial industry bailout plan, what I think most find deeply troubling is seeing so clearly how insecure our property is.

It's almost incomprehensible that, in the course of a few days, politicians can slap together a package in which they will take almost a trillion dollars of our money to buy the trash securities being held by various financial institutions. And that this is legal.

It is certainly not an indicator of a good state of economic health or freedom when private property can be expropriated this easily.

But how many realize how long and to what extent this has been going on?

As Charles Calomiris, of Columbia University, and Peter Wallison,of the American Enterprise Institute point out, because of tax-payer backing, Fannie Mae and Freddie Mac "were able to borrow as much as they wanted for the purpose of buying mortgages and mortgage-backed securities." And, according Calomiris and Wallison, as they pursued a mission to encourage "affordable housing," they enabled massive growth in the amount of shaky sub-prime loans flowing to the marketplace over the last few years.

It's incredible how generous you can be with other people's money. While taxpayers were driving their kids to school and going to work, politicians were setting them up to guarantee the debt of mortgage-backed securities buying behemoths.

It's the increasingly shaky state of the law -- both as it defines the constitutional limits of the federal government and the integrity of our private property -- that sits at the core of our problems today.

It stands to reason that if all it takes is a smooth talking politician to expropriate the property of individuals or businesses, that the ability and willingness to work, save, invest and do business will suffer. And that prosperity will decline.

Barack Obama is running for president to save us from ourselves and give politicians even more sway over our private lives and property. He's telling us that it's "Wall Street CEOs whose greed and irresponsibility got us into this mess."

But Obama sat by in silence as the Senate tried to reform Fannie Mae and Freddie Mac in 2005. And he's taken $126,349 in contributions from Fannie and Freddie, second highest in the Senate (only behind Banking Committee chairman Chris Dodd).

The decline in economic freedom in the U.S. is what should concern us today. We need less political hot air and fewer politicians who want to degrade the very law that is there to protect us.

This is what citizens should be looking for as we try to get out of today's mess.