Remind Hispanics that it's about freedom 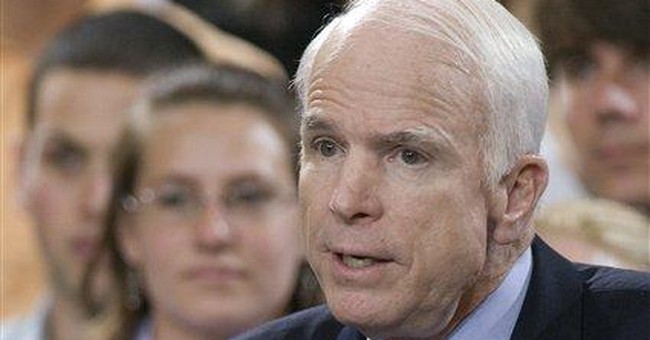 John McCain is trailing Barack Obama by 30 percentage points in support from Hispanic voters, according to this week's polling from Gallup. Even among Hispanics that self-identify as conservatives, McCain and Obama are even.

This is a far cry from 2004 when George W. Bush captured 45 percent of the Hispanic vote. At that time, Republicans were optimistic that Hispanics would become a majority voting bloc for the Republican Party.

The McCain campaign has two operative questions: Can ground be picked up among Hispanic voters? And if so, how?

I hope that the senator sets his sights on Hispanics. If he does it right, he can gain support from them and in so doing, also inject badly needed focus and excitement into his overall campaign.

A year ago, when it was far from clear that John McCain would be the presumptive Republican nominee, his defining issue was the war in Iraq. As public support for the war wavered, he put his popularity on the line, arguing that we must push on. "I'd rather lose an election than lose a war," he said.

Now, as the presumptive Republican nominee, McCain should take this same stubbornness and sense of principle and apply it to the broad agenda he needs to push.

Hispanics are the youngest major demographic group in the country. Their median age is 27, compared to 36 for the overall population. They account for 14 percent of our population today, but this is projected to increase to 29 percent by 2050.

As a population that is young and rapidly increasing, with a growing stake in the future of this country, Hispanics should be thinking hard about what kind of future that will be.

Long-term economic growth is vital. In the U.S. and all over the world, studies have demonstrated that low taxes foster growth and high taxes inhibit it. Hispanic citizens should be taught that keeping taxes low limits the growth of government and is essential to their economic future.

Hispanics should understand that today's entitlements crisis will fall disproportionately on them. Combined spending today on Social Security, Medicare, and Medicaid is about 8 percent of our gross domestic product. By 2050, when almost a third of Americans will be of Hispanic origin, this entitlement burden will more than double to around 18 percent of our GDP. Our payroll tax burden will also have to double to meet these obligations.

Fundamental reform of entitlements should be of particular interest to Hispanics.

Consider the proposal, now at a standstill, of changing Social Security from a tax-and-spend program to an ownership regime.

According to the Heritage Foundation calculator, today's 27-year-old Hispanic male can expect a -.7 percent return on his payroll taxes at retirement. If he could keep those payroll taxes and invest long-term in a highly diversified portfolio of minimum risk, he'd more than triple his monthly retirement income.

In a 2005 survey done by the Pew Hispanic Center, 49 percent of Hispanics favored personal retirement accounts.

Colin Powell's organization, America's Promise, released a study earlier this year reporting the nationwide graduation rate from our public schools at 76.2 percent. Among Hispanics that rate is 57.8 percent. The Los Angeles Unified School District, where the majority of students is Hispanic, had a graduation rate of 45.2 percent.

Hispanics should be clamoring for challenging the government school monopoly and pushing for change that Republicans and conservatives have been championing for years. School choice.

Hispanics should be reminded that they left countries like Mexico, Cuba, and Honduras, where excessive and oppressive governments limit growth and opportunity, to come to a country where opportunity exists. Why would they want to kill the goose laying those eggs of opportunity by supporting the same kinds of ideas about government that they left behind?

Individual freedom, limited government, and traditional values combine to create the American recipe for greatness. McCain must tell the story and provide stark contrast with the big government and moral relativism being sold again by Democrats.

Hispanics may grasp the truth when they hear it.

If not, at least he will have said what needs to be said. After all, everyone's future is at stake.