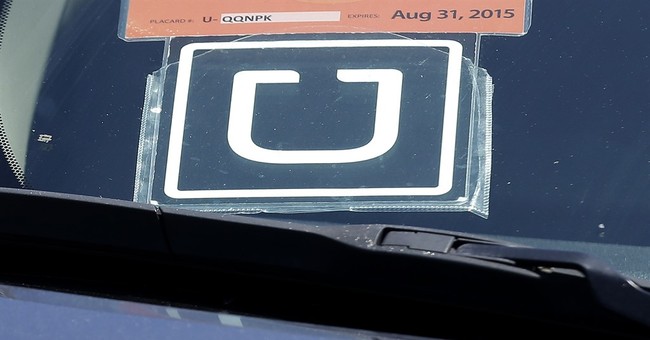 Trending
Politicians are often accused of pandering and rarely wage public fights against things that are popular with their voters. That's what makes the willingness of politicians to take on Uber and the sharing economy all the more puzzling. Why on earth do they want to antagonize the tens of millions of Americans who benefit from the Uber service as consumers and drivers?

New York Mayor Bill de Blasio is the latest to get burned trying to stand in the way of the sharing economy. In an interview with CBS2, a local TV station, he offered this explanation: "I think there's a resolute feeling among mayors all over this country and this world that no private company gets to dictate the rules to government. We have the public's interest in mind, and so we're going to strike that balance."

This is the noble myth of politician as public servant. Somehow winning an election turns a typical politician into someone who thinks only of the public interest!

But de Blasio's statement reveals more than the mayor intended. Uber wasn't dictating any rules to government. It was providing a service to drivers and consumers. There was no particular need for the government to get involved. Standard driving and insurance regulations covered all drivers and passengers, including those working with Uber.

So why was it necessary to create new rules to slow Uber down?

The short answer is that owners of traditional taxis were upset by the competition and donated heavily to de Blasio's campaign. At that level, this is just a story of another politician trying to do a favor for a donor.

But there's more to it than that. The giveaway is de Blasio's line claiming "we're going to strike that balance." The mayor wants special rules created for Uber so that his administration can determine the right "balance" between the interests of Uber and the taxi companies. The public interest gets lost along the way.

Consider this: Uber is offering better service at lower prices than the heavily regulated taxi cabs. Not only that, but the ride-sharing company is providing more service to minority and low-income neighborhoods typically overlooked by the yellow cabs. A mayor truly concerned with the public interest would hail the benefits of competition and free the taxis to compete with Uber.

In that case, customers would provide the regulation. They would determine who offers the best combination of service and price. Uber customers can even rate their drivers, which is a far stricter level of regulation than any government bureaucrat will provide.

The only problem with such an approach is that there's no role for the politicians. No reason for them to get involved and solicit campaign contributions or jobs for their friends.

To most of us, that's a good thing.

But to politicians, it's the reason they are willing to go to such lengths to fight the sharing economy.

From the beginning, the Internet has been cutting out middlemen in industry after industry. Now, the sharing economy is highlighting the fact that politicians act as middlemen trying to broker deals for their own self-interest.

The sharing economy is also showing that consumers don't need such middlemen.