Scott Morefield
|
Posted: Mar 01, 2021 12:01 AM
Share   Tweet
The opinions expressed by columnists are their own and do not necessarily represent the views of Townhall.com. 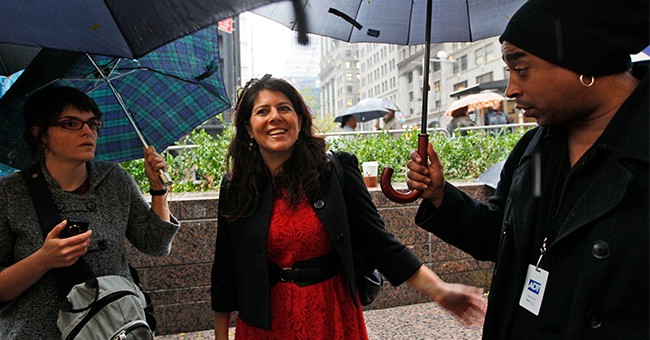 When a verified account called “Dr. Naomi Wolf” began liking a few of my COVID-related tweets a while back, I didn’t think a whole lot of it, really. After all, lots of doctors and epidemiologists are on "Team Reality." They just don’t get all the mainstream media coverage (and respect) afforded the Chicken Littles over at Team Apocalypse. Color me ignorant (and I was!), but it wasn’t until after I saw her now-famous appearance last week on “Tucker Carlson Tonight” that I learned that Dr. Naomi Wolf is not, in fact, a truth-telling epidemiologist, but rather a truth-telling high-profile Oxford-educated author, speaker, Democratic political advisor, and founder of something called third-wave feminism.

Obviously, none of that means that Wolf can’t have a valid, studied opinion on COVID-19. Quite the contrary, plenty of journalists, activists, data scientists, and "ordinary" people who know how to read graphs and interpret data are also a part of "Team Reality," and thankfully so. However, in the U.S. at least, little opposition to COVID fascism, governments’ often draconian, liberty-crushing, life-destroying response to the ongoing COVID-19 pandemic, has come from the left, much less a high-profile feminist author who has advised the likes of Bill Clinton and Al Gore.

“Nowhere in the Constitution does it say, all this can be suspended if there is a bad disease,” Wolf told Tucker Carlson. “We have lived through typhus, cholera, smallpox, HIV, tuberculosis, polio, the Spanish flu. We've lived through an attack on our soil. Never have there been months and months and months of emergency powers when we weren't actually fighting a war. So this is completely unprecedented. Lockdowns have never been done before in free societies. And really, we are turning into a version of totalitarian states before everyone's eyes. And I really hope, you know, we wake up quickly, because history also shows that it's a small window in which people can fight back before it's too dangerous to fight back.”

So yeah, coming from a liberal, all that was a little bit of a surprise. Doubtless, someone like me would disagree with Wolf on many things. Indeed, Fox News host Tucker Carlson seemed as shocked as many of us undoubtedly were during the interview by some of his guest’s grounded, well-thought-out positions on this issue.

“I'm so embarrassed, and it's just another example - there are a million of them - of why partisanship is stupid, and it makes you stupid,” Carlson said after one of Wolf’s particularly based arguments. “And I guess I just assumed that we wouldn't agree on stuff, so I didn't read your tweets, and I obviously should have been and I missed a lot. And so again, it's nice to remember, you should treat people as individuals rather than as standards for whole political parties.”

Indeed, what a great reminder. These days, "liberal" and "leftist" are hardly synonyms. Anyone on the right is happy to work with a liberal who agrees with us on basic issues like freedom of speech, censorship, and government overreach. A leftist, however, sees nothing but power, and ideological enemies in the way of it who must be removed at all costs. In order to want to work with us, they’d have to actually agree with us on something.

As Wolf went on to lambast the unparalleled government overreach brought on by our response to COVID-19 and the lack of “real science” underlying many of the measures, I thought about all the amazing things that could be accomplished if freedom-loving people put aside their differences and worked together for a common good. Naomi Wolf is certainly a liberal, but she doesn’t appear to be a hard-core leftist.

Sadly, plenty of REAL hard-core leftists on Twitter were quick to denounce Wolf not just for her views on COVID, but for appearing on Carlson’s show altogether. And as things always do when it comes to leftist denunciations, things quickly turned personal.

“Hate to break it to people who don’t see Tucker Carlson for the maggot he is, but Naomi Wolf was nuts even when she was a "liberal" - and she hasn’t been a liberal since about 1998,” spewed former mildly amusing sports commentator turned leftist whack-job Keith Olbermann.

“Naomi Wolf ritually completes her transformation to reactionary goon in the accepted fashion; by going on Tucker Carlson,” wrote Atlantic writer Noah Berlatsky, who went on to accuse Wolf of fighting “on the same side as the deadly pandemic.”

The Daily Wire’s Ryan Saavedra and Townhall’s own Matt Vespa took some issue with Wolf’s post-election tweet expressing buyer’s remorse for a pro-lockdown Joe Biden. I get it. All of us already on the right knew exactly who Biden was and how he would approach COVID, but I’m also of the firm opinion that "late" is far better than "never."

I’m still on Twitter, but I’m also working on building alternate platforms (as we all should). To that end, please consider following me on Parler, Gab and friending me on MeWe (I will accept all contact requests). Also please be sure to follow my COVID ‘Team Reality’ Twitter list, 170+ doctors, medical professionals, analysts, data hounds, media, and politicians unafraid to tell the truth about COVID-19.