Is a National Split Inevitable?

Scott Morefield
|
Posted: Dec 14, 2020 12:01 AM
Share   Tweet
The opinions expressed by columnists are their own and do not necessarily represent the views of Townhall.com. 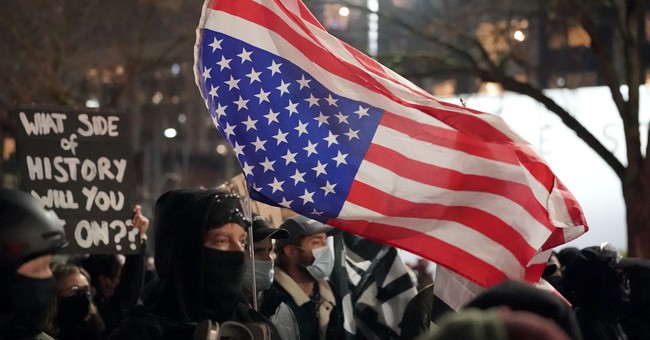 Is America “trending towards secession”? Conservative radio legend Rush Limbaugh got into some hot water last week for daring to attempt to answer that question. Unless you’ve been living under a rock, you probably heard about it. From Media Matters to Geraldo Rivera to every left-of-center blue-check Twitter account, critics were basically accusing the legendary broadcaster of treason, even though he never explicitly endorsed the concept himself.

It’s a far cry from only four years ago, of course, when the “Calexit” movement made news as a novel concept put forth by lovable, if a bit rambunctious, leftists frustrated at the election of Donald Trump. Obviously, when a liberal wants to secede, it’s perhaps a bit misguided but understandable, but when a conservative even broaches the topic, it’s a treasonous reintroduction of slavery, or something.

The blatant media double-standard notwithstanding, what should we make of Limbaugh’s observations?

“I actually think that we’re trending toward secession,” Limbaugh said Wednesday, responding to a question from a listener about conservatives being able to win national elections after Trump. “I see more and more people asking what in the world do we have in common with the people who live in, say, New York? What is there that makes us believe that there is enough of us there to even have a chance at winning New York, especially if you’re talking about votes?”

“There cannot be a peaceful coexistence of two completely different theories of life, theories of government, theories of how we manage our affairs,” he continued. “We can’t be in this dire of a conflict without something giving somewhere along the way. I know that there’s a sizable and growing sentiment for people who believe that that is where we’re headed whether we want to or not.”

Limbaugh later in that particular monologue and also the next day made it abundantly clear that his preference is to “find a way to unite and win.” It’s certainly my preference too, but then again our generations and those before it grew up in an America where Manifest Destiny, the concept that the United States’ growth from the Atlantic to the Pacific was justified and inevitable, was praised in history class as a noble thing. I remember studying each acquisition, from the Louisiana Purchase to the Mexican Cession to the purchase of Alaska, as amazing, hard-fought, and even miraculous wins for the Good Guys. The left now views them as something else entirely, but I don’t care. The thought of ceding any of this land, won fair and square over many decades with the blood, sweat, and tears of our ancestors, to a bunch of godless communists hellbent on destroying everything they touch is anathema to every fiber of my being.

Even so, Limbaugh is obviously correct about the ongoing cultural divide. Many have argued that this country has been experiencing a bloodless “civil war” for years, one between producers and takers, between freedom-lovers and those who would invoke tyranny to accomplish their evil ends. The difference could not be more evidenced by the divide between the 75 million who voted for Trump versus the (allegedly) 80 million-plus who voted for Biden. On every major issue, from policing to tax policy to immigration to judicial activism to the Second Amendment to abortion to whether or not there are 16 genders, the difference is night and day. “How can these people be so ignorant?” each side asks while looking at the other side like they’ve got three eyes and two noses.

Several years ago, Dr. John Gottman proved unequivocally that one behavior had an astoundingly predictive effect on whether or not a marriage would last. That behavior is “contempt.”

“Contempt is fueled by long-simmering negative thoughts about one’s partner, and it arises in the form of an attack on someone’s sense of self,” Gottman writes. “Inevitably, contempt leads to more conflict—particularly dangerous and destructive forms of conflict—rather than to reconciliation. It’s virtually impossible to resolve a problem when your partner is getting the message that you’re disgusted with them and that you’re condescending and acting as their superior.”

Sound familiar? If "contempt" isn’t right smack dab in the middle of the ongoing political and cultural wars, I don’t know what is. All of which leaves two key questions: 1.) If America is already split apart ideologically, will geography eventually follow? And 2.) If a geographical split happens at some point, is it possible to do so peacefully?

In a section of his book titled, “American Secession: The Looming Threat of a National Breakup,” George Mason University School of Law professor F.H. Buckley argues that such a split could occur, constitutionally even, with no bloodshed at all.

“Instead of the Civil War, think of the ‘velvet divorce’ of the Czechs and Slovaks in 1993,” Buckley writes. “Distinct in religion, language and culture, they had been combined in a country created in 1918 after the collapse of the Austro-Hungarian Empire. The Slovaks were conservative and agricultural while the Czechs liked avant-garde plays and rock music. Czechoslovakia suffered through Nazi and Soviet rule, and then split apart into Slovakia and the Czech Republic upon the fall of communism. The two new countries, both Western and liberal, solved questions about their border, the division of assets and assumption of public debt through negotiation, and they’ve since maintained the friendliest of relations.”

Buckley argues that since the stakes “have been lowered” significantly since the 1860s when secession meant the literal continued enslavement of millions, such a measure indeed could be a “reasonable way to resolve unbridgeable partisan differences.”

Expect more talk of secession coming from the right, especially if the radical socialists win those two Georgia Senate seats and go on to pack the courts, eliminate the filibuster, and jam through every leftist wet dream from defunding the police to the Green New Deal. Already, the chairman of the Texas Republican Party is on board, and a Twitter poll (real "science," I know) from conservative writer Matt Walsh with 52,000 respondents showed over 60 percent agreeing to “support a plan to break up the United States so that the Left and Right can live in separate countries.”

Now that they’ve won electorally, of course, the left stands firmly on the side of unity, at least for the time being. Such talk is “treason” now, don’t you know, not because they ever had any respect for America’s borders and the freedom residing therein, but because they need producers, taxpayers, serfs to work their newfound socialist utopia. You see, their vision of America is more Panem than City on a Hill, and it takes a whole lot of proletarians to keep the elites – of which they fully intend to be a part – fat, comfortable, and happy in their walled-off enclaves. No, it’s not like pre-1865 chattel slavery, but it’s servitude nonetheless, and it’s something the left is surely willing to go to war to keep. (And yes, I’m aware of all the levels of irony).

A national split in my lifetime would be an awful, painful thing to see, even if it happened without bloodshed. It would, however, be far preferable to living under a Democratic Socialist, one-party state. While most Americans right now truly aren’t wishing for any sort of hot OR cold civil war, national divorce, or even peaceful separation, it’s hard not to see something along those lines on the horizon if things keep going the way they’re going. Admitting this isn’t ‘treason,’ it’s reality.