Scott Morefield
|
Posted: May 03, 2020 12:01 AM
Share   Tweet
The opinions expressed by columnists are their own and do not necessarily represent the views of Townhall.com. 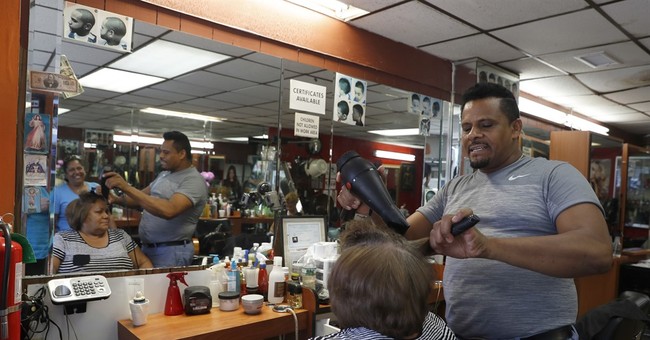 In the eyes of many, Dallas salon owner Shelley Luther has become the latest face of justified resistance against governmental tyranny for her steadfast refusal to back down on keeping her business open despite the prospect of going to jail.

Luther’s Salon a la Mode opened for business last Friday, then promptly got slapped with a court order to close because of coronavirus restrictions. Instead of meekly complying, as most others doubtless would have, Luther stood outside her salon and literally ripped the thing to shreds. Indeed, it was a moment that would have made Patrick Henry proud. (I’m also pretty sure it would have made another person with the surname “Luther” proud too.) The salon owner told media she has “had enough” of stupid, nonsensical restrictions on her livelihood and that of her employees, and is more than willing to go to jail to make her point.

Good on her. The continued enforced closure of hairdressers, barbershops, salons, and the like are one of the most ridiculous in a sea of ridiculous aspects of the current coronavirus lockdown insanity. Turns out, while the generally solid GOP Texas Gov. Greg Abbott has finally signed off on allowing some types of businesses to open, salons and barbershops inexplicably aren’t yet among them. They are “nonessential,” don’t you know, and the people who work in them apparently don’t deserve the same chance to feed their families that others do.

Insisting that salons are still not “safe,” Dallas County Judge Clay Jenkins ripped Luther and other like-minded business owners as supposedly “putting their own need to make money ahead of public health.”

But Luther disagrees: “It’s pretty ridiculous to think that our place would be unsafe. The second part of that is we’re all grown adults. We decide where we want to go and if someone does not want to come in the salon, I respect that decision.”

Truly, is there any logical reason to think salons and barbershops are any less safe than most any other public place, particularly if owners and employees utilize masks, gloves, and regularly sanitize between customers?

Another business owner, California barbershop operator Juan Desmarais, received what Tucker Carlson called a “self-righteous scolding” from CNN’s Brooke Baldwin for his decision to open up his shop. Despite the California government’s anti-Constitutional power grabs, Desmarais intends to try to make a living for his employees and his family, insisting that he is more than capable of ensuring proper sanitation measures are in place to prevent the spread of the virus.

Here in Tennessee, Governor Bill Lee also excluded such businesses from his initial reopening phase. However, he relented under pressure and is allowing them to open up this coming Wednesday. My sister, the owner of a high-end salon in east Tennessee, was more than a little frustrated and might have even considered going the Luther route, until Lee changed his mind.

“We can control contamination much better than a restaurant,” she told me. “You can’t eat with a mask on. In a salon, you can be one on one. You are not touching other clients in between. The stylist and the client can have a mask on when cutting or color is being applied.”

Her reopening plan is probably not unlike those of other hair shop owners:

“Our plan is to keep the door locked and allow only one person in per stylist,” she said. “Clients will wait in their cars, not the waiting area. Further, our front desk person will use an infrared thermometer to check temperatures before anyone is allowed inside. Sterilize each workspace, then change gloves and wash hands between clients. No magazines, no handing drinks out. Provide masks for those that do not have them.”

Sounds pretty safe to me. Safer, in fact, than Walmarts, price clubs, home improvement retailers and grocery stores across the country have been the entire course of this ridiculous lockdown. Our leaders, for some odd reason, have decided that it’s better to crowd everybody into a few specific locations rather than spread things out and trust informed, adult humans to be responsible. While they pay lip service to “science,” these morons refuse to listen to it when it gets in the way of their inane power trips.

The actual “science,” as Copenhagen Consensus Center president Bjorn Lomborg explains, tells us that the only thing forever lockdowns are efficient at is destroying economies. "You can't have a strong lockdown forever,” he said. “If you look at what most epidemiologists tell you to do, is to flatten the curve so that your health system can handle this and that's what Sweden has been doing."

Isn’t that what we were told in the beginning, before the goalposts moved? Despite near-universal world condemnation, Sweden did it, and they are now well on their way to the only thing that can ultimately stop this virus - herd immunity. They showed, conclusively, that the curve can be flattened with minimal impact to the lives and livelihoods of ordinary citizens. Salons and barbershops in many states across America are about to show it too, and it can’t come a moment too soon for a certain columnist in need of a serious haircut!