All News Is Local

Salena Zito
|
Posted: Oct 10, 2017 12:01 AM
Share   Tweet
The opinions expressed by columnists are their own and do not necessarily represent the views of Townhall.com. 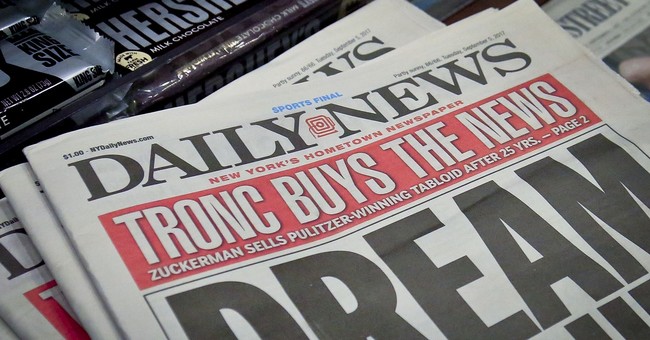 WEST NEWTON, PA -- There used to be 324 newspapers in the state of Pennsylvania.

The Pennsylvania Gazette is the first one on record not just in the colony of Pennsylvania but in all of the Crown's colonies. Benjamin Franklin bought the paper with a partner in 1729, and he contributed to it, as well, mostly under aliases.

Among the many firsts, the plucky paper would print the first political cartoon in America, "Join, or Die," authored by Franklin. It also printed the then-treasonous texts of the Declaration of Independence, the Constitution, Thomas Paine's "Common Sense" and the Federalist Papers.

It was bold. It was brash. It was opinionated. And it served its readers well.

Here in West Newton, only ghosts remain of its once "esteemed" Times-Sun; their first office along the railroad tracks carries only a faint trace of its existence on the side of the building.

When owner James Quigley Waters Jr. died in 1930 after running the paper for 34 years, local papers noted it widely. When it was forced to close that location nine years later, it was noted only by an ad in the Pittsburgh Press for the sale of the Times-Sun building and its presses.

Several decades later, the Times-Sun existed on Main Street as a weekly. All print ended in 2015, and all that is left now is a shuttered office on Main Street.

There rarely is a proper obituary for old newspapers, nothing to chronicle their coverage of town events: how the school board was caught in a corruption sting; how a local politician was caught taking cash in a bag; and how the town rallied when flood waters crested the banks of the Youghiogheny or when the train derailed.

Along with that death comes the death of the local reporter: the person who knows his or her community inside and out, a career that typically starts with the cops beat or the local school boards, the places where a reporter really gets to know the pulse of their hometown and their people. Who knows how the town ticks. Who knows where the bad guys are, both on the street and behind a podium.

Who knows fundamentally that all news and politics is local.

Good journalism is not glamorous. It's not sexy. It means long hours; it often means no personal life; it means driving on rural roads where there are more deer than people or down alleys where the state of the bodies you see outlined with chalk behind yellow tape will haunt you forever.

As with everything in this country, automation and technology have erased many jobs for reporters. The digital age opened up a world where everyone could have a blog, and none of them had three layers of editors fact-checking them.

That does not mean they don't still do this in New York or Washington. It's just that these days they do it less in the rest of the country.

Newspapers are expensive and bleed money: The ability to make money left with the dawn of digital and no one really figured out the secret sauce to help small towns support local news organizations.

Two weeks ago, Bob Schieffer cited a statistic that showed journalism is thriving only in the geographical seats of power on our coasts, noting that 1-in-5 reporters live in New York, Washington or Los Angeles.

That geographical realignment means that America's reputable news outlets are run by people who have never likely covered or understood the lives of many of their consumers.

Not only are there few cultural touchstones between the news deliverer and the consumer but also there are often no news stories that are critical to the consumer. It's not merely all politics that are local; all news is local. And if there is no trust in that relationship, people go elsewhere -- such as Facebook and Twitter, where they only consume "their" side of the news, not because they are unintelligent but because they don't trust the national news organizations.

When those news reporters report on church attendance or gun ownership, neither side holds the same values. Who in D.C. or New York goes to a "Gun Bash"? In the West Newtons of the country, plenty of people do.

There is no good answer here; heck, there isn't any answer. But there is a peek into what has deepened our divide.

And there is also a reminder that all societies need local journalists. They are the ones who keep power in check.