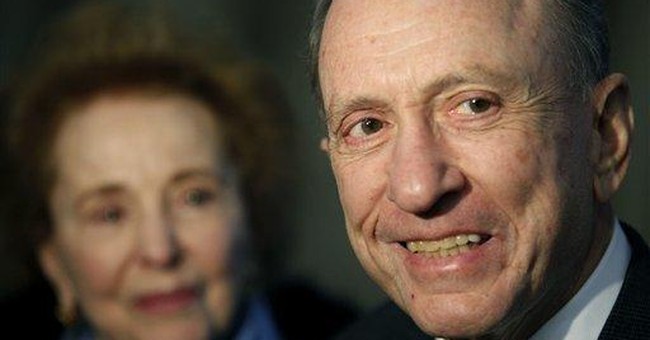 WASHINGTON – It is probably fair to say that U.S. Senator Arlen Specter, D-Pa., started it all. He perceived, long before anyone else, that this will not be the year of the incumbent.

Armed with campaign battle scars, a cantankerous personality and fairly long-in-the-tooth seniority (even by Senate standards), Specter has come to symbolize the end of the incumbent.

A CNN poll last week showed that only one-third of U.S. voters (a record-low number) think their members of Congress deserve to go back next year.

When Specter switched parties last spring, he was brutally honest why: He didn't want to go down in a closed Republican primary. When colleague Evan Bayh, D-Ind., announced last week that he will not run again, he was equally brutal: He’s sick of Washington and Congress.

After a summer of discontent marked by Tea Parties, angry town-hall meetings and plummeting polls, a domino-line of incumbent retirements has hit both chambers and parties.

Democrats have absorbed the heaviest blows. Bayh’s decision followed similar retirement announcements of Sen. Byron Dorgan, D-N.D., and Sen. Chris Dodd, D-Conn. The decision by Beau Biden, Delaware’s attorney general and an Iraq War veteran, not to run for his vice-presidential father’s old U.S. Senate seat is considered by many to be equivalent to an incumbent loss.

Those are guys who got out while the getting was good. Some notables, such as Majority Leader Harry Reid, D-Nev., who trails in the polls, and Sen. Blanche Lincoln, D-Ark., have not retired but perhaps should.

The saucer that cools public passions, as the Senate is often described, has grown bitterly cold for many of its incumbents.

Of course, party activists are furious with Bayh or Connecticut’s “Independent Democrat,” Joe Lieberman, and they are increasingly dismayed with Obama for not fighting the good fight, in their eyes.

“Lieberman is a matter of convenience,” said Purdue University political scientist Bert Rockman. “Most Democrats don’t like him at all, and his whole strategy is to win Republican and independent votes in 2012.”

Many of the Dem activists, Rockman explained, see their Senate leadership and their president as a bunch of wusses – but they don’t carry the same weight within their party as their Republican counterparts do on the opposing side.

Arlen Specter didn’t get along with his Senate colleagues when he was a Republican, and he probably won’t do any better as a Democrat. He isn’t the future of the Democratic Party – but his May primary opponent, the relentless U.S. Rep. Joe Sestak, is.

Sestak is positioning himself effectively to the left of Specter (although once Specter realized he was in for a more vigorous primary race than originally expected, he moved steadily leftward – just as Sen. John McCain, R-Ariz., has moved rightward in his primary battle against former congressman J.D. Hayworth).

American politics has become dysfunctional: The parties have moved much farther to the right or to the left than the average voter wants or expects. Ironically, elections that “throw the bums out” indiscriminately tend to throw out moderates because they are most vulnerable, inasmuch as they tend to come from marginal districts.

“So the irony is that an anti-incumbent election is apt to radicalize the parties even more,” Rockman explains. “That will take us farther from solving problems (rather) than closer.”

Specter demonstrated the ultimate in opportunism with his party switch. Opportunism is always a gamble, and it now looks as if he's rolled craps. Or, to use a poker analogy, his anticipated ace in the hole, President Obama (who pledged his support to the senator's re-election), has turned out to be a Joker card instead.

Voters in general will always be suspicious of a party-switcher. That suspicion, while not inescapable, can fade if the switcher persuasively makes a case that he or she did so out of conviction, not just to hang onto public office.

People just don't warm to people who look as if they are taking advantage.

Right now, they also are cooling to incumbents who, right or wrong, have become symbols of this year of widespread voter discontent.