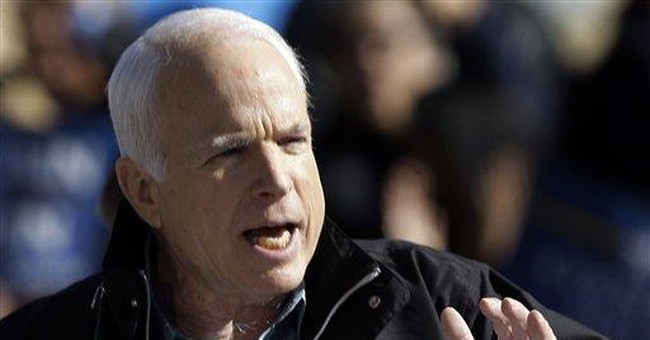 Those three words should send shudders down the spine of any hardworking, over-taxed, get-government-out-of-my-pocketbook American.

Yet the image and rhetoric of Barack Obama has buried his progressive government-knows-best philosophy.

Obama’s eloquence and his propensity to rarely make a mistake have made him the candidate that more Americans trust with the economy, according to many opinion polls.

Allan Meltzer, an economist at Carnegie Mellon University, says that when it comes to the economy, the other guy is better for the country.

On taxes, he says, McCain’s plan to reduce corporate tax rates is a much-needed reform. “That's much better than pumping up spending for a few quarters by giving away $1,000 per taxpayer,” he explains.

McCain’s plans are responsible populism, a good fit across party lines, especially during unsettling economic times. Too bad no one is picking up what he is putting down.

This country is generally an optimistic nation. People want to move up the economic ladder. That’s been an American credo since our creation, and anything that sounds as if it will stifle America’s entrepreneurial spirit runs contrary to who we are.

So it stands to reason that it is truly extraordinary that voters would consider Obama and a Democrat-controlled Congress as the best team to fix today’s economic crisis -- because, the fact is, they created it.

Columnist Orson Scott Card, himself a Democrat, put it in perspective last week when he wrote that the financial crisis was completely preventable. Card pointed out that congressional Democrats blocked any attempt to prevent it; when House Speaker Nancy Pelosi accused the Bush administration and congressional Republicans of enacting financial deregulation that caused the crisis, no one in the media called her on that lie, Card complained.

Absent in the daily-news narrative is that, as a senator, McCain tried to avert this mess and to get others in Congress to regulate lending responsibly.

Once again, the McCain message is buried, either by the daily political sideshows or by the brilliant way Obama’s campaign has “flooded the zone” with its message: A vote for McCain is a vote for four more years of failed Bush policies.

Some of the blame goes to McCain, too; he has been ineffective on the national stage at explaining his plan.

In a phone interview last week with the Trib's David M. Brown, McCain was asked to explain some of the fundamentals of what he would do to fix this mess. He emphasized job creation, making sure that people do not lose their homes so that their neighborhoods’ values continue to grow, and investing in our own natural resources, especially coal.

He proposed doubling the federal tax exemption of every child and family. He said his fundamentals also include keeping taxes low and stopping Washington’s spending spree.

All of it is a very appealing yet responsible populist message -- the polar opposite of Obama’s “spread the wealth” message.

McCain’s plans are about equal opportunity, not equal outcomes; he does not propose that politicians have some inherent right to confiscate our hard-earned incomes and to give those to others. Individual effort should be rewarded, not penalized.

That’s the essence of the “American dream” -- it’s why millions of people around the globe fight to become citizens of this country. Anyone who works hard enough can make it. We’re not a country bound by bloodlines or centuries of tradition; we’re a country that is bound by an ideal.

Yet the Obama-Biden way is all about equal distribution. That much was evident in one of Obama's presidential-debate responses: Asked why he supports increasing capital-gains taxes, when cutting them has been shown to increase revenue, he replied that it is a “fairness” question.

McCain has become “John the Populist.”

Too bad too few hear him.