Ryan Neuhaus
|
Posted: Sep 30, 2019 10:30 AM
Share   Tweet
The opinions expressed by columnists are their own and do not necessarily represent the views of Townhall.com. 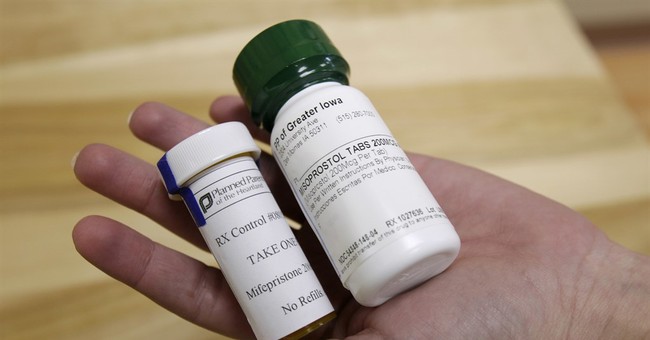 While a recent report from the Guttmacher Institute suggests that the national abortion rate is decreasing, it’s impossible to say. In the United States, the abortion data and reporting system relies completely on voluntary reporting. Currently, there are only two national organizations collecting abortion data in the United States: The Centers for Disease Control and Prevention, a federal government agency, and the private abortion advocacy group, the Alan Guttmacher Institute. Yet given the charged debate going on today over abortion policy the data matters.

Unlike many other countries, the United States does not have a federal law that requires the reporting of abortion numbers, complications, or even deaths. Some states, like California and New York don’t report data at all. What is known about abortion in the U.S. comes from the abortion industry that tells Americans to trust, but never verify.

Americans should be vigilant of deficient statistics and chemical abortions before “trusting and not verifying” the reports of the Guttmacher Institute.

Analyzing the report, the Guttmacher Institute does not hide from the fact that the data is incomplete, stating, “some individuals may self-manage their abortion outside of clinical settings. National estimates of the incidence of self-managed abortion are limited and cannot be developed using traditional surveillance at the facility level.”

The lack of desire to properly present quantitative data surrounding abortion is a concern. As shown in this Vanderbilt University Law School report there should be bipartisan support for federally regulated abortion data.

Inadequacies in data reported by the abortion industry is bad for society because inadequacy: Limits the ability of policymakers to swiftly address the issue; Puts women in harm’s way as information is lacking on the effects of surgical and chemical abortions; Makes it difficult for American courts to properly address legal bans on abortion; and Creates an ill-informed general public, which is detrimental to holding meaningful dialogue based on empirical evidence. In order to overcome these inadequacies and better protect women from harmful procedures, the abortion industry must have federally regulated data, just as any other medical procedure.

The growing black market for chemical abortions is moving brick-and-mortar abortions to the homes of American citizens. Chemical abortion pills are difficult to regulate as they are easily hidden and shipped internationally, which after being taken from the confines of one’s home can be easily portrayed as a spontaneous miscarriage.

This presents serious health concerns. A recent study published in the Journal of Obstetrics and Gynecology found that women who chemically abort have a four-fold higher risk for complications and problems.

The chemical abortion process is a two-step cocktail. Mifepristone, the first pill ingested, inhibits the production of progesterone and breaks down the lining of the uterus. The baby is then starved to death and dies in the mother’s womb. Sometime within the next 24-48 hours, the woman takes the second pill – Misoprostol – at home and alone, without doctor supervision; forcing the woman’s body into labor, causing severe cramping, contractions, and heavy bleeding. As Dr. Levatino describes, the woman is left to suffer alone and gives birth to a deceased child.

Chemical abortions are being pursued by the pro-abortion coalition as a safeguard to the aftermath of an ever-closer Post-Roe America. This is evidenced by pro-abortion organizations traveling across the country teaching women how to chemically abort and European doctors illegally prescribing women in the U.S. abortion pills. One of those doctors, Dr. Rebecca Gomperts, has illicitly prescribed the abortion pills to more than 7,000 U.S. women seeking to end first-trimester pregnancies.

Hoping to move away from surgical abortions in brick-and-mortar facilities, the pro-abortion coalition is seeking to move into American homes. In such a scenario, abortion data will never be federally mandated, as anyone who desires “to terminate a pregnancy would be able to legally access mifepristone and misoprostol without a requirement to see a health care provider or pharmacist first.”  Strategically seeking to bypass medical supervision, the pro-abortion coalition is hellbent on lifting the FDA-imposed Risk Evaluation and Mitigation Strategy (REMS) given to Mifopristone.