Ryan Bomberger
|
Posted: May 18, 2017 12:01 AM
Share   Tweet
The opinions expressed by columnists are their own and do not necessarily represent the views of Townhall.com. 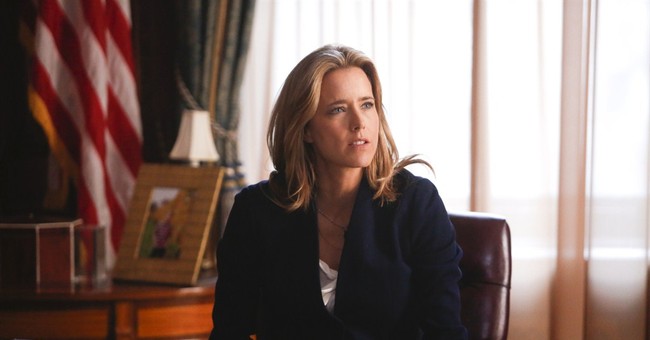 Hollywood doesn’t hide its religion of liberalism. Compelling dramas are often marred by overt attempts to preach politics instead of delivering meaningful storylines that resonate.

But once in a while, something wonderful breaks through—humanity. My wife and I really enjoy the CBS drama, Madam Secretary. We’ve grown to love the characters, their struggles and triumphs, their weaknesses and strengths. The faithful and loving marriage between the two main characters—Elizabeth McCord and Henry McCord—is such a rarity to see on TV these days. Yes, the show has its moments of laughable Leftism (please stop all the climate change hype) and what has now become obligatory LGBTQ and “moderate Muslim” affirmation. But in its most recent episode, entitled “Revelation”, it beautifully exuded a pro-life worldview.

In the show, it’s just discovered that State Department Press Coordinator—Daisy Grant—is 3 months pregnant. She’s unmarried and is dreading how to handle a pregnancy that resulted from her involvement with an undercover CIA operative who was killed 1 week into their relationship. She’s talking to her boss, Elizabeth McCord, the Secretary of State (mother of 3) who immediately recognizes that Daisy is pregnant.

Daisy Grant: “I guess I always thought that I would have to do it alone, but not alone alone.”

Elizabeth McCord: “Yeah. You know maybe every mother feels that way no matter who’s in their life, and at the end of the day it’s just you and the baby. And it’s my job to protect him or her.”

Elizabeth McCord: “Oh, you are. You are one of the strongest women I’ve ever met…even if you don’t feel like it right now ‘cause you’re drowning in a sea of hormones.”

Elizabeth McCord: “Ohhhh, yes I do. You don’t have to go at it alone. Your parents might be shocked, but you are literally the light of their lives, and they’ll get over it. And Joe’s parents raised a hero, so really how bad can they be? You’ve got all of us here. God help you.”

Elizabeth McCord: “It’s a beautiful world. And the best ride is just about to start.”

I know Planned Parenthood was fuming that the show’s Secretary of State (who some initially feared Hollywood was fashioning after Hillary Clinton…and let me tell you, she is nothing like Clinton) didn’t suggest that Daisy kill her unborn child. I mean, you can’t have a child get in the way of your career. And women aren’t strong enough to face difficult circumstances (according to the abortion industry), so of course abortion! Nope. Wasn’t even mentioned. Perhaps because the writers felt that mothers deserve better than the violence of abortion? It was an overt elevation of motherhood.

Planned Parenthood doesn’t elevate. They eliminate (over 320,000 humans every year).

But the show’s pro-life awesomeness didn’t end there. In another scene, the Secretary of State’s speech writer, Matt Mahoney, is suffering writer’s block and is trying to sort through it in his former girlfriend’s office, Daisy Grant. He feels like he can’t write an urgent speech that is needed to help free a journalist held in captivity in Sudan. He’s frustrated and discouraged because he feels like he can’t identify with such sacrifice.

Matt: “Meanwhile, what have I done with my life? Hey, are you ok?”

Matt: “Whoa. Who’s the dad? I wish it were me. Not because I wish we were still together, but because then I’d start every day with a worthy purpose, you know? I got to go out there and get things done. Daisy and I have a baby.”

Matt: “Daisy. Can I just say one thing? Whoever he is, he’s a lucky guy. But even more importantly, that baby is a lucky guy. I feel like he’s a guy, by the way. ‘Cause he is going to have the best mom in the whole world.”

Daisy: “Thanks, Matt. Now go get inspired, because people are counting on you.”

Purpose is something that I celebrate every day. I almost wasn’t. I’m the one percent that is used to justify 100 percent of abortions. My birthmom was stronger than her circumstances. She gave me the gift of life and adoption. My parents self-sacrificed more than I even know to love and care for their thirteen children (ten adopted), unleashing our God-given purpose. As a husband, homeschooling father of four, factivist, citizen journalist, speaker, and creative professional who starts every day with a worthy purpose, I know exactly what the fictional Matt wants. Loving and committed fatherhood is life-changing.

My wife chose to be stronger than her circumstances, too. She was a single mom of a beautiful little girl for two years (nearly three since we include her motherhood during pregnancy). The biological “father” was MIA, and she was incredibly pressured—but never considered—abortion. She never thought she would have to do it alone, but refused to give up. And she never needed abortion to continue her teaching career. An unplanned pregnancy wasn’t the end of her life but the beginning of a much stronger, more outwardly-focused Bethany. That little girl—my oldest adopted daughter, Hailee Radiance—is the reason for the name of the nonprofit organization that Bethany and I created to illuminate that every human life has purpose—The Radiance Foundation.

In this day and age of such obscene narcissism, it’s so refreshing to witness pro-life, pro-motherhood, pro-fatherhood sentiments expressed in a medium dominated by seemingly hopeless liberalism and hostile faux feminism. Hollywood isn’t completely lost. Once in a while, it finds its way and illuminate truths it once considered the norm.