On Those Oil Profits 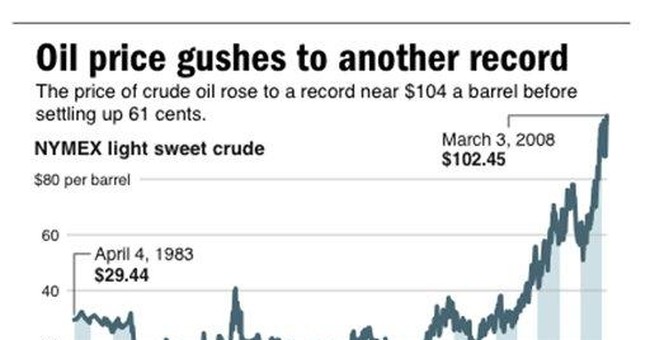 When it comes to public hatred of big business, there’s no better target than oil companies. This hatred has been all the more intense since Exxon Mobil announced last year’s net income at $40.6 billion, the largest-ever profit for a publicly-traded company. With the threat of recession looming, many policymakers have been tempted to pay for relief measures by raising taxes on “Big Oil”—including the House’s recent bill rolling back tax deductions on integrated oil companies (though leaving them in place for other companies). Understandable as this impulse may be, it is a bad idea for average Americans. If the government tries to “do something” about record oil profits, it won’t provide meaningful relief revenue, but will certainly raise the price at the pump.

Part of the reason for giant oil profits is that the industry itself is huge. But viewed in relative terms, oil and gas earnings are less impressive. The industry’s net profit per dollar of revenue was just under 9 cents, compared to 13 cents for the S&P 500, meaning the “markup” for the oil and gas industry is below average .

Granted, total profits reported by these companies will be large, because the industry volume is enormous. But why did the integrated oil majors do so well in 2007? The answer is record oil prices, which are set by supply and demand on the world market. The average price of crude was $72.30 per barrel in 2007, compared to a historical average of $25.95 during the period 1986 – 2006. This explains why not only Exxon Mobil, but most of its competitors, had strong years: Royal Dutch Shell earned $31.3 billion, Chevron earned $18.7 billion, and ConocoPhillips came in with a respectable $11.9 billion annual profit.

So now we’ve pushed back the problem one step, and we have to ask, Why were oil prices so high last year? Perhaps the greedy oil companies colluded to restrict supply, and stick it to the helpless consumers!

The problem with this theory is that the supply of oil is also at an all-time high. The worldwide average number of barrels produced per day was an estimated 84.8 million in 2007, compared to 72.4 million during the period 1986 – 2006. The oil industry responds to high prices just as any other industry does. When the price of a product goes up, companies have the incentive to sell more of it.

High oil prices in recent years are caused not by supply restrictions, but by huge increases in demand. As the economies of places such as China and India boom, they draw oil and other commodities to them. Higher market prices signal the increased scarcity of these resources, causing businesses and consumers around the world to economize more carefully in their usage, whether that means finding alternate production techniques or carpooling to work. At the same time, the high prices give incentives to locate and develop more oil reserves. Given the economic realities, these outcomes are exactly what we want to happen.

Whether or not one views these market forces as benign, jacking up taxes on oil companies will only make things worse. When you raise taxes on an activity, people engage in less of it; that’s the whole point of sin taxes on liquor and cigarettes. But in this case, we’re taxing the companies who produce oil – meaning less production and higher consumer prices.

Raising taxes on the production of oil will reduce its supply, causing oil and gasoline prices to rise even further. They sometimes call it a “windfall” tax, but in truth crude oil doesn’t grow on trees. It can take over a decade and hundreds of millions of dollars of investment to find and prepare an oil field for large-scale production.

Oil companies are already paying exorbitant tax bills. In 2006, the industry paid $81 billion in income taxes, and almost certainly paid more in 2007 as profits were higher. (The industry data for 2007 have not yet been compiled.) Also remember that government forecasts of new tax revenues are usually grossly optimistic, because they ignore the reaction of the target industry. President Reagan ended a Carter-era windfall tax on oil companies that had generated only $80 billion during its lifetime, even though proponents of the tax had anticipated a take of $390 billion.

If politicians are concerned about gas prices, they shouldn’t erect extra hurdles for those companies in the business of finding new supplies of oil. If the government really wants to do something, it can roll back restrictions on offshore and Alaskan drilling. Beyond that, it should just let market prices and the profit motive do their jobs.

A note of disclosure for Townhall’s readers: I have publicly defended oil profits, and opposed new taxes, for years, even back when I was a humble college professor. I want to admit upfront, however, that recently some of my consulting fees have come from nonprofits who are partially funded by energy companies.