When a Progressive Culture Goes off the Rails

Robert Knight
|
Posted: Apr 12, 2016 12:01 AM
Share   Tweet
The opinions expressed by columnists are their own and do not necessarily represent the views of Townhall.com. 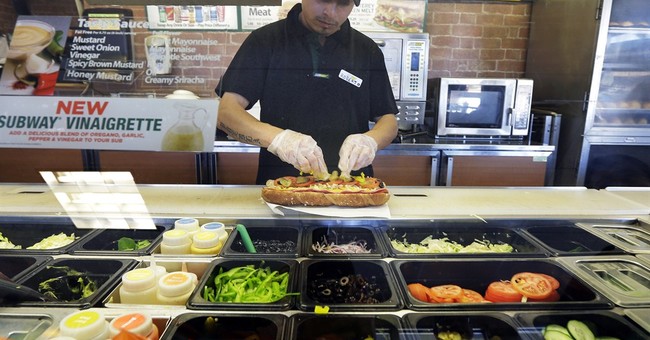 With spring in the air, it’s time to take a fresh look at the insanity around us. If the birds and the bees were acting as crazy as humans, they’d be flying in circles and crashing into trees.

The lunacy is coming in big batches, such as the bizarre presidential race, the collapse of civility and the daily outrages from Team Obama. And it’s hitting us in small ways, such as court outcomes that defy common sense.

Let’s start with the small stuff. Settling a class action lawsuit in federal court in Wisconsin, the Subway sandwich chain has to pony up $525,000 to lawyers, plus $500 each for 10 plaintiffs who have been damaged because – get this – Subway’s “Footlong” sandwiches were found to be sometimes one half to one inch shorter than 12 inches. Talk about a “First World Problem.”

Perhaps Subway should have agreed to provide each plaintiff with a year’s worth of Footlongs. They could cut them into one-inch portions and stuff their cheeks with them like chipmunks to compensate for all the lost nutrition. Now imagine what the lawyers could do to sandwich shops that feature “mile high sandwiches.”

Also in Wisconsin, a man won the right in February, on religious grounds, to be photographed for his driver’s license wearing a colander on his head. He claims to be a “Pastafarian,” a member of the fanciful “Church of the Flying Spaghetti Monster.” As if he needed more holes in his noggin.

In Massachusetts, the state Registry of Motor Vehicles first denied a woman's similar request last November, but caved after a threat from the American Humanist Association. In wacky, progressive America, fake religion counts more than the real thing.

Now for some bigger and profoundly serious stuff. Several states are under siege from multinational corporations that have threatened to pull their business, just as corporations successfully bullied Indiana over a religious liberty law last year.

In Georgia, Gov. Nathan Deal, who won office as a conservative Republican, gave his Christian constituents a nasty surprise by vetoing a bill that would have protected people of faith from having to participate in same-sex weddings or other expressive activities. Let me summarize in progressive-ese: “You vill perform zee vedding or else.”

The governor’s betrayal came after major companies such as Disney, which films in the Peach State, threatened to move its operations. We pause here to mention Jesus’ warning about the danger of gaining the whole world but losing your soul.

In Virginia, Democrat Gov. Terry McAuliffe vetoed a bill that bars the state from punishing religious groups that refuse to accommodate same-sex ceremonies. It seems like only yesterday that the progressives promised never to go after churches or to force pastors to do something against their beliefs.

Mr. McAuliffe also vetoed a bill that would have allowed parents to opt their kids out from reading books with sexually explicit passages. We pause to mention Jesus’ warning that anyone who corrupts children would be better off tossed into the sea with a millstone around his neck.

In Mississippi, Republican Gov. Phil Bryant is under vicious attack for signing a religious freedom bill that protects faith-based organizations and a few small businesses from being forced by government to facilitate activities that violate their beliefs.

Wackiest of all is the hysteria over North Carolina Republican Gov. Pat McCrory’s signing of a bill that essentially says men and boys should stay out of women’s restrooms and locker rooms. The law overrode a Charlotte statute allowing entry based on self-identity, not biological sex.

The ACLU sued, and the usual corporate lynch mob gathered, led by Apple, PayPal and Bank of America. The National Basketball Association threatened to pull its 2017 All-Star game in Charlotte, so deeply does the NBA believe that men and women are interchangeable in every way imaginable. Really? Then why aren’t there any females making dunk shots for the Hornets? Just asking.

This crazy stuff is coming so thick and fast it makes your head spin. Speaking of that, exorcisms are becoming more common, according to recent reports.

Can you imagine going back in time and asking the men preparing to land on the killing beaches of Normandy if they were fighting so that in the near future, confused men in dresses could be free to invade the ladies’ room? This would have made a great script for Tokyo Rose, whose broadcasts were aimed at sapping the morale of U.S. servicemen in the Pacific during World War II.

Except that nobody would have believed it.

To wrap up the lunacy, there’s a poor, deluded transwoman in Arizona making news by declaring that he/she now is really a dragon, and has had skull surgery and tattoos to fit the new identity.

Coming soon: An ACLU lawsuit demanding that dragons get their own bathrooms.