Robert Knight
|
Posted: Mar 16, 2016 12:01 AM
Share   Tweet
The opinions expressed by columnists are their own and do not necessarily represent the views of Townhall.com. 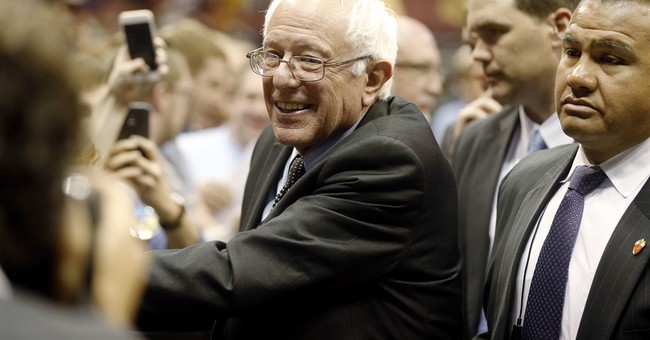 Ever wonder how Bernie Sanders’ brand of “democratic socialism” differs from socialism in general, which has wreaked havoc all over the world?

The short answer is: only by degree.  Progressives of all stripes work to establish “equality” by empowering governments. The difference is their place on the axis of forced egalitarianism.

Like other democratic socialists, the Vermont Democrat rejects communism, National Socialism (Nazis), fascism and other variants as anti-democratic.  The democratic socialists insist that they can preserve human liberties while forcing everyone into communal economic arrangements.  The key is to have “the people” collectively make all important economic decisions.

I ask: Have you ever been on a small committee? Can you imagine trying to get collective agreement on literally millions of economic decisions made by people every day? This is why top-down systems don’t work.

Informed by their Christian faith, America’s founders were under no delusions about people’s propensity for misbehavior. So they labored to create a government that held human life in the highest regard (eliminating slavery came later) while denying too much power to any one person or group.

Whatever its trappings, socialism’s underlying philosophy is dangerously wrong.  Its mainspring is envy, coupled with a profound misunderstanding of human nature as perfectible; we just need the right system.

Sen. Sanders, like Donald Trump and Ted Cruz, has tapped into very real distress all over America over the hollowing out of our manufacturing sector and the growing gap between rich and poor.  The middle class is withering and entire towns are disappearing, with jobs going to Mexico, China and other countries where multinational corporations find cheap labor.

The problem is that Mr. Sanders’ democratic socialism, with open borders and open welfare, is aimed at expanding the Free Stuff Army, which empowers government. Any such arrangement must eventually resort to force against independent-minded dissenters.

In Venezuela, a relatively well off, oil-fueled democracy where voters installed the democratic socialist administration of Hugo Chavez in 1999, there are now toilet paper shortages, rampant inflation, social unrest and other telltale signs of economic calamity.  In the name of equality, bureaucrats looted the nation’s wealth and confiscated whole industries. The press has been effectively muzzled.

In so-called democratic socialist European countries, religious liberty is under assault, as it is in America’s more liberal enclaves.  In Oregon, a state with more than its share of democratic socialists, the Christian couple who declined to bake a cake for a same-sex ceremony have been ordered by the Bureau of Labor and Industry commissioner to “rehabilitate” themselves by abandoning their biblical beliefs and obeying a gag order against discussing their beliefs in public.  I’ve yet to hear any democratic socialists having a problem with this.

Under democratic socialism, we’re told, companies will be employee-owned, and profits will be either shared by the employees or distributed to ensure “social justice.”  Profit-sharing seems to be a good idea, but It’s never clear who gets to decide how to do it, or what happens when one employee works much harder or goofs off.   The Jamestown colonists found out that communal sharing of resources regardless of effort leads to indolence, resentment, conflict and shortages.

To see where democratic socialists want to take us, it’s instructive to peruse websites such as feelthebern.org.

There you’ll find an array of policy prescriptions that differ only slightly from those of President Obama’s de facto march toward socialism.

Mr. Sanders also supports forcing religious-based institutions like the Little Sisters of the Poor to provide contraceptives and abortifacients, and he’s for open discrimination against faith-based social service agencies.

There’s more, including a full embrace of the globalist climate change agenda. It all adds up to a worldview hostile to America’s traditions of private property rights, faith and personal responsibility.

A powerful primer on socialism popped up recently on Facebook. It’s a photo of Sen. Sanders sitting in a chair like Dos Equis beer’s ”most interesting man in the world.” In the Bernie version, he says, “I don’t always drink beer, but when I do – it’s somebody else’s.”  Another photo shows a Bernie campaign sign ripped in half, with a note attached, saying, “I took half of your sign because you had one and I didn’t. I’m sure you understand.”