Chicago’s ‘Godfather’ Is Under the Gun 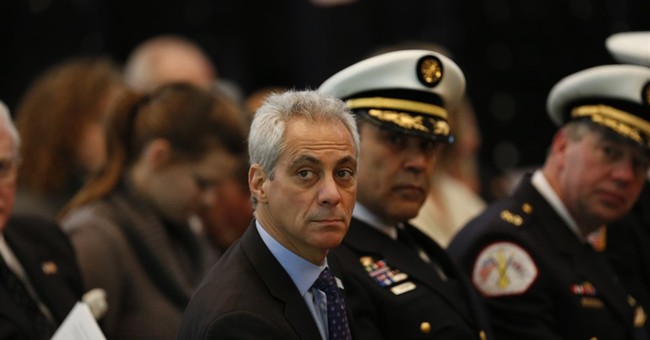 The Clintons and their cronies have an amazing track record for surviving scandal, but it’s being tested mightily in Chicago.

Mayor Rahm Emanuel, a longtime Clinton ally, is facing an insurrection over his handling of a white police officer’s shooting of a 17-year-old black youth on October 20, 2014.

Coalition for a New Chicago, a liberal pressure group, is calling for his resignation. The U.S. Justice Department announced a civil rights investigation on Dec. 8, and Democratic Rep. La Shawn Ford has filed a bill in the Illinois legislature that would allow a mayoral recall election.

Clearly, the mayor’s dismissal of Police Superintendent Garry McCarthy on Dec. 1 did not quell the outrage.

Laquan McDonald was fatally shot with 16 bullets recorded on a police dashcam video that city officials kept under wraps for more than a year before a judge ordered its release last month. Anyone tempted to dismiss the ongoing protests as “Black Lives Matter” agitprop should take a few minutes to watch it on YouTube.

Police had arrived in response to a report that a man was breaking into vehicles and had a knife. At some point, Laquan used a knife to puncture a patrol car’s tire. As he walked away, another police car pulled up, and out jumped Officer Jason van Dyke, who six seconds later fired the first of two shots that took Laquan down. Then, as indicated by puffs of smoke in the cold air, he fired 14 more shots into Laquan as he lay in the street. PCP, a drug that causes erratic behavior, was detected in Laquan’s bloodstream.

On Nov. 24, 13 months after the shooting, prosecutors, who had received the video within a day, charged Officer van Dyke, who had been on paid desk duty, with first-degree murder. Six official murder counts were filed last Wednesday.

Facing a sea of outrage, Mayor Emanuel canceled plans to attend the climate change summit in Paris and instead spent time in the South Side of Chicago, trying to calm the storm, which has even had an economic impact. Fearful that protests would turn violent, Christmas shoppers have been avoiding the downtown, reportedly costing Magnificent Mile merchants 50 percent of expected receipts.

At a ceremony last week in which he gave a speech on behalf of My Brother’s Keeper, a program endorsed by President Obama that aims to keep young black men out of trouble, Mr. Emanuel was treated to protesters’ chants of “16 shots!”

Some critics contend the video was suppressed until after Mr. Emanuel was safely re-elected in an April run-off. Whatever, the fact that it took a year for the video to surface and for charges to be filed speaks volumes about what happens in a city controlled by a single party.

Chicago, which birthed Obama’s community organizing and his political career, has had one-party Democratic rule for decades, along with a richly deserved reputation for graft and a corrupt voting process.

Mr. Emanuel, 56, epitomizes Chicago machine politics, in which rules are broken and people threatened or pampered.

In 1991, after years as a top Democratic fundraiser, he joined the presidential campaign of then-Arkansas Gov. Bill Clinton, helping him compile a massive war chest that helped Clinton overcome the Gennifer Flowers “bimbo eruption” scandal and cruise to the nomination.

At a dinner party in Little Rock for senior staff after the election, “as about a score of them sat around a picnic table mushily declaring their love for one another, Emanuel picked up a knife and called out the names of different politicians who had *expletive deleted * us.’ After each name, Emanuel would cry out, ‘Dead man!’—and stab the knife into the table,” according to Chicago Tribune reporter Naftali Bendavid. The “victims” included Democrats who had committed the cardinal sin of supporting other candidates in the primaries. In another well documented incident, “Rahmbo” as he was known before his current moniker of “the Godfather,” sent a dead fish in a box to a pollster who was late delivering results.

Although the media dubbed him a “centrist,” his voting record as an Illinois congressman from 2003 to 2008 was clearly on the far left. The American Conservative Union gave him an overall 13 out of 100 and an outright 0 rating in 2007, while the liberal Americans for Democratic Action gave him a 96 percent overall rating.

The National Abortion Rights Action League (NARAL) and the Human Rights Campaign each gave Emanuel a 100 percent rating, while the National Right to Life Committee gave him a zero.

From January 2009 to October 2010, as Barack Obama’s chief of staff, Emanuel operated according to his own famous admonition that, “You don’t ever want a crisis to go to waste. It’s an opportunity to do things that you would otherwise avoid.”

Ever wonder why we lurch from one “crisis” to another during Obama’s presidency? If there isn’t one happening, they create it. America’s “health care crisis” helped force Obamacare down America’s throat. Terrorist incidents have been turned into a “gun crisis.” At the border, where thousands of “unaccompanied minors” are again pouring into the country, the crisis is a direct response to the administration’s dangling the magnet of amnesty.

As the author of various crises, Mr. Emanuel is up to his ears in one that may be his undoing. Or maybe he’ll magically use it to his advantage. He’s good at this sort of thing.