Deflating America’s Character, One Scandal at a Time 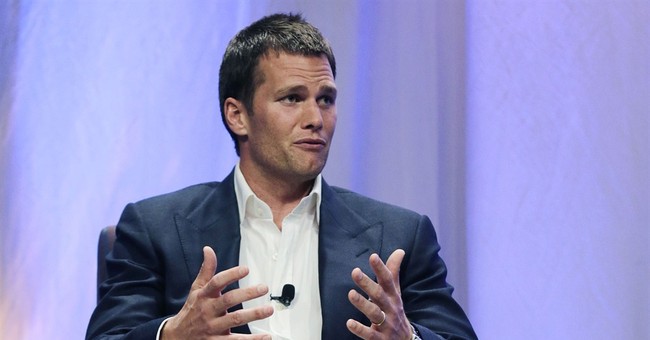 Unlike the 2014 Little League World Series champs, who lost their trophy because they fielded ineligible players, the New England Patriots are not going to lose their Super Bowl rings over Deflategate.

But it will be instructive to see the public reaction over the National Football League’s announced four-game suspension on Monday of Patriot quarterback Tom Brady over the deflating of footballs at the AFC championship game. Amid growing evidence, he couldn’t plausibly scramble his way out of his previous contention that he knew nothing about the incident in the Patriots’ 45-7 victory over the Indianapolis Colts in the AFC Championship Game. The Pats went on to defeat the Seattle Seahawks 28-24 in Super Bowl XLIX.

For non-football fans: deflating the ball makes it easier to throw, and each team provides its own footballs for its offense. An NFL investigation found that Patriot locker room personnel almost certainly deflated 11 of 12 footballs after referees had tested them, and that Brady “was at least generally aware of the inappropriate activities.”

Since the balls were all precisely deflated to the same illegal level, the odds against that happening spontaneously are astronomical. Nonetheless, Brady professed astonishment after the Colts cried foul. Evidence has since emerged that Mr. Brady lavishly rewarded the equipment managers, and that the managers had texted each other about the scheme.

The NFL is also fining the team $1 million and the Patriots will forfeit a 2016 first-rounder and 2017 fourth-round selection in the NFL Draft. Ouch.

If nothing really painful had happened to Mr. Brady or the Patriots, it would have been one more high-profile example of people in public life getting away with dishonesty, which is culturally corrosive.

Cynicism – and misconduct – grows when certain people seem to be beyond accountability.

The cultural damage was enormous when Bill Clinton not only was caught in lies about his affair with Monica Lewinsky, but that he got away with it and has prospered mightily since leaving office. Think of the messages sent to America’s children: Character doesn’t count, marital vows are a joke, and changing the definitions of words like “is” are just something you do to get people off your back.

On April 14, we learned that the Internal Revenue Service, whose wrath knows no bounds for “everyday American” taxpayers who make mistakes on their forms, has retained thousands of IRS employees who cheated on their own taxes, and even gave some of them promotions and raises. Above the law? It certainly seems to be the case.

The Treasury Inspector General for Tax Administration’s report notes that, according to federal code, “The IRS shall terminate employment of any IRS employee if there is a final determination that the employee committed certain acts of misconduct, including willful violations of tax law, unless such penalty is mitigated by the IRS Commissioner.”

It turns out that for over a decade, more than 13,000 IRS employees got caught violating the tax code, and 1,580 were deemed intentional cheaters. Of those, 61 percent kept their jobs.

This is the same IRS whose officials flatly denied that orders had come down from the top in Washington to target Tea Party groups before the 2012 election and deny them non-profit status. It was just some rogue officials in Cincinnati, we were told.

The head of the nonprofit division, Lois Lerner, not only refused to testify under oath to Congress about the IRS’s jihad against conservatives but somehow managed to “lose” thousands of pertinent e-mails. Hillary Clinton one-upped her, not only ditching thousands of e-mails from her stint as Secretary of State but also wiping her personal server clean.

And while we’re on the subject of cover up, nothing yet has happened to those who got caught brazenly lying about what triggered the terrorist attack on the U.S. consulate in Benghazi, Libya on Sept. 11, 2012.

For two weeks, Obama Administration officials, most notably then-United Nations Ambassador Susan E. Rice, President Obama himself, and Mrs. Clinton, insisted that an obscure anti-Islamic video triggered a spontaneous riot. Thanks to State Department e-mails obtained through Freedom of Information Act requests by Judicial Watch, it has become clear that officials in Washington knew about the nature of the attack in real time.

It had nothing to do with a video. Is anybody ever going to face any repercussions about the lies surrounding the deaths of Ambassador J. Christopher Stevens and three other Americans?

Compared to these scandals, Deflategate is small potatoes despite the outsized media attention it’s getting because of America’s obsession with sports and celebrities.

But it is a big deal in terms of its impact on a culture that seems increasingly indifferent to truth while rewarding success at any cost.

Proverbs 20:10 is a warning that seems particularly applicable to Deflategate: “Diverse weights, and diverse measures, both of them are alike an abomination to the LORD.”

Tom Brady and the Patriots are also paying a high price, when you look at what the sanctions say about their character. As Proverb 22:1 states:

“A good name is more desirable than great riches; to be esteemed is better than silver or gold.”