Cultural Rot and Its Political Fallout 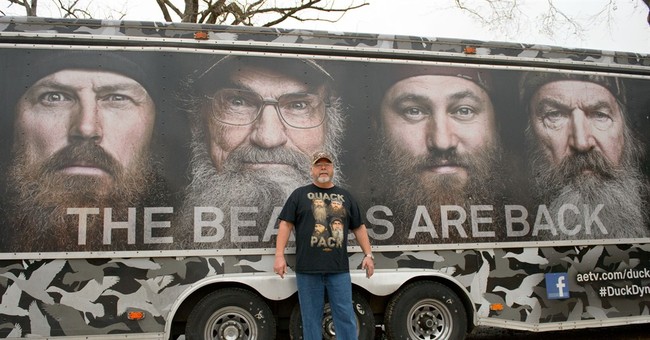 The trouble with progressives is not just that they eventually run out of other people’s money, as Margaret Thatcher observed. It’s that they find new ways every day to project their own dysfunctional worldview on the rest of us.

It’s like living next door to a nuclear waste dump run by the Bumpusses. You’d like to ignore it, but shards of spent fuel keep falling into your yard and setting your dog on fire.

This is how non-progressive Americans increasingly view our ever-coarsening, progressive popular culture and the ruling elites who promote it. They’re aghast at not only the moral meltdown but the rise of dictatorial executive power in Washington, as explained to us by the president in his State of the Union address, in which he reduced Congress to a helpmate at best.

As for whether the culture is rotten, ask any anxious parent whose child is out of sight for more than five minutes. Ask middle-class wage earners working on their tax return, trying to please an increasingly ruthless IRS. It’s all connected. As the moral, marriage-based culture collapses, the government grows bigger to pick up the pieces. In such a culture, it’s easy for the president and his media allies to stoke the fires of envy and spread more dependency. It works even better when the people are stoned.

Having softened us up with cultural rot, the Left is driving for total political control, with little effective opposition. Failing to hold the administration accountable for a multitude of scandals, the Republican leadership is now trying to figure out how to raise the national debt and to turn 11 million undocumented Democrats into voters.

To suggest we can just tune out the cultural, political and social mayhem and go about our business is a non-starter. There is no escape. Even if you turn off the news, it seeps in everywhere.

Culturally speaking, there is no traditional moral standard that does not evoke a savage response from the dominant culture. Ask “Duck Dynasty’s” Phil Robertson.

Likewise, there is no earned money that is not considered fair game for confiscation in the name of progress and “equality.” If you complain, you’re at best a racist, and at worst a Tea Party terrorist for whom the IRS is sharpening its knife.

The worst sin of all in the age of iron-fisted, progressive “tolerance” is to react to moral degradation by failing to facilitate it. If you get caught in a non-festive mood, like the Christian bakery owners and wedding photographers who think the First Amendment protects their right not to be forced to celebrate sin, you are in legal jeopardy.

Coming to your state, unless you live in Jerry Brown’s California or Chris Christie’s New Jersey, which already have this abomination, is a law that says right is wrong and that wrong is mandatory. California’s statute, which the Ninth U.S. Circuit Court of Appeals upheld last week, denies the right of parents to take children to licensed therapists to deal with unwanted same-sex desires. Parents are allowed only to enlist therapists who counsel children to be “gay.” This is America, land of the free?

Isn’t it the progressives who keep telling us to stop imposing our morality on them?

America is not only morally confused but obsessed with bad behavior. In December, the Wall Street Journal devoted a weekend Review section’s front page to an article by Lee Seigel entitled “America the Vulgar.” After assuring us that he was no prude (his favorite movie is “Last Tango in Paris”), Mr. Siegel does a good job conveying the gnawing fears of many Americans that Miley Cyrus and her obscene “twerking” is the new normal.

“When did the culture become so coarse?” he asks like Rip van Winkle waking up to a particularly awful hangover. Insisting that he is “no angry culture warrior” he nonetheless muses for “a time when there were powerful imprecations instead of mere obscenity – or at least when sexual innuendo, because it was innuendo, served as a delicious release of tension between our private and public lives.”

Well, okay, but the real problem is not lack of sophistication but the numbing of conscience. And beneath that is contempt for God, the Author of morality.

The Apostle Paul nailed it nearly 2,000 years ago in the first chapter of his letter to the Romans:

“For since the creation of the world His invisible attributes are clearly seen, being understood by the things that are made, even His eternal power and Godhead, so that they are without excuse, 21 because, although they knew God, they did not glorify Him as God, nor were thankful, but became futile in their thoughts, and their foolish hearts were darkened. 22 Professing to be wise, they became fools….”

America’s moral confusion and obsession with materialism was once diagnosed by Soviet dissident Nobel Laureate Aleksandr Solzhenitsyn in a June 8, 1978 Harvard speech for which he was roundly denounced by America’s intelligentsia, led by the New York Times.

Thirty-six years later, another Russian, a former KGB leader whom Solzhenitsyn would regard as a strange bedfellow, recently made similar observations:

“Many Euro-Atlantic countries have moved away from their roots, including Christian values… Policies are being pursued that place on the same level a multi-child family and a same-sex partnership, a faith in God and a belief in Satan.”

Vladimir Putin may be exploiting our moral decline for his own purposes, but to many weary Americans, his remarks ring true.

We are not yet the world’s Great Satan, as our militant Muslim enemies falsely describe us, but we might consider asking our ruling elites in Hollywood, New York and Washington to give the mullahs less evidence for that claim.

Meanwhile, those with faith in God and a love for a free America need to hold tight, pray for revival and become more actively involved in what needs to be a mighty tide of resistance.