Leadership Is More Than Puffery

Robert Charles
|
Posted: Feb 25, 2016 1:24 PM
Share   Tweet
The opinions expressed by columnists are their own and do not necessarily represent the views of Townhall.com. 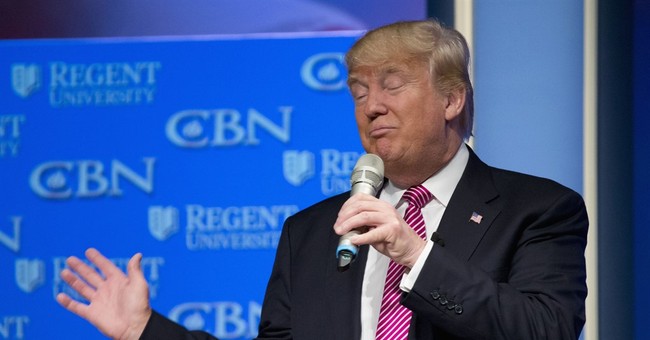 Are the wheels about to come off Trump? Forget the late push to reshape Marco Rubio, with cheery endorsements from the losing Republican presidential candidates – namely, Romney, McCain, and Dole. Good men, nice words, wrong moment. Put aside the capable former Supreme Court litigator, who polls say can beat Hillary Clinton, Ted Cruz. What is happening to the Trump story?

Stories are appearing with facts hard to ignore, even for Trump supporters. Something in his story is beginning to not ring true.

Trump offers three things that appeal – bluntness, political incorrectness, and self-claimed business acumen. The blunt talk is cheap but exciting, like a bad wine drunk too fast. It leaves you thrilled for a bit, then battling a headache. Trump pitches insults, then doubles back to correct and retract them.

Think about it. It’s a pattern: Trump’s pro and con statements about Planned Parenthood and abortions, how he was going to sue Ted Cruz then ran from Cruz when challenged, how he loves Putin but hates him, thinks the Pope is disgraceful but then makes up, loves women but disparages them, promises veterans the world then gives little, claims to support those who sacrifice, but rips McCain’s POW years and rips former President GHW Bush, a bona fides World War II naval hero. Then there is his blunder on the Nation’s Nuclear Triad, while promising to wipe out terrorists. He is everywhere, and nowhere. Who is he, anyway?

Trump is right to protest politically correctness. He is right on the judgmental and one-sided media. He is right to decry the drag of bureaucracy on politics and markets. But what is he doing – isn’t he just reflecting popular sentiment back to us? Is he not “admiring the problem,” which we all do now and then? Then, just saying “Make America great again,” does not fix it. Trump is reading the back side of the liberal “bash America” coin. Yet he has also proven to be liberal. So words are cheap, again. What would he do? Where are his credentials? Who is he, really? No one really knows. Waving your hands, saying you will cast a spell, throw a fit, fire people, and make us “great again” is not a plan. In fact, it is beginning to look goofy.

The real question is – what has Trump done? What is behind the cheap words? Why vote for him instead of Cruz? The answer, for those who like him, has been assumed business acumen. But questions are now being raised. They are serious questions. We all need to listen.

The Economist has just come out with a lengthy article, taking apart the “Trump business story” – and it is not pretty, not very comforting. It is filled with a list of bad decisions, arrogant gambles that failed, including bankruptcy of huge projects, sudden recovery of some, and then a recent run of self-promotion on television, making himself into everyone’s favorite dish soap. And his original money came from his father’s buildings, not his. So, is he “self-made” as he says, and what exactly did he make?

On the management front, the Economist is even tougher – calling his management of New York properties “clannish,” not up to the norms of public companies, let alone an enterprise as large as a government. To this, they add an assessment of his real wealth – which is essentially a mystery, verified more by his proclamations than by public audits, transparency or reporting.

All this would be a sidelight, except that so much is riding on it. It is the guts of what recommends Trump – or what he recommends to us about himself – that, business acumen. But where is it? Beyond the puff, bluster, admiration of common frustrations, and satisfaction in rant, what commends Trump to any of us? Perhaps his self-declared deal-making ability?

That shoe dropped today. According to Bloomberg Politics, things are not as rosy as they seem. Trump’s international “deal making” ability – may be less than meets the eye. Today’s Bloomberg article reports: “In Panama, his condominium owners are trying to fire him,” and “in Canada and Turkey, his business partners want to cut him loose,” while “In Scotland and Ireland he claims to be making millions but so far is losing money.” The article goes into detail on a series of other questions, quirks, and seeming misfires.

Time for a deep breath. Is this guy who America wants in charge of FIXING problems? Or is he just a seat-of-the-pants promotor, a carnival barker for himself, a shoot-from-the-hipster with a record of misfires, which he does not want to talk about? Is he suited to be a president? We are all at a moment of hard choices. The next couple of weeks will tell us what we all think. Will we gamble our country and future on a candidate who sees problems but lacks the background to fix them, or choose more wisely? Will we pivot and pick someone who does more than complain, and is equipped to make things for the better?

Bottom line: We need is a serious problem-solver, not a problem-admirer. The Establishment thinks that candidate might be Marco Rubio or John Kasich. The rest of the country, those vocal but getting less keen on Trump, see another option: Ted Cruz. Americans mostly want to see government fixed at last, national security addressed at last, faith protected at last, foreign policy done right at last, jobs and growth brought back at last, and Supreme Court decisions that honor and respect the Nation’s history. As the wheels begin to shake around the Trump wagon, many are looking to Senator Ted Cruz.

Thus, no surprise that Texas Governor Greg Abbott, within the last 24 hours, endorsed Ted Cruz for President. In the end, smart people and compromises are what makes our democracy work. We should try to promote a fixer, not fix a promotor. Let Trump be Trump, but for the rest of us, we have a country to protect. We have a general election to think about, and we need to select a thoughtful, smart, seasoned leader, one who remembers that American leadership is more than puffery.