View From The Left 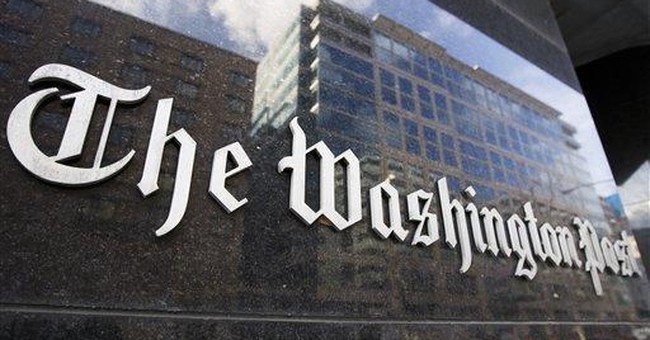 Journalists frequently claim they’re impartial arbiters. They purport to “speak truth to power,” “afflict the comfortable” and a whole series of similar tired clichés. But the reality is that what you see depends on where you stand. And in journalism, that’s all too often on the left.

Consider stories culled from just two day’s worth of The Washington Post.

“Poll finds gains for same-sex marriage,” announces the headline over the lead story in the Metro section on May 11. “Maryland residents are shifting toward a more positive opinion of same-sex marriage, with registered voters now narrowly supporting a law to allow it, a Washington Post poll has found,” the story begins.

But let’s dig deeper into the story and the poll results. “The poll, conducted May 3-6, finds that 46 percent overall favor legal same-sex marriage, 44 percent oppose it, and 10 percent have no opinion,” the story says. “Among registered voters, 48 percent are in favor and 43 percent are opposed.”

In other words, the poll doesn’t show majority approval for either position. A better headline would have been, “Voters remain closely divided on same-sex marriage,” since that’s what the poll actually showed.

But has support for same-sex marriage increased, as the newspaper headline claims? Maybe.

“In late 2007, an identical Post poll question found 44 percent in favor overall and 51 percent opposed,” the story notes. The full results of the polls, while not linked to in the May 11 story, are available online. Note that the “gains” for same-sex marriage are tiny: two percentage points. That’s within the poll’s margin of error, which is listed at plus or minus three percentage points. That margin of error, by the way, wasn’t mentioned in the May 11 story.

That’s odd, especially when the results fall within the margin. What the poll shows is that it’s entirely possible there’s been no gain in support for same-sex marriage. The biggest change is among those offering “no opinion.” That doubled from 5 percent in 2007 to 10 percent today. A more accurate headline might read, “More are indifferent to same-sex marriage.”

With the economy down and the federal government racing to pass big-spending bills likely to bankrupt our children, it’s entirely possible that more people are focused on the economy and simply don’t care about same-sex marriage.

The same Post poll provided fodder for an even more questionable headline. “Md. voters remain divided on death penalty,” declared a headline posted May 11 on the paper’s website. Well, that’s one way of looking at things.

But the poll results on this question are unambiguous. “Sixty percent of Marylanders favor use of the death penalty for people convicted of murder, while 32 percent are opposed,” the story explains. Some divide. When President Reagan was re-elected with 59 percent of the popular vote (to Walter Mondale’s 40 percent) it was rightly seen as a landslide, not a sign of a “divide.”

As the story points out, the state’s governor “has been an outspoken opponent of the death penalty since taking office in 2007, arguing that it is ‘inherently unjust,’ not an effective deterrent and saps resources that could be better spent preventing crime.” So after years of being hectored by their leader, Marylanders remain solidly in favor of the death penalty. There’s your story.

Polls can also be used selectively to make a desired point. “[N]ew polls show the public is much less supportive of offshore drilling than it has been recently,” reads a sentence in a May 12 Post front-pager. “More than a third of all Americans in a new CBS News poll say the big spill is indicative of a broad problem with offshore exploration.”

True, but consider the context.

We’ve had weeks of non-stop coverage. Oil executives grilled on Capitol Hill. Dire reports that oil is about to start lapping up on pristine beaches (“The urgent question along the polluted Gulf of Mexico: How bad will this get?” began a representative Post article). And after all that, only a third of us say there’s a “broad problem” with offshore drilling.

The newspaper doesn’t mention that fully half of those polled by CBS think this was an “isolated incident.” We certainly need to find out what went wrong, and we need to make certain it doesn’t happen again. But most Americans seem to understand that accidents do happen, and should be taken in stride.

One more cliché leaps to mind here: Don’t believe everything you read. Except this column, of course.