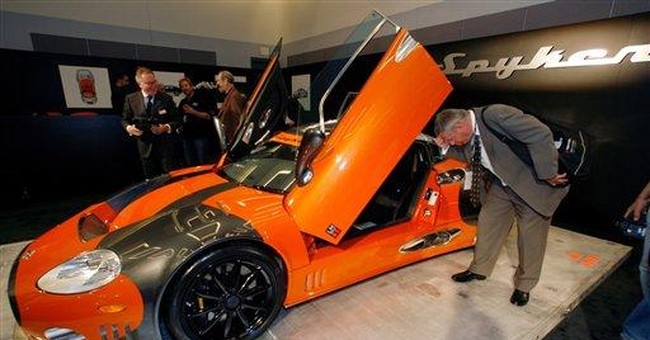 Conservatives have always known how to solve our country’s traffic problem, and it’s surprisingly simple.

The problem is too many cars (the U.S. has more licensed automobiles than licensed drivers) rolling down too few miles of well-paved roads. That’s mostly because private industry makes cars, and they’re good. Fun. Exciting. Useful. Meanwhile, governments build the roads. And they’re inadequate and poorly maintained. No surprises there.

So the solution would be a two-parter. First, privatize the roads, allowing for-profit companies to own, build and maintain them. Just think what happens at a supermarket when too many customers are waiting to check out: The store (privately owned and seeking maximum profits) opens more check-out lanes. Elsewise, potential customers might drop their goods and leave the store.

The same thing would happen on privately owned roads. Companies would build over-capacity into every road, so that at peak times there would be enough lanes. They’d be charging people to drive on the roads, of course, but people would be willing to pay because traffic would move so much more smoothly.

Ah, but the second part of the solution is even more ingenious. Why not have governments build the cars?

A car built by government fiat would have all the innovativeness of anything designed by a bureaucracy. That is to say: none. Lawmakers would insist products made in their districts be included on every car, so government-autos (let’s call them G-mobiles) would be weighted down with a lot of silly gadgets nobody wants anyway.

G-mobiles would be light (to save on fuel) and uncomfortable (no need to focus on comfort when you’re the only game in town). They’d be poorly made, and would break down frequently. And that’s a net plus, of course; since they’d generally be in the shop, these cars would be clogging up the roads, and there’d be plenty of highway space for the few cars that were running at any given moment.

And while that all may sound like a joke, the second part, at least, isn’t. Some lawmakers recently hoped to bail out Detroit automakers in return for partial ownership in the companies. According to an Associated Press story on Nov. 12, “Congressional Democrats are pushing legislation to send $25 billion in emergency loans to the beleaguered auto industry in exchange for a government ownership stake in the Big Three car companies.”

Washington wouldn’t be the first capitol to pour taxpayer capital into the automotive business. In the 1970s and ’80s, the British government took an ownership stake in British Leyland. Before all was said and done, the government had spent $16.5 billion in inflation-adjusted money on the company, which ended up folding, anyway.

“I’m not telling the U.S. what to do, but the lessons of the British experience is don’t throw good money after bad,” Leon Brittan, an aide to former Prime Minister Margaret Thatcher, told The New York Times. “British Leyland carried on for a few more years, but they’re not there now, are they?”

Under government ownership, British cars were notoriously bad. We could expect the same thing here, once members of Congress are acting as automotive engineers. If you thought federal regulations hampered car makers, wait until the government’s in the room during the design process.

Detroit’s automakers have an opportunity, not a crisis. They should declare bankruptcy, rewrite unaffordable union contracts, and design cars that people want to buy. If they were smart, they’d especially focus on the emerging markets of China and India, where billions of people are going to want to buy cars in the decades ahead.

But there’s no need for a bailout. Government-owned roads are inefficient enough; there’s no reason to try to clog them up with government-built cars.