Rich Galen
|
Posted: Jul 14, 2016 9:55 AM
Share   Tweet
The opinions expressed by columnists are their own and do not necessarily represent the views of Townhall.com. 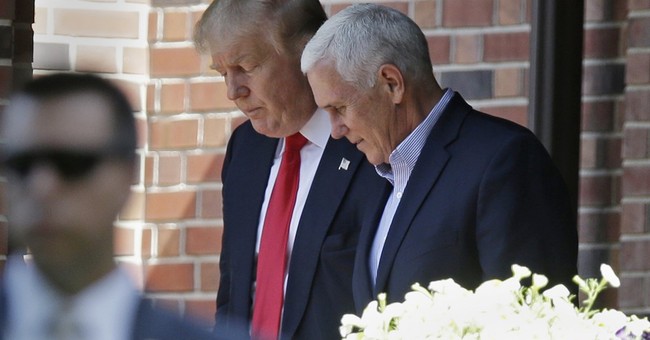 This is one of those things I complain about all the time, and then get sucked into the political vortex all the time: By noon Friday we will know the answer to the question: Who will Donald Trump pick to be his running mate?

Let me repeat. We will actually know the answer within 24 hours, but the hyperventing commentary that grows by the hour has been like listening to Ravels “Bolero” at 78 RPM.

The three men being most talked about as I write this are Newt Gingrich, Chris Christie, and Mike Pence – in the reverse order of likelihood.

My money is on Pence – but for not more than a farthing (see what I did there?); but, my heart is with Newt.

I have known most of the Republican VP candidates since 1980. I had been the press secretary to one of them, Dan Quayle when he was a Congressman and Senator. I came to know H.W. Bush during his term because I ran his Political Action Committee for a while. Jack Kemp (Bob Dole’s VP pick) was a fan favorite who I wish were still with us today. Dick Cheney was a Congressman when I was the communications director at the House Republican campaign committee.

I think Governor Pence would know who I was if someone whispered my name in his ear, but I’m not certain he could pick me out of a crowd. Governor Christie, upon seeing me, would race back through his mind in the “Unindicted Co-conspirator” section but, happily come up empty.

Newt and I met in 1982 when I left Senator Quayle’s office to become the press secretary at the National Republican Congressional Committee – the campaign arm of House Republicans.

Newt had been elected to the House from Georgia in 1978 after losing his two previous tries. If anyone were looking at tea leaves, running against the same guy three times (and finally causing the Democrat to throw up his hands and decide to retire) would have been a pretty good indicator of what was coming.

Newt and I have had a sine-wave relationship since then. We are currently, I believe, at least slightly above the midpoint, but there have been periods – years – when we were at rock bottom.

I was Newt’s press secretary when he was Republican Whip. In those days I didn’t have a staff of dozens in the communications office. I had me. And Newt. We were plenty.

One night, in one of those late-in-the-year interminable sessions when legislation is literally being walked back and forth between the House and Senate for pre-adjournment action, I asked Newt if he would ever run for Senator from, or Governor of, Georgia.

He told me he had an advantage over many of his colleagues because he had only one goal in his life: To become the Speaker of the House.

He did that with the GOP victories in the election of 1994.

Let me correct something that has slipped into my bio – not my written bio, but in what people think my bio contains. I had nothing to do with the Contract With America. In the 1994 cycle, I wasn’t even in politics. I was running the Middle East for EDS, the company that had been founded by Ross Perot.

Newt became the 50th Speaker of the House, and chose not to run for re-election after the election of 1998 when we were consumed with impeaching Bill Clinton but, as it turned out, a significant portion of the electorate was not.

Newt has always been the biggest personality – if not the highest IQ – in the room. No matter what room he walked into. I’m not certain either of those is true when he is in a room with Donald Trump.

Newt is a pretty fair political strategist. So is Bill Clinton. Together they are probably the best combination of political and policy wonks of our lifetimes.

Donald Trump is not.

Although I would be perfectly happy to see Newt on the campaign trail as the VP nominee, I don’t think I will. Newt would become frustrated with the daily, hourly, second-by-second oversight of the Trump people riding herd on every syllable Newt was about to utter to see that it comported with whatever Trump was saying on any given day, hour, or second.

So, my heart is with Gingrich, but my money is on Pence. Therefore, I predict the nominee will be Governor Christie.