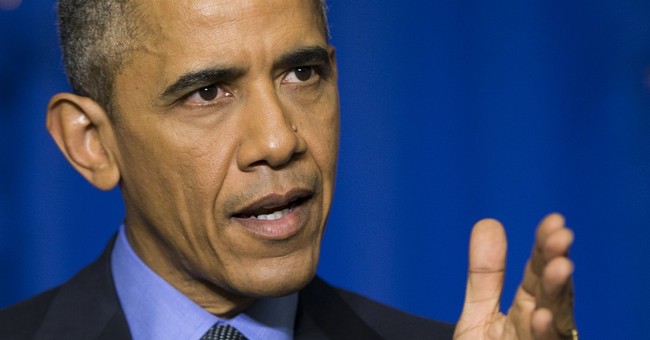 Put aside, for the moment, today's date.

Last night, President Barack Obama delivered a speech that was a defensive in nature as President Jimmy Carter's "national malaise" speech on July 15, 1979.

Carter never actually used that phrase, but it stuck nonetheless because of the tone he took:

"It is a crisis of confidence. It is a crisis that strikes at the very heart and soul and spirit of our national will. We can see this crisis in the growing doubt about the meaning of our own lives and in the loss of a unity of purpose for our nation."

Thirty eight years earlier, President Franklin D. Roosevelt asked a joint session of Congress for a Declaration of War in his "A Date That Will Live in Infamy," speech. Less known than that opening phrase, but more important was this:

No matter how long it may take us to overcome this premeditated invasion, the American people in their righteous might will win through to absolute victory. I believe that I interpret the will of the Congress and of the people when I assert that we will not only defend ourselves to the uttermost but will make it very certain that this form of treachery shall never again endanger us.

On the night of September 11, 2001, President George W. Bush also spoke from the Oval Office saying, in part, this: A great people has been moved to defend a great nation. Terrorist attacks can shake the foundations of our biggest buildings, but they cannot touch the foundation of America. These acts shatter steel, but they cannot dent the steel of American resolve. America was targeted for attack because we're the brightest beacon for freedom and opportunity in the world. And no one will keep that light from shining.

See any difference in tone between Carter's approach and that of Roosevelt and Bush?

The speech was as uplifting as moving van.

It was a speech in which the President attempted to make the case that the Administration and our allies are doing everything we can to shift from defending against al Qaeda-like mega attacks, to defending against lone wolf attacks such as the Fort Hunt, Chattanooga, and San Bernardino events.

The Obama Administration has previously tight-rope-walked-on-barbed-wire to avoid the use of the word "terror" or "terrorism."

According to the New York Times, when Maj. Nidal Malik Hasan shot dozens of soldiers at Fort Hood in 2009 he was tried on murder charges, not on charges related to terrorism.

According to the Times

"The Army's lead prosecutor called it 'the t-word.' Throughout Major Hasan's trial, terrorism was never uttered in the presence of the military jury, neither by prosecutors nor by the more than 100 witnesses they called."

Speaking of trials, this speech sounded more like the closing argument to a jury in a civil case. This is what we faced. This is what we have done. And, for the most part we're going to be doing more of it.

Thank you, and good night.

I know that there is some ground between making it illegal to own an assault-type weapon on the one hand and handing them out at the grocery store on Saturday afternoons on the other. I'm not smart enough or creative enough to figure that out, but there have to be some people in the U.S. who are.

On the matter of banning people who are on the No-Fly list from owning weapons? According to Fox News, there were "47,000 people on America's no-fly list as of August 2013 including 800 Americans."

It doesn't matter whether that number is correct or not, but I know this: If gun ownership is dependent upon appearing on some list that is created, not by a judicial proceeding, but by bureaucratic fiat, it will not take long for that list to grow from 800 Americans to 8 million Americans as a gun control measure - not a airline safety measure.

President Barack Obama got elected in large part on his ability to move people through the spoken word.

It seemed to me that he was forced into giving that speech because the polling, not our national posture, demanded it.

It was a speech that recounted his tactics in the war on terror, not any new strategy and he certainly didn't share a vision for making America and Americans safe.