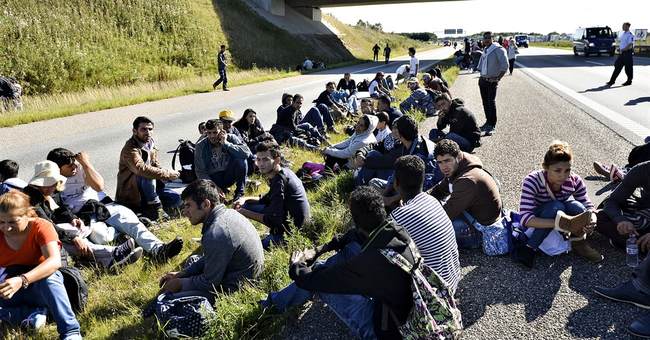 First, some definitions from Merriam-Webster:

Migrant: A person who goes from one place to another especially to find work

Refugee: A person who flees to a foreign country or power to escape danger or persecution

Immigrant: A person who comes to a country to take up permanent residence

With all the projectile sweat over illegal immigrants generated by Donald Trump and parroted by other GOP candidates for President it is useful to take a deep breath to compare and contrast the problems at our southern border with Central and South Americans to the problems in Europe with (largely) Syrians and Iraqis.

As we have discussed before, all species - plant and animal - will migrate from poverty to plenty. A flower will depend upon the wind to germinate in better soil. A herd of wildebeest will migrate to better grazing. People will go from scarcity of food, work, housing or safety, to where there is a relative abundance of those basic human needs.

If we believe Noah Webster's and the Merriam Brothers' heirs as to the definitions, then a better name for most of the people coming across the border from Mexico would be "illegal migrants" - which is not as alliterative as "illegal immigrants" and, so will not find favor with TV news hosts and newspaper headline writers.

It is my considered opinion that a significant proportion of "illegal immigrants" in the U.S. are coming over the border to find work. Many, to be sure, are coming to "find permanent residence" but relatively few fall into the refugee category.

That is a far different kettle of pescado from what we are witnessing with the flood of people risking their lives and the lives of their families to escape the death an destruction being dealt by Syrian President Bashar al-Assad on the one hand, and ISIS on the other.

CNN reported last April: Since civil war broke out in Syria, 310,000 people have been killed, [according to] the Syrian Observatory for Human Rights

Add to that recent estimates that 11 million Syrians have been displaced internally and externally, and you have some idea of the scale of fear that is gripping the refugees trying to make their way to Europe.

The big news over the past 10 days has been the choke point in the trek which has been in Hungary. More specifically in Budapest. Most precisely at the Keleti train station in Budapest.

I didn't understand why the Hungarian Prime Minister, Viktor Orban (whom the Washington Post referred to as "Europe's Donald Trump") was so adamant about keeping the refugees from leaving Budapest en route Austria and Germany.

Germany made it clear it would welcome up to 800,000 refugees, but Orban, according to the Post, "warned that Europeans now stand to become 'a minority in our own continent' if the floodgates are not immediately closed."

The claim is that if Europe becomes too welcoming, it will act as a magnet attracting not just refugees trying to get out of mortal danger, but migrants who will take Europeans' jobs, or immigrants who will come with no intention of ever going back.

In the U.S. once someone is in the country, they can move from one state to another without going through any sort of border controls. The general rule in the European Union is just about the same.

According to the BBC, an "asylum seeker" (which gets the BBC out of that pesky definitional issue) is to be processed in the first EU country they encounter. Thus, once a family is "feet dry" in, say, Italy they can freely move throughout most of the EU.

I am planning to go to Hungary on the 30th of this month to see for myself (and report to you) what the "asylum seekers" are really seeking.

I'm not sure what I will find out, but Syrians have been in Syria since at least 65 BC when they were overrun by the Romans. Syrians lived in Syria for the 400 years that they were part of the Ottoman Empire. They lived there through World Wars I and II and under French rule.

Something has gone horribly wrong and if it can happen in Syria, where else can it happen?

I'll let you know if I find out.