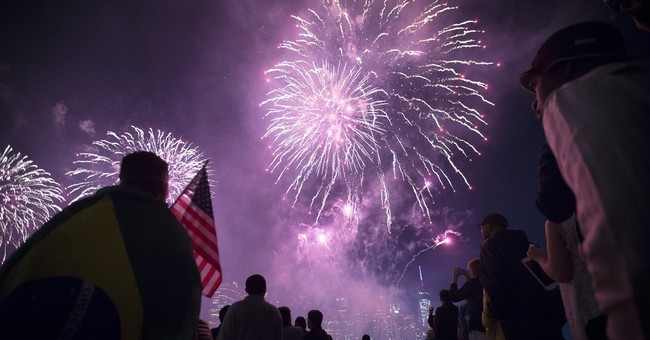 If you've ever watched PBS on July 4th, you know that for many years your local affiliate has broadcast the "Capitol Fourth" program which is the concert on the West Lawn of the U.S. Capitol followed by the fireworks which are beyond the Washington Monument on the far end of the Smithsonian Mall.

Our first Fourth of July in Washington, DC was in 1978. The woman who would become the Mullings Director of Standards & Practices and I took our son, then a little over two-years-old, to the steps of the Jefferson Memorial where we met some friends to watch the fireworks.

In the manner of all way-off-the-chart-smart 27-month olds, Reed watched the fireworks and pronounced them "boom lights."

Twenty years later the MD of S&P and I watched them again. But, this time we were on the Speaker's Balcony of the Capitol, a guest of Speaker Newt Gingrich. We could look down and watch the wonderful concert and feel the waves of joy from the thousands of people on the lawn between the stage the steps of the Capitol.

When the orchestra struck up the 1812 Overture, we could look up and watch the fireworks rising into the sky with Washington Monument silhouetted before them.

In those days I was the executive director of GOPAC. A few days after that remarkable experience on Independence Day, I either got a call from, or made a call to, the Washington Bureau Chief of NBC News - Tim Russert.

In the course of our discussion I mentioned the fact that my wife and I had been guests of the Speaker at the Capitol. I said that in even in 1998, there were precious few countries on the planet where the son of a Jewish upholsterer from Brooklyn could be on the balcony of one of the most important buildings in the world celebrating the America's birthday.

Tim was silent for a time and said he wanted to read me something. It turned out that he had been selected to be the man-of-the-year of the Buffalo, New York American Legion.

Russert was not a foolish man. He knew he had been named "Man-of-the-Year" so they could have a dinner that people in Buffalo would pay money to attend, thus raising money for the Buffalo American Legion at which his dad - Big Russ - spent a good deal of time. So, he happily accepted the honor.

He read to me his acceptance speech which was a recitation of his dad, Big Russ', biography. He had been a gunner on a B-17 in World War II. Been shot down. Been pulled from a burning plane by a Polish guy from Chicago. Had come home and gotten a job "humping potatoes at the Safeway" and then got the job of a lifetime.

Big Russ signed on with the Sanitation Department of the City of Buffalo, New York.

By this time, we had been reduced to two 50-something adult men sobbing along with one another on a telephone call.

It wasn't because we were depressed about how hard our ascents from blue collar backgrounds had been.

We were sobbing - this Jewish son of an upholsterer and the Irish son of a sanitation worker - because in America it just doesn't matter from whence you come. It only matters how hard you have worked to get where you are now.

We'll watch the 2014 edition of "A Capitol Fourth" from our home in Alexandria, Virginia. The Lad, his wife, and their daughters - the youngest about the same age he was in 1978 - will be watching from their home in Southern California.

As you watch the program, wait for the boom lights; think about that conversation with Tim; then raise a glass to the memories of all those upholsterers and sanitation workers who passed along this great nation to their children, their grandchildren and, if you are as blessed as we have been, their great-grandchildren