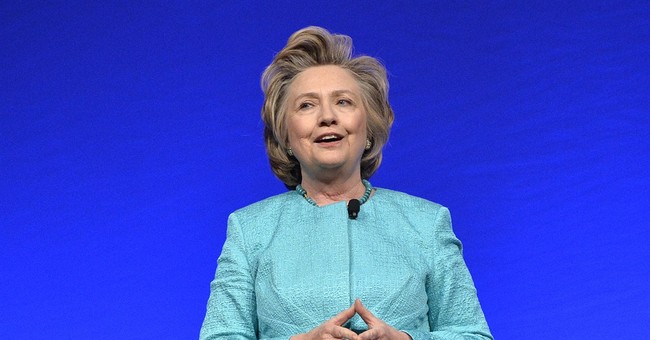 I hope this is the last time I write about this, but Hillary's email issue is not going to go away any time soon in spite of her press conference at the United Nations on Tuesday.

First, you have to give the Clintons credit for using the tools they have available. No other non-incumbent, sort-of candidate for President in the history of the Republic would have been able to hold a presser at the UN immediately after having delivered a speech there.

Jeb might be able to hold a press conference in Miami after an appearance at the in-water boat show, but you see what I mean.

In fact, before taking any questions she thanked the UN for allowing her to speak there. Just in case you forgot who you were dealing with.

It was clear that Hillary's team had been in touch with Obama's team because she also took a swipe at the 47 Republicans in the Senate who signed a letter to Iran to remind the Iranian government that a deal with President Obama without Congressional approval is not a deal. Clinton asked what the Senators could have had in mind. This via CNN:

"There appear to be two logical answers," Clinton said. "Either these senators were trying to be helpful to the Iranians or harmful to the commander-in-chief in the midst of high-stakes international diplomacy. Either answer does discredit to the letter's signatories."

That was guaranteed to make at last an additional headline to distract from the issue at hand: Her emails.

I'm not a federal administrative law expert and I'm not an ethics genius. I've been in the Executive Branch and the Legislative Branch and I have, like everyone else, chafed under what I thought were dumb or indecipherable rules. But I did my best to obey.

Clinton said that she didn't want to carry two devices around so she decided to carry one and the one she carried went through her private family email server. Secondly, she used emails pertaining to her mother's funeral and Chelsea's wedding/pregnancy as the sort of private matters she doesn't think need to see the light of day. Third, she said (offhandedly, I thought) that the server was private and would remain private.

Finally, she said she never sent nor received any classified emails.

Without parsing every syllable of every word in every sentence let me make a few points.

Quick! What State do you think of when I say "Embarrassing and dysfunctional? Right. Arizona.

Arizona has a new Governor, Republican Doug Ducey, and he has done what I would have thought impossible: He got the state legislature to approve a budget on time (only Virginia passed a budget earlier) and that budget closed a budget shortfall that was in the area of $1.5 billion.

It was bipartisan in the sense that a couple of Democrats in the Legislature signed on, but it does show that leadership counts and 48 other Governors might want to put someone on a plane to chat with Gov. Ducey's folks to figure out how they did it.