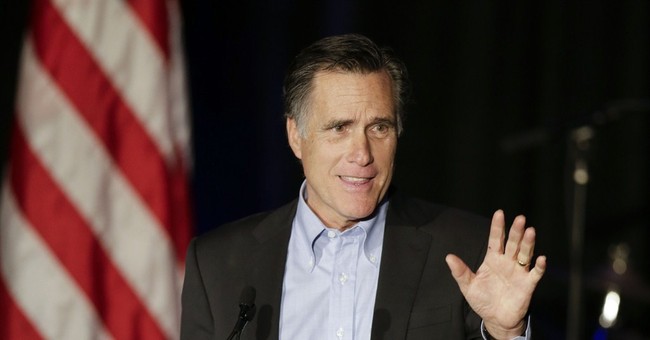 The decision by Gov. Mitt Romney to drop out of the nominating process for President about three weeks after he had surprised most of the Washington-based punditry by appearing to be serious about getting into the race.

He held at least two conference calls last Friday to announce he was going to take a pass on this cycle.

Mitt Romney was a serious candidate in 2008 but was outlasted by Sen. John McCain. Romney came in third among GOP candidates who carried delegates into the convention just behind Gov. Mike Huckabee, but ahead of Rep. Ron Paul.

McCain went on to lose to Barack Obama 365-173 in the Electoral College, and returned to the U.S. Senate.

>Romney's people said he had learned a lot about running for President in that 2008 campaign and was tanned, rested, and ready for another run in 2012.

The Republican primary campaign lasted forever with one challenger after another bobbing to the top to challenge Romney. Michelle Bachmann enjoyed about three weeks of glory winning the Iowa Straw Poll in the summer of 2011. She was followed by Texas Gov. Rick Perry who waited until just after the event in Ames, Iowa to announce his candidacy.

Rick Santorum, Herman Cain, and Newt Gingrich all had their days in the sun as the primary campaign ground through the states with debates tumbling over debates.

Ron Paul was never taken seriously by the national press, but came in second or third in 34 primary elections from Vermont to the Northern Mariana Islands.

It wasn't until the second week in May 2012 that Romney could clear the field and became the presumptive nominee.

The GOP national convention was held in Tampa, Florida during the week of August 27 but, in a development that turned out to be prophetic, Hurricane Isaac was approaching the Gulf Coast of Florida and the Republican National Committee cancelled the first night's activities.

Barack Obama's re-election team used the period leading up to the August convention to characterize Mitt Romney as an out-of-touch multi-multi-millionaire whose investment firm bought companies, laid people off, cutting off their health insurance, and generally being a bad citizen.

It was an unfair characterization, but the Romney campaign could not overcome the tens of millions of dollars the Obama team threw into the effort.

It proved one of the most basic axioms in politics: Define yourself or your opponent will do it for you.

On election day, Barack Obama cruised to a relatively easy re-election winning in the Electoral College 332 - 206 which was better than McCain had done but not anything like the nail biter Republicans had been hoping for and working toward.

Conservative Republicans have been complaining ever since that every time the "establishment" picks the nominee, the GOP loses. Calling Senator McCain an member of the establishment is amusing, but what they are really saying is there is a need for a more ideologically pure candidate atop the GOP ticket in 2016.

Why did Romney decide to bow out? We'll probably read a dozen essays a day every day this week written by, or with the knowledge of, Romney insiders.

Not being a Romney insider and having to spend the weekend preparing for my Super Bowl watching, I will enter my guess: Romney became convinced he could be the nominee only by beating Jeb Bush. And the amount of blood, sweat, tears, and money it would take to do that would leave him (or Bush) so weakened that the Democratic nominee - Hillary Clinton or not - an easy path to the West Front of the Capitol on January 20, 2017.

Getting out of the race makes Romney - like Newt - a highly quotable source on a wide variety of issues that will not be viewed through the close-up lens of a Presidential candidacy.

The other announced candidates were probably on the phones all weekend wooing the Romney donors and Romney advisors.

With Romney out, other present and former Governors as well as present and former Senators likely spent the weekend with their political teams mapping out a potential "path to victory" and checking flight schedules to Des Moines and Manchester.

The 2016 cycle has a long way to go and Romney's early departure may make the process of selecting a Republican nominee more, not less, complex.