Lots of Noise in DC & NY 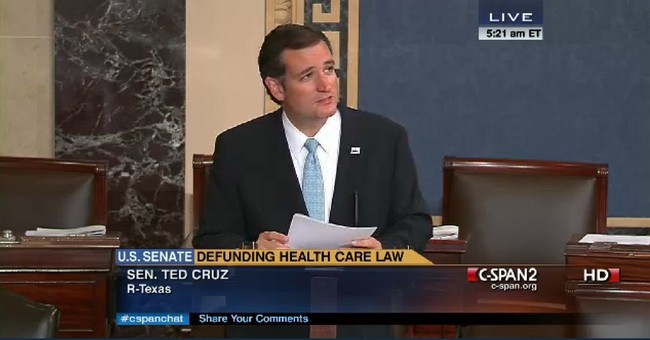 Here in Our Nation's Capital it is difficult to catch your breath as the days tick by toward September 30 - the end of the 2013 Fiscal Year.

On the Senate floor yesterday, Texas Republican Senator Ted Cruz (who is opposed to ObamaCare) filibustered a bill that had not been brought to the floor. As I type this at 10:10 PM Eastern time, Cruz had been speaking since shortly after 2:40 yesterday afternoon.

He had been speaking for a little over six hours, reciting everything from carefully reasoned anti-ObamaCare arguments to readings from Dr. Seuss but, as I made my way to CSPAN 2, the first words I heard Sen. Cruz say were: "Even fools seem smart when they are quiet."

Even if you are a fan, you have to admit to the irony of those words.

When it comes to defunding ObamaCare in return for getting a Continuing Resolution to fund the Government until the end of the calendar year - it doesn't appear likely that will happen. Any more than it is likely an asteroid will fall through the roof of your garage and land in the back seat of your car today.

According to one well-placed insider who - unlike me - actually knows what he is talking about, the path forward will be a "clean" CR at current (that is to say extending the sequester) levels.

Apparently the White House and Senate Majority Leader Harry Reid (D-Nev) have signaled they are OK with that. Again, as I am typing this, there is no word from House Minority Leader Nancy Pelosi (D-Ca) as to whether she will approve, nor whether Minority Whip Steny Hoyer (D-Md) will be able to round up the 40-or-so Democratic votes that will likely be necessary to push it over the top in the House.

On the ObamaCare front, the plan is to delay implementation for one year - aligning the entire bill with some parts that have already been pushed back. This would not defund ObamaCare, but it is much harder for Democrats to argue against it, given the AFL-CIO's support, a number of bills already adopted, and the Department of Health and Human Services' decision to delay certain parts.

If everyone were playing with a full deck I could make the case that this is a good solution because it gives Congress a year to decide how (or whether) to amend or rescind ObamaCare.

However, because most of the 535 Members of the House and Senate are playing with cards that have no markings on either side, I feel confident that even if my source is correct, we will be back here in late September of 2014 facing exactly the same set of issues.

Meanwhile up in New York City Bill Clinton and President Barack Obama had a well-covered discussion about the GOP playing politics with health care.

I can't be the first person to point out that they are the only two men in American history whose push for a national health care system caused them to control of the House of Representatives. Clinton in 1994, Obama in 2010.

Also in New York the diplomatic press corps was breathlessly reporting that President Obama would "meet with" Iranian President Hassan Rouhani during the opening of the U.N. General Assembly session.

This "meeting" was never likely to be a formal sit-down - that's not the way diplomacy works. U.S. officials said it would simply be "an encounter," but Rouhani didn't even want to be in the same place at the same time with Obama. That might have had more to do with domestic Iranian politics than diplomatic chess playing, but it didn't happen.

You can look at that two ways. First, that when the President of the United States makes it clear he (or, someday she) would like to have a chat and that offer is rebuffed, it is a huge international embarrassment to the American President.

I look at it the other way: You can put your hand out for a shake, but you can't make the other guy take it.

I assume the U.S. Department of State agrees with me that I wouldn't trust Rouhani as far as I could throw the whole nation of Iran, but that doesn't take away from the President's offer.

There was a lot of noise, yesterday, but not much progress.