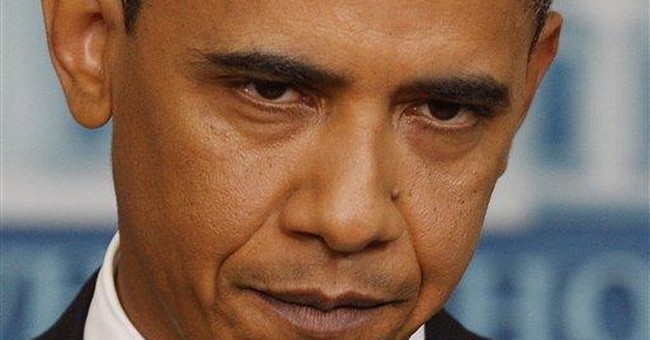 After a week of golf and general dithering on Iran, President Barack Obama finally realized what most everyone else has known for the better part of a century: The world's bully pulpit belongs to the President of the United States. Not the President of France and not the German Chancellor.

Obama appeared befuddled by events in Iran since the demonstrations began following a disputed ballot in which the Iranian government claimed that President Mahmoud Ahmadinejad had been re-elected.

Maybe he was, but the government pulled out all of its anti-freedom assets - the army, the police, and the militia - to brutalize the demonstrators.

Ultimately the situation was brought into HD focus by the cell-phone video showing a young woman shot and dying on a Tehran street.

All week long, Democratic strategists swarmed the cable news chat shows having to defend Obama's weak performance by saying the U.S. should not "meddle" in the internal affairs of Iran.

For his part, the best Obama could come up with as recently as last Tuesday (three days into the demonstrations was:

"I do believe that something has happened in Iran where there is a questioning of the kinds of antagonistic postures towards the international community that have taken place in the past."

Go ahead. Read it again. Does that sound like a strong leader; confident in his abilities, comfortable in his choices, convinced of his course?

In fact, that sounded to me, in the words of Col. Sherman Tecumseh Potter, like horse hockey.

Then Obama went on to say, "When I see violence directed at peaceful protesters, when I see peaceful dissent being suppressed, wherever that takes place, it is of concern to me, and it's of concern to the American people."

That sounded to me like the Tom Joad speech at the end of "Grapes of Wrath," although not as well written.

All that to say that the President got a Jethro (not Robert) Gibbs slap in the back of the head and at his press conference yesterday got into his tough-talk mode:

"The United States and the international community have been appalled and outraged by the threats, beatings and imprisonments of the last few days."

According to David Jackson, and Richard Wolf's reporting in USA Today, "Obama denied that he had taken too long to condemn the violence, as some Republicans in Congress have charged, including Sen. John McCain, R-Ariz., his opponent in last year's election."

Deny though he might there is a pattern about Obama's lack of self-confidence in foreign policy which reaches back to last summer when, as Sen. Obama was vacationing in Hawaii, Russia made an incursion into Georgia. Sen. John McCain responded immediately denouncing the Russian move; Obama took a day-and-a-half to come up with a response.

All politics aside, this is a dangerous world and there are dangerous people in control dangerous weapons all over it. President Obama might be working on burnishing his "calm-in-the-face-of-turmoil" credentials, but the bad guys, not be as sophisticated as Obama might hope, might well read that as weakness.

I'm not suggesting we commit troops any time there's trouble abroad. I am suggesting that President Obama make better use of his bully pulpit.