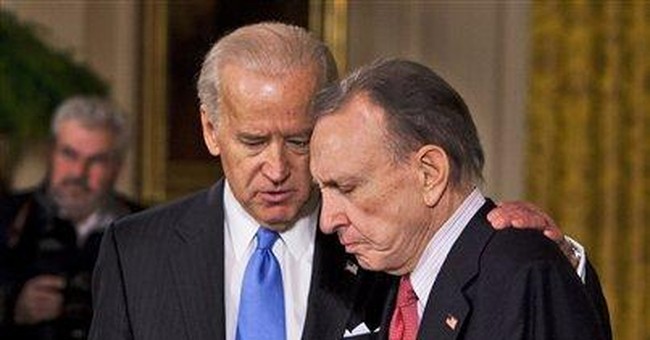 It was just a matter of time. Joe Biden has disappointed all of official Washington with his lack of really juicy quotes.

On Thursday morning, for reasons I would like to better understand, the Administration stuck Biden on the Today Show to discuss … Swine Flu.

Joe came through. On the same day that Chrysler went bankrupt because people stopped buying cars, Biden suggested people stay off airplanes to avoid the risk of, well, dying.

"I would tell members of my family, and I have, I wouldn't go anywhere in confined places now. It's not that it's going to Mexico, it's you're in a confined aircraft when one person sneezes it goes all the way through the aircraft. That's me. I would not be, at this point, if they had another way of transportation suggesting they ride the subway. "

Very few subway systems in America are held by private companies. But just about all the airlines are. He specifically said "It's not that it's going to Mexico, it's [that] your in a confined aircraft…"

Biden's press office, of course, pretended Biden hadn't said anything of the sort. His spokeswoman said

"The advice he is giving family members is the same advice the administration is giving all Americans: That they should avoid unnecessary air travel to and from Mexico. If they are sick, they should avoid airplanes and other confined public spaces, such as subways."

Biden also said, "If you're out in the middle of a field and someone sneezes that's one thing. If you're in a closed aircraft or a closed container or closed car or closed classroom it's a different thing."

- Hearing the airplane remark, not once but twice, all 103,050 employees Air France surrendered.

- The transit workers in Chicago and San Francisco went on strike.

- The crew of the International Space Station, claiming they are in the ultimate "closed container," donned their space suits and refused all requests from mission control to take them off.

- Every one of the 19 students in Mrs. Moore's 4th grade class at Hillside Grade School on Long Island wet themselves.

For my part, I spent the night at Nationals Stadium at which there were 18,007 fans in a stadium that holds about 40,000. That, I think, qualifies for the safety of "the middle of a field."

Someone, somewhere in the stands may have sneezed during the game, but I feel fine, thank you.

Robert Gibbs the White House press secretary didn't want any part of that "same advice the administration is giving all Americans" horse hockey. The White House wanted Obama as far away from Biden as the last seat in coach is from the bulkhead in first on a 747 flying at 1,000 feet over the Statue of Liberty: "Obviously, if anybody was unduly alarmed for whatever reason, we would apologize for that," Gibbs said.

Translation? "Biden is a moron. You know it. We know it. Let's move on."

Speaking of moving on, the Obama Administration continues its Orwellian policy of naming things which are non-descriptive. Remember when they started calling the War on Terror "Overseas Contingency Operations" and how they want a Star Chamber investigation into torture called a "Truth Commission?"

It seems the Hog Producers have squealed a bit about their product getting a bad name so, according to the NY Times, it will no longer be called the Swine Flu. Henceforth it will be called "Influenza A(H1N1)."

Let's see the New York Post come up with a pun for that.

I have a better idea for a new name. How about Montezuma's Revenge?