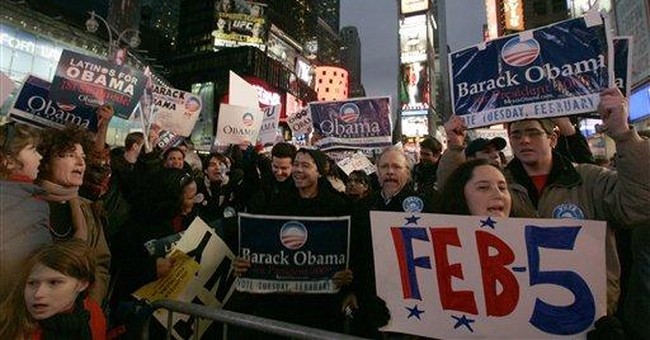 I am not unaware that Tuesday is not just any Tuesday, but it is SUPER TUESDAY during which thousands of states will be holding winner-take-all, proportional, CD-by-CD, or some other formulation of primaries and/or caucuses.

Last night was Super Bowl Sunday and I suspect that you were among the 90+ million - MILLION - people who watched some or all of the game.

As to Über Tuesday, here's what I think will happen: John McCain will do well enough in enough states to stake a claim to being the Nominee Presumptive. It may take until Thursday afternoon or Friday morning, but Mitt Romney and Mike Huckabee will come to accept that reality and will drop out.

Ron Paul will never drop out. He is of the Libertarian wing of the Republican Party which believes stop signs are an unconstitutional infringement upon their personal freedoms, and so will stay in as long as he can afford the air fare.

Back to the Super Bowl. I don't gamble. I have no moral objection to it, I just stink at it and don't like watching my money spiral down a toilet.

Nevertheless, I found a betting website which allowed players to bet on everything from who would win the coin toss (Giants did) to - I suh-WEAR this is true - "How Many Times will Joe Buck mention Peyton Manning's name during the Broadcast?" (I have no idea what the winning bet was)

As you know, I take a technical view of commercials. In the political world, I don't care how pretty, how clever, or how creative an ad is. The only thing which matters is: Did it move votes?

In the civilian world, my rule is: Would it make me think about buying something I otherwise would not?

On that criterion, the best ad of the day didn't come during the Super Bowl. It came earlier in the day and was Tiger Woods talking about a Buick SVU. After seeing that ad, if I were considering buying a vehicle, I would hike over to a Buick dealer.

I would not buy a Pepsi, nor sign up with Godaddy.com, nor run over the Safeway to buy a package of Doritos based upon the ads I saw during the Superbowl.

On the creative front, however, the Budweiser ad which channeled the "Rocky" movies was breathtaking - if only because it told the entire story (which, according to the IMDB.com website, took 119 minutes in the original 1976 film) in only 30 seconds.

As I had never heard of Tom Petty and the Tomcats (or whatever the name of the band was which played at halftime) I watched about 20 minutes of "How It's Made" on the Discovery Channel and now know everything I believe I will ever need to know about cranberries and how they are prepared for market.

What happened to the good old days when the Super Bowl halftime featured REAL Americans like Paul McCartney?

On a completely different subject, a study by Clemson University reported in the New York Times proves that the infamous Seinfeld episode in which George Costanza is caught "double dipping" his chip into the dip is true.

"Before you have some dip at a party, look around and ask yourself, would I be willing to kiss everyone here? Because you don't know who might be double dipping, and those who do are sharing their saliva with you."

My guess is, Professor Dawson doesn't get many dates.