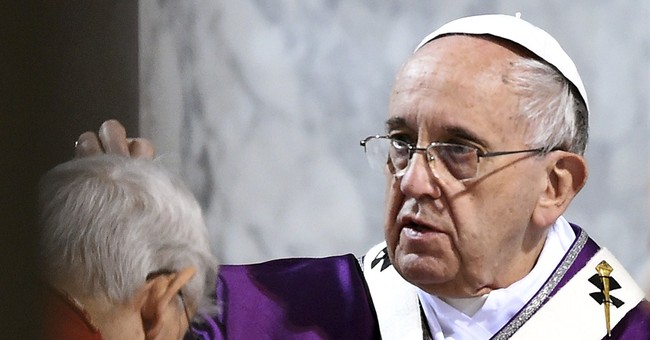 Editor's note: This piece was co-authored by the author's daughter, Kristin Carey.

If you showed up at an Ash Wednesday service last week, chances are you heard the word “repentance” quite a few times. It isn’t a term we often use outside of a church context. It’s one of those scary-sounding “Christianese” words that few of us feel comfortable with, probably because it conjures up images of crazy old men standing on street corners, holding picket-signs and yelling at people as they pass by.

Look it up in the dictionary, and you’ll find explanations like “to feel sorry,” “conscience-stricken,” and “self-reproachful.” Pair that with the dust and ashes that represent our mortality, and the fasting that serves as a constant reminder of our frailty, and the whole idea of repentance—the whole idea of Lent, which is a long season of repentance—may sound pretty miserable.

Judas gets a bad rap because he betrayed Jesus for pieces of silver. But Peter denied Jesus on the very same day. In fact, every single one of Jesus’ disciples abandoned him on his way to the cross.

When they realized what they had done, both Judas and Peter were overcome with grief. Matthew 27:3-4 (NLT) says:

“When Judas, who had betrayed him, realized that Jesus had been condemned to die, he was filled with remorse. So he took the thirty pieces of silver back to the leading priests and the elders. ‘I have sinned,’ he declared, ‘for I have betrayed an innocent man.’”

And when Peter realized his betrayal, Matthew 26:75 says, “he went away, weeping bitterly.”

Both men failed Jesus, their dear friend and teacher. And both men deeply and sincerely regretted their terrible mistakes. But the story ends differently for each man. Peter, known to the Catholic Church as the first pope, became the rock upon which Christianity was established. Judas left the Temple and hanged himself.

It wasn’t Judas’s mistake that sealed his fate—it was his response to it. The sorrow Judas experienced was distinct from Peter’s. It was marked by a crippling shame that dragged him quickly to his own spiritual and physical death.

Peter, on the other hand, who was known to be rash before Jesus died, was changed by his sorrow. From the moment he began to weep, he became simply and purely eager—eager to reconnect with the man he had betrayed, eager to be back in Jesus’ presence.

When the news came that Jesus had risen from the dead, Peter and John got up and raced to the burial site to see for themselves. John got there first, but perhaps out of respect or fear, stopped short of the opening to the tomb. But when Peter arrived, he didn’t hesitate to rush right in.

Later, when Jesus showed up by the Sea of Galilee, Peter demonstrated his eagerness again. He was out on the boat with the other disciples, but when he realized Jesus was standing on the beach, he leapt into the water and swam to shore, leaving the others behind. Nothing was going to stop him from being with Jesus again.

Jesus was not surprised by the fact that Judas, Peter, and all his other disciples betrayed and deserted him. (He actually predicted that they would.) And he isn’t surprised by our mistakes either. He died and rose again to offer them—and us—the option to come rushing back into his welcoming, healing presence when we realize our brokenness. So now, we have two options when we are faced with sorrow at our own imperfections: we can either let shameful regret lead us into deeper darkness, or we can repent as Peter did.

Repentance is marked by change that brings the wanderer back onto the right path, back into the Lord’s presence. 2 Corinthians 7:11 (NLT) describes it like this:

“Just see what this godly sorrow produced in you! Such earnestness, such concern to clear yourselves, such indignation, such alarm, such longing to see me, such zeal, and such a readiness to punish wrong.”

That kind of sorrow is life giving and it always results in deeper joy and renewed relationship with God. That is what repentance is all about, and that is what Lent is all about. It is made to bring us to the place where we let God move in to start working on another small bit of ourselves. Where we decide to return to him rather than to give up.

In The Road to Daybreak, Henri J.M. Nouwen wrote:

“Jesus came to open my ears to another voice that says, ‘I am your God, I have molded you with my own hands, and I love what I have made. I love you with a love that has no limits, because I love you as I am loved. Do not run away from me. Come back to me—not once, not twice, but always again… Do not judge yourself. Do not condemn yourself. Do not reject yourself. Let my love touch the deepest, most hidden corners of your heart and reveal to you your own beauty, a beauty that you have lost sight of, but which will become visible to you again in the light of my mercy.’”