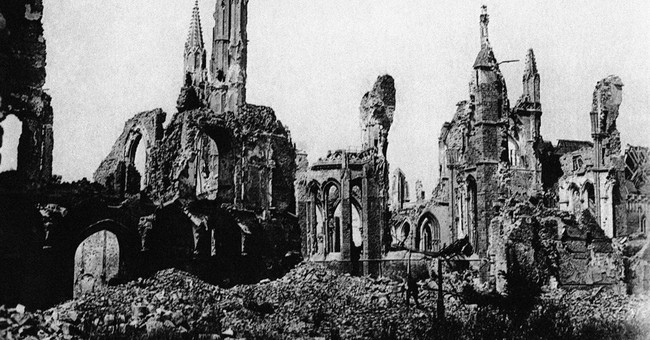 We citizens sense that we are being lied to by those in authority. We can’t quite put our finger on it. We are right, though. Let me guide your finger to the spot.

The biggest lie that Big Government, Big Business, and Big Media telling us is that we are still at Big War.

Big War is the ultimate predicate for Big Government. The shocking truth: Big, if imperfect, Peace has broken out. This slightly lonely columnist previously has made this point. It bears repeating, especially this week, the centenary of the start of the Hundred Year War.

What is the evidence for the dawning of Peace? The number of battlefield deaths, according to the experts in such matters, has dropped from 60-70 per 100,000 in the last century to one per 300,000. That’s a stunning decline ... following a trend in effect for centuries.

As this columnist elsewhere has noted Steven Pinker’s The Better Angels of Our Nature: Why Violence Has Declined, Joshua Goldstein’sWinning the War on War, and the Human Security Report Project — previously summarized by this columnist in Forbes.com — light the way:

The scale of this is difficult to grasp. Stalin reportedly said that “If only one man dies… that is a tragedy. If millions die, that is only statistics.” The perpetuation of the notion we are at Big War is the key justification for Big Government.

Remember Orwell's 1984? Oceania is at endless war with Eurasia or Eastasia, "to keep its people permanently mobilised, scrutinised and on rations."

The Wartime condition happens to be a Big Lie, or, if one is more charitably inclined, an atavism. The myth is perpetuated, in part, due to our not having had a Big V-Day celebration — with an Albert Eisentaedtesque VJ Day photo in Life Magazine showing a Navy swab kissing a nurse in Times Square in celebration. Shortly thereafter, the fact of peace having been assimilated, America demobilized, dramatically cutting its military. An era of equitable prosperity dawned.

So why now, then, a time to reiterate this point? And why does it matter?

On June 28th we somberly observe the 100th anniversary of the event that plunged the world into a century of all-out, brutal, war. On June 28, 1914 Bosnian Serb nationalist Gavrilo Princip assassinated Archduke Ferdinand, heir-presumptive to the throne of the Austro-Hungarian Empire, and his beloved wife Sophie. To the shock of a world which believed all-out war was, at best, futile, the world plunged into Hell. Empires then fell, leaving only a few to mourn them.

When the Big Lie of Big War is dispelled and the fact of Big Peace is understood, America will realize that it safely can step down from its wearisome and expensive stand as the world’s sole Hyperpower. We can then more rapidly and gracefully return to a peacetime footing ... as we did after World Wars I and II ... and get on with what America really does best: liberal republican prosperity and an ongoing campaign for human dignity, at home and abroad.

Many people find, in an infotainment environment flooded with images and headlines of war, the claim that peace is breaking out preposterous. The news business thrives on drama. Stories about recurring harmony, and disputes being civilly resolved, are boring. Peace does nothing to drive ratings or page views.

As the father of modern poetry Ezra Pound once wrote, in Sestina Altaforte:

Damn it all! all this our South stinks peace.
You whoreson dog, Papiols, come! Let's to music!
I have no life save when the swords clash.
But ah! when I see the standards gold, vair, purple, opposing
And the broad fields beneath them turn crimson,
Then howls my heart nigh mad with rejoicing.

May God damn for ever all who cry “Peace!”

[Let it be said that this does not reflect Pound's own sentiments. Pound was clear that Dante consigned the figure upon whom this sestina was modeled to the Eighth Circle of Hell, "condemned to be hacked to pieces over and over again for his role in fomenting a quarrel...." Nota bene, ye who enter here.]

This columnist does not claim that there is no war. He merely points out that there’s a profound difference, in scale and intensity, between present circumstances and World War. World War comprises existential threat of utter national destruction or enslavement a la World Wars I, II, III (the “Cold War” threatening world nuclear destruction or Stalinist domination, breaking hot and heroic in Korea and Vietnam), and that ghost war, World War IV, deemed the “War on Terror." We won all of these.

Yes, we must remain vigilant. There is no prospect of reaching a zero-violence Utopian world. Yet the threat has turned asymmetrical rather than existential.

The century-long World War is over. We won.

American victory over tyrannies -- that key political fact -- transforms everything. Among the thought leaders astutely showing awareness of this crucial development are the good doctors Ron and Rand Paul. Rand Paul's unique political grasp of the emergence of peace is a trump card should he decide to run for president. Peace, that inconvenient truth, trumps the false-consciousness of those calling the Pauls "isolationist."

A century of war has, without due celebration, ended. A major celebration is in order. With the end of world war the existential predicate for Big Government ends. Without the celebration of victory -- to demarcate the end of war -- the populace remains vague about the fundamental mistake belaboring our society and politics. The electorate desires, and senses, peace. Time to declare it.

This centenary is not academic. It has political ramifications. Princip's bullet changed everything.

At the moment that Princip fired his pistol 80% of humanity lived under an Imperial world order. Five Imperial dynasties reigned: Austria-Hungary; Russia; China; the Ottoman Empire; and Great Britain. Four of these toppled within a decade. The British Empire the least autocratic of these, went into irrevocable decline. Thousands of years of reigning monarchy and Imperial rule ended in shockingly brief compass.

Rather than "making the world safe for democracy,” however, tyrannies arose. It took a second world war to eradicate the dictatorships of the West and Japan -- Nazism, Fascism, and Japanese military imperialists -- and to implant liberal republican governance in Western Europe and Japan. It then took a third world war, the Cold War, to dislodge Communist tyranny in Eastern Europe and implant liberal republican governance principles, however imperfectly, there and in Latin America. (Too many nations remain tainted by oligarchy antithetical to free market capitalism and liberal republicanism. Yet it is a clear step up from dictatorship.)

After the Cold War we were hit by 9/11. Reading the fine print, as pointed out by University of Michigan's Prof. Juan Cole, among others, Al Qaeda’s (and now ISIS's) stated goal was a revanchist effort to expel America from the Middle East in order to restore an imperial world order, the Caliphate: the Ottoman Empire.

It is far more likely, as Jeffrey Goldberg observed and observes in The Atlantic Monthly, that the end result will be to rearrange the Mideast into smaller states. This will entail the peoples of the Middle East redrawing the artificial national boundaries put in place by the Western colonial powers after World War I into more organic nation-states. This bloody reorganization, however, is most unlikely to restore an atavistic Imperial order, whatever the grandiose pretensions.

Those who celebrate War might yet precipitate World War V. Many believed that the “Great War” was, because economically futile, unthinkable. They were proved wrong. Renewed world war remains a real threat. Renewed world war will be more easily averted if we, the electorate, recognize that peace has broken out.

The corollary to Stalin’s dictum is that billions of people at relative peace is ... statistics. The only way to take in the dawning of World Peace is by anecdote and by narrative. And by celebration.

Time to stage a Big Victory Day parade (and, maybe, post some Instagrams — Life Magazine having folded — posting some Kodak® Moments of a uniformed sailor stealing kisses from someone in a white starched nurse's uniform). If enough of us grasp that continuing Big War is a Big Lie -- and begin to credit the dawning of Big, if imperfect, Peace -- Big Government, lacking the predicate of Big War, will begin to collapse. Perhaps Big Government will collapse as quickly as did the Empires, only far more peacefully.

The gold standard, that great agent and guarantor of equitable prosperity, was, as ever, an early casualty of war. For a century it, and far too often equitable prosperity, faced an intermittent headwind of hurricane force. Now, with the tailwind of Peace — itself a headwind for proponents of Big Government — the gold standard becomes recoverable. Led by Ron Paul, Lewis E. Lehrman (for whose Institute's thegoldstandardnow.org this writer serves as editor), Steve Forbes and others, let us now recover it.

A century of war ends. A golden age beckons.

Do your part, gentle Reader. Celebrate the end of a century of all-out war. And with that celebration now let the era of Big Government, having served its purpose, to combat tyranny, draw to a close.