Rachel Marsden
|
Posted: May 25, 2022 12:01 AM
Share   Tweet
The opinions expressed by columnists are their own and do not necessarily represent the views of Townhall.com. 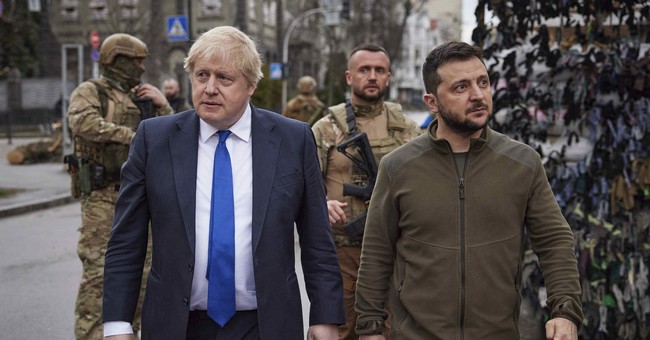 PARIS -- It was inevitable that sooner or later, leading European countries would start distancing themselves from the aggressive rhetoric that has been the hallmark of the European Union leadership's approach to the armed conflict in Ukraine.

Last week in Turin, Italian Prime Minister Luigi Di Maio presented a four-point peace plan to United Nations Secretary General Antonio Guterres, who made contact with Moscow and Kyiv in visits a few weeks ago. Di Maio also chaired the group of Europe's foreign ministers at a meeting in Turin, including those of other EU countries which have recently shown interest in de-escalating the months-old debacle.

Recently, French President Emmanuel Macron has been criticized by Baltic state leaders for even picking up the phone to engage with Russian President Vladimir Putin, while German Chancellor Olaf Scholz was pressured to contribute to the irresponsible flood of weapons into Ukraine and slammed for not being sufficiently enthusiastic about doing so.

So now Di Maio has laid out a concrete exit strategy that may already enjoy quiet backing from some EU member states. First, there would be a ceasefire and demilitarization of the battle zones. Then enshrinement of neutrality for Ukraine with security guarantees. Thirdly, a bilateral agreement between Russia and Ukraine regarding the status of contested territories. And finally, an end to anti-Russian sanctions and a multilateral peace agreement between the EU and Russia that would no doubt have to take into account arms control in the wake of flooding the zone with weapons, which may have already reportedly made their way onto the black market.

It's hardly surprising that some individual member states within the EU are seeking an off-ramp, even as the bloc's unelected supranational leadership in Brussels ramps up the irresponsible rhetoric.

The most aggressive behavior in the western world has been exhibited by those with the least to lose from prolonging the conflict -- politically, economically, or otherwise.

Washington's recently approved $40 billion package for Ukraine that includes military, economic, and humanitarian support that will end up who knows where amid corruption and chaos suggests a long-term investment in promoting instability. But the various rounds of U.S. sanctions against Russia is telling as to how confident Washington feels that its economy is mostly sheltered from any related fallout. Clearly, the roughly 8 percent of overall U.S. supply of petroleum and oil products previously imported from Russia can be replaced by other sources from Mexico, Canada, South America, or West Africa, even though in some cases the increased shipping distance could bump up the cost, as the Wall Street Journal explained last month.

So when President Joe Biden sanctions Russian industry -- energy or otherwise -- there's perhaps even a net future benefit for the U.S. through the urgency to establish greater North American energy independence (anti-pipeline anti-environmentalists be damned).

It's slightly more puzzling why the UK is taking a hari-kari approach to the conflict by arguably going even further than the U.S. In prohibiting even British citizens and companies from offering business consulting services - including accounting and public relations - to Russian business entities, the UK isn't really harming the Russian economy so much as its own by causing Russia to pivot to service providers from Europe, America or elsewhere.

Anti-Russian fervor in the UK is so misguided that even the Association of Tennis Professionals (ATP) and the Women's Tennis Association (WTA) decided on May 20 to strip the annual Wimbledon tennis tournament of its ranking points for participants -- effectively reducing the competition to an exhibition match -- as a result of the tournament's decision to ban Russian and Belarusian players. You'd think that they were directly lobbing missiles into Ukraine with backhand serves.

Britain's scorched earth approach to Russia suggests that it is either ideologically drunk to the point of economic recklessness, or else it figures that it can weather the storm. Britain's National Institute of Economic and Social Research suggests that "the impact on the UK could be to reduce GDP growth by around 0.8 per cent to 4.0 per cent in 2022 and to 0.5 per cent in 2023." Meanwhile, British gas comes from the North Sea and Norway, with just 3 percent imported from Russia (compared to 35 percent for the EU).

But it's the EU that risks being hit hardest and is staring down the barrel of potential recession. Which would explain why despite EU Commission President Ursula von der Leyen's vow to eventually ditch Russian energy, 20 EU companies supplying member states have opened accounts in rubles in order to continue buying gas from Russia's Gazprom in light of the EU's own anti-Russian sanctions.

Some EU member states know that their citizens are fed up with the chaos and are now taking the first tentative concrete steps toward peace. What remains to be seen is how much courage they have against ideological pressure from the U.S., UK, and EU leadership.