Rachel Marsden
|
Posted: Jan 24, 2018 12:01 AM
Share   Tweet
The opinions expressed by columnists are their own and do not necessarily represent the views of Townhall.com. 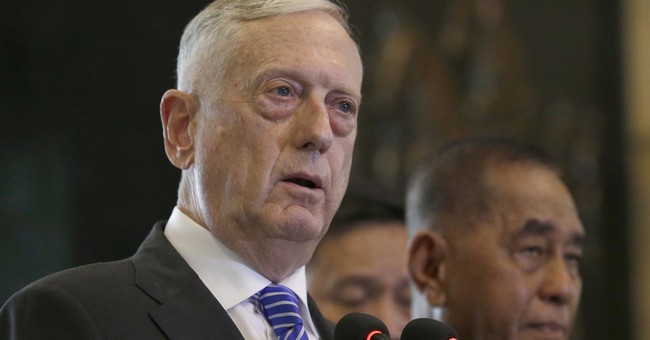 "We will continue to prosecute the campaign against terrorists that we're engaged in today," Mattis said, "but great power competition, not terrorism, is now the primary focus of U.S. national security."

Using the term "competition" instead of "war" implies an economic component, since there are currently no direct military competitions between the U.S. and either Russia or China. Governments almost never frame military conflict in economic terms, presumably since the idea of spilling blood for any reason other than an imminent threat to people's lives is a hard sell to the public.

Yet it's clear that economic competition is an underlying cause of every conflict in the world today, including the battle against the Islamic State. As former French intelligence chief Alain Juillet has noted, the terrorist troubles in Syria just happened to arise three weeks after Syrian President Bashar al-Assad's 2011 selection of an Iranian-Iraqi pipeline through Syria rather than a Saudi-Qatari pipeline. The competing pipeline plans would provide a way for either Iran or Qatar to ship natural gas to Europe from the vast Iranian-Qatari South Pars/North Dome gas field, thus eliminating the high cost of transporting the gas by tankers.

Given the public aversion to military conflict based on economics, it's understandable that Mattis didn't go a step further by saying "great power economic competition" is now the primary focus of national security policy. He could have, although stating the obvious would have made the justification of any military-spending increase virtually impossible. If you're in the business of weapons-building and soldier-deploying, what are you going to do when global competition is no longer won by military intervention and might, but rather by deal-making?

Since Mattis certainly wasn't going to accompany his statement with a downsizing announcement, or a restructuring of the military to shift resources to economic intelligence, one had to wonder how long it would take for the other shoe to drop. In other words, how would Mattis combine an admission that global conflicts are economic in nature with a continuing need for U.S. military might?

It didn't take long. In the same speech, Mattis singled out Russia and China as "revisionist powers" seeking to "create a world consistent with their authoritarian models, pursuing veto authority over other nations' economic, diplomatic and security decisions."

Those are some impressive rhetorical gymnastics. Mattis managed to shove economic competition into the military/defense box by suggesting that Russia and China are trying to take over the world by making other countries more like them. Basically, Mattis blended the new "economic competition" model with the old "Red Scare" communist threat.

Nice try. No one with a foothold in reality believes that Russia and China are attempting to impose any kind of ideology on other countries. Does anyone in the U.S. really think that Russia and China are breathing down their necks on a daily basis? The secretary of defense has just said that this should be your primary security concern as an American. Seriously. Does this actually match your day-to-day reality?

If anything, China and Russia are playing a capitalist "away game" on the world stage that puts some of the original proponents of capitalism to shame. That's on us. Trash-talking the opponent isn't the best recipe for victory.

Mattis laments Russia and China's "veto authority" over other nations. It's hard to imagine which veto powers Mattis is referring to. With the exception of Security Council resolutions, U.N. resolutions are non-binding. Mattis seems to be pretending that the United Nations has dictated to America what it can and cannot do, which has never been the case.

Where Mattis has a valid point is in pinpointing detrimental aspects of the current globalist system. Institutions of global governance were initially created by Western nations in an attempt to avoid war and to draw countries such as China and Russia into the global fold. But China and Russia have adopted a measured multilateral approach without sacrificing their own self-interest or national borders -- unlike in Europe, where countries are struggling with the effects of ceding national sovereignty to supranational European Union governance.

The Donald Trump administration has more in common with China and Russia than Mattis cared to publicly admit. All are looking out for their own interests in an era where the failures of globalization have become all too evident. All are playing the exact same game. So let's not pretend that there are "good" and "bad" players here -- it's just "our side" and "their side." And "our side" really needs to get real and stop blaming others.