Is Tillerson's Downsizing of the State Department Really Such a Bad Thing?

Rachel Marsden
|
Posted: Nov 30, 2017 12:01 AM
Share   Tweet
The opinions expressed by columnists are their own and do not necessarily represent the views of Townhall.com. 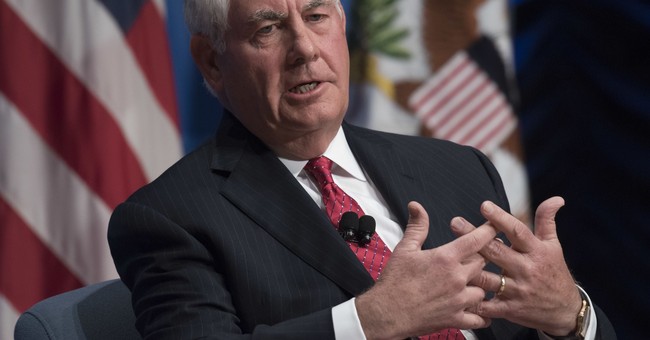 PARIS -- Secretary of State Rex Tillerson has been working the plunger on the overseas branch of the Washington swamp's public relations department, also known as the U.S. State Department. Some of the swamp critters are now to the point of flushing themselves down the drain, either out of honor or frustration or both.

Tillerson has shaken up his department this year, according to the New York Times, dismissing numerous staffers and forcing many others into early retirement. Meanwhile, diplomats are "sounding the alarm," the Times reports, evoking the specter of Benghazi and framing their own plank-walking as a potential threat to national security.

Oh dear. Let's walk back the hysteria, shall we?

Living abroad, I run into current and former State Department officials on a fairly regular basis. Some take a fairly pragmatic "realpolitik" view of world affairs when speaking off the record, but it's a different story when they step onto a stage or stroll into a cocktail party and many of them suddenly turn into talking-point-spewing automatons.

Recently, during one such interaction, an official seemed genuinely interested in my analysis of Russian President Vladimir Putin's remarks during a lengthy press conference that I had attended. However, on the public stage, it was like a switch had flipped and the official had morphed into a Magic 8 Ball, spouting prefabbed demagogic talking points straight out of the Cold War playbook.

While the talking points may be aligned with the views of the Washington establishment and a certain segment of the mainstream media, they aren't aligned with the agenda of President Donald Trump or the will of the voting base that elected him.

If your job as an official in the government's foreign PR department is to carry out the vision of a commander in chief elected democratically by the people you're serving, and you feel that it's in conflict with how you personally view your role, then, by all means, give yourself a good flush, because you're at the very epicenter of the obstructionist deep state.

In questioning the frequency and duration of security briefings allowed by Tillerson, the Times article brought up the deadly 2012 terrorist attacks in Benghazi that took place during former Secretary of State Hillary Clinton's watch. It's possible the Benghazi annex was targeted because CIA operatives there may have been shipping weapons to Syria.

"I do believe that the CIA annex in Benghazi was procuring weapons, some of them to get them away from the jihadists in Libya. But some of it to ferry those weapons through Turkey, into Syria," Republican Sen. Rand Paul, a member of the Senate Committee on Foreign Relations, said in a Fox News appearance last year.

Maybe Tillerson is simply trying to curtail the underhanded activities of State Department and CIA operatives who use the department as official diplomatic cover overseas.

The Democratic Party seems particularly disturbed by Tillerson's shakeup of the State Department -- which is hardly surprising given that department members are predominantly Democrats. Earlier this month, the Democrats on the House Foreign Relations Committee wrote Tillerson a letter noting a 60 percent reduction in the number of career ambassadors and a 42 percent decrease in career ministers.

While career diplomats can indeed leverage an invaluable wealth of experience to tackle complex challenges, it's only of value if they aren't running around undermining the agenda of the president, fancying themselves some kind of underground resistance as they carry out official duties.

How many of the career diplomats who were dismissed were fully committed to carrying out Trump's vision, regardless of their own? If Tillerson observed that sort of disconnect, nothing prevents him from filling the ranks of ambassadors with outside appointees. There's no shortage of businesspeople with international experience (in the mold of Tillerson himself) who haven't spent a lifetime doing the backstroke in the swamp. Such people may have a less ideological and more pragmatic view of current challenges.

"With the range of crises, war and humanitarian disaster around the world, slashing our diplomatic corps is downright dangerous," House Democrats wrote in their letter to Tillerson.

Here we go again with the fear-mongering. Are we really supposed to believe all that's standing between order and chaos everywhere in the world are a bunch of Washington civil servants?

In fact, it would seem that the world has calmed down significantly since Tillerson began downsizing the State Department. The Islamic State is nearly wiped out. Conflict in the Middle East is being addressed by countries that are located in or near the region. Problems related to North Korean belligerence have been punted to China.

If the current pace keeps up, the State Department may be reduced to meeting in a phone booth, but the world might just be better off.