Rachel Marsden
|
Posted: Jul 13, 2016 12:01 AM
Share   Tweet
The opinions expressed by columnists are their own and do not necessarily represent the views of Townhall.com. 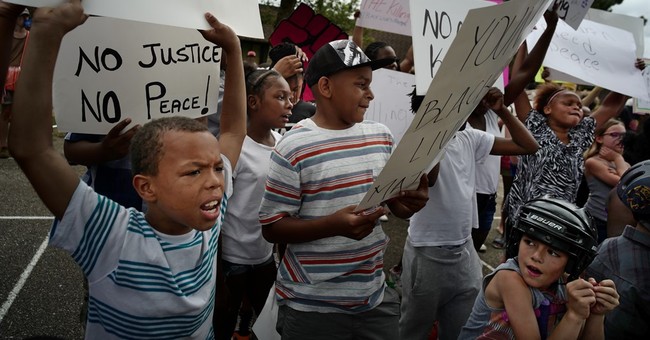 Why have race relations in the United States so drastically disintegrated under a president who had set out to improve them? The answer lies in the leftist ideology of the president in question.

Activist groups staged nationwide protests last week after two black men -- one in Louisiana and one in Minnesota, each reportedly carrying a gun -- were fatally shot by police. At a protest in Dallas, five law enforcement officers were killed by a man who, according to police, had "stated he wanted to kill white people, especially white officers."

On July 7, hours before the chaos in Dallas, the FBI's New Orleans division had issued a report alerting law enforcement in Louisiana to several social media posts calling for riots and for the killing of police.

After the police shootings in Louisiana and Minnesota, President Obama had tried to rationalize the anger of minority activist groups.

"When incidents like this occur," Obama said, "there's a big chunk of our fellow citizenry that feels as if because of the color of their skin, they are not being treated the same."

But after the attack on law enforcement in Dallas, Obama tried to quell the flames he had stoked earlier.

"Let's be clear, the president said. "There is no possible justification for these kinds of attacks or any violence against law enforcement."

He's right: There is no excuse for using race -- or anything else -- as a pretext for domestic terrorism and anarchy. But Obama's earlier statements only exacerbated the anger of minorities by promoting a sense of victimization and racial tension.

There is no exit strategy for dealing with racial conflict. It's the kind of conflict that leftists like because it keeps people dependent on leftist politicians, who ultimately never resolve anything. If leftist politicians were capable of solving such problems, perhaps we would have seen a decrease in racial strife during the eight years of the Obama presidency. Unfortunately, that hasn't been the case.

The focus on racism only serves to permanently imprison people in a victim's mindset, making them feel that they're unable to change their own lives for the better. It leaves people very easily manipulated by politicians who tell them what they want to hear.

Racism and the perception of social disparity is being used in America -- as well as in other Western democracies, such as France -- as a pretext to undermine the rule of law in the same way that socialist guerrilla terrorist groups used civil rights issues as an excuse to wreak havoc in Europe and America in the 1960s and 1970s. Those groups emerged in the wake of Axis authoritarianism and were given far too much leeway by the establishment. Western leaders saw it as a rebellion against mom and dad's generation, which young socialists held responsible for the rise of authoritarian figures as Hitler, Mussolini and Franco.

Today, activist groups aren't rejecting authoritarianism, but rather the basic rule of law that serves as the cornerstone of civilized nations.

The protest cycle of the '60s and '70s ended with the election of a president who inspired people to help themselves: Ronald Reagan. This latest American protest cycle will only end with the same type of leader coming to power.

America is a country of laws that are passed by elected representatives and enforced by appointed officers. This system may not always function perfectly, but it's what sets America apart from many deeply flawed nations worldwide. When the law is no longer upheld, or when its enforcers are killed in cold blood because of their role, it's the beginning of the end of functional democracy.

The generation that came of age during the '60s and '70s is now in power. Obama was steeped in strategic victimology as a community organizer in Chicago. Hillary Clinton is a product of the civil rights generation, which saw the emergence of terrorist groups like Weather Underground and the Black Panthers. The day after the shootings in Dallas, Clinton praised the fallen officers and offered condolences to their families, then quickly brought the subject back to "systemic racism" in police departments.

The solution? It's to elect her, of course. Because she'll fix everything for those who find themselves the target of racism -- just as Obama promised to do.