Time to Shove the 'Free Love' Generation Out the Door

Rachel Marsden
|
Posted: May 25, 2016 12:01 AM
Share   Tweet
The opinions expressed by columnists are their own and do not necessarily represent the views of Townhall.com. 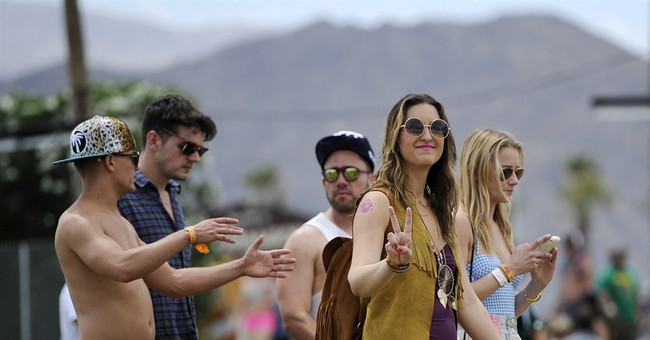 The leftists who came of age in the counterculture revolutionary movements of the '60s and '70s are now in charge in both Europe and the U.S., and facing a populist backlash. They failed to learn the lessons of their own experiences, and it's time for them to be dropkicked into the waste bin of history.

In the wake of World War II and the defeat of Nazi Germany, there was a massive movement in Western nations against anything that smacked of authority. At first it was more social than political.

In the U.S, the hippie movement promoted the idea of "free love" in the shadow of the Vietnam War and the civil rights movement. On the other side of the Atlantic, in May 1968, French communists and socialists staged protests that brought the country to a standstill under the guise of denouncing the traditional social values exemplified by President Charles de Gaulle, who had led France through WWII.

Ah, kids will be kids, right?

The killing of communist revolutionary Che Guevara by troops in Bolivia added political jet fuel to vague social unrest. Intent on fomenting revolution across Latin America, Che was faithful to a brand of radicalism that espoused the sort of guerrilla warfare promoted by China's Mao Zedong. This alarmed even Marxists like Cuba's Fidel Castro and the Soviet Union's Nikita Khrushchev, who considered themselves reasonable by comparison.

Why is all of this important now? Because the same pattern is about to repeat itself.

Today's establishment elite in Western democracies consists of members of the May 1968 generation. Democratic presidential candidate Hillary Clinton cut her teeth on civil rights activism, as did President Barack Obama as a community organizer. French President Francois Hollande has said of that generation: "Their utopia was that of a fraternal society that would respect humans and nature, and refuses to make material prosperity the measure of all things."

The May 1968 generation created a climate of insecurity by replacing actual authority with feel-good emotional fluff. They were so determined to erase any trace of authority that they allowed left-wing terrorist groups to proliferate. In the U.S., there was no authority figure to control the classroom until President Ronald Regan was elected in 1980 and took over from Jimmy Carter. In France, there was a crackdown on terrorism following the 1981 election of Socialist President Francois Mitterrand, but not before the country was jolted by 114 terrorist attacks over a two-month span in 1982.

The "free love" generation still believes in pursuing its failed utopia of weird values and leftist social engineering, conveniently forgetting the terrorist horrors they unleashed through their own unrest. They're still convinced that social integration just magically happens despite their insistence on radical diversity. Barely a week goes by now in France when there isn't a major protest involving police cars being burned and violence against authorities. Union-organized protests are preventing refueling at gas stations in Paris and other parts of France, causing them to run empty.

That's the social movement part of the equation. Now, here comes the terrorism -- except this time it's not domestic radicals who are serving as the military handmaidens of the leftists, but rather jihadists.

Lax immigration policies perpetrated by leftist politicians have led to an influx of migrants from terror-ridden countries, even while authorities struggle to keep up with homegrown terrorists, who have perpetrated recent major attacks.

Airline terrorism was a hallmark of domestic terrorist groups of an earlier era. In the modern era, jihadists used commercial airliners to perpetrate the 9/11 attacks and have brought down other commercial planes. About 70 baggage handlers at Charles de Gaulle and Orly airports in Paris had their clearances revoked last December because they were believed to have been radicalized. Last week, an EgyptAir plane ditched into the ocean en route from Paris to Cairo. The cause of the crash is still unknown.

The May 1968 generation is on the verge of being shoved through history's exit door, and not a moment too soon. It's no wonder we're seeing the rise of authoritarian leaders, particularly anti-establishment ones such as Donald Trump who represent a clear divorce from that generation's views, values and policies. The only question is whether the power-wielding members of the "free love" generation have rigged the system in ways that will further delay their peaceful, democratic removal.

If You're Confronted By A Mask Karen, Rand Paul Has Some Advice
Townhall
This again: Target toothbrush guy David Leavitt wants to know why it's easier to buy a gun than to vote
Twitchy
Does Justice Sotomayor's Intemperate Rant at Her Colleagues Indicate That She Knows Roe v. Wade Is About to Be Overturned?
Redstate
Woman Who Stopped at Lab Monkey Crash Site Is Now 'Sick'
PJ Media