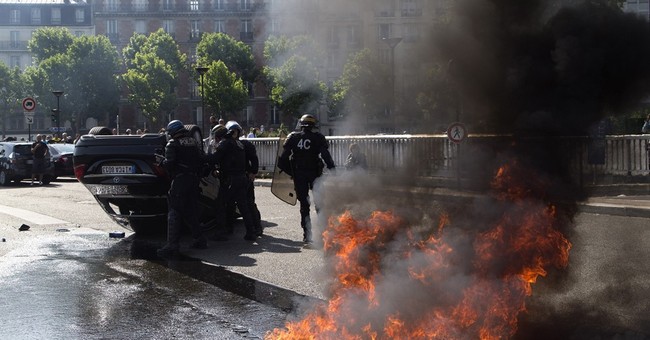 PARIS -- French police arrested the chief executive of Uber France and the general manager of Uber Europe this week for "inciting illegal employment." Translation: Uber is disrupting a system in which a cartel deprives the free market of alternatives while imposing widespread consumer misery. But, hey, at least the distribution of such misery is democratic, right?

Based in San Francisco, Uber produces a smartphone application that lets users geolocate the nearest ride in the Uber network. The French government would apparently rather force Parisians to walk home for over an hour in the middle of the night (something I once had to do) because there isn't a single unoccupied taxi to be found along the route, rather than allow them to find a ride using a smartphone app. (Actually, there was one available taxi that night -- the driver just didn't feel like working and shamelessly told me so.)

The French Parliament passed a law last year -- a law proposed by a member of the Socialist Party, not surprisingly --specifically targeting Uber. The law prohibits apps that track vehicles not officially licensed as taxis by the French government.

French taxi licenses are extremely limited, and those who apply end up on a years-long waiting list. Licenses are distributed by the government for free, but they are trafficked for more than 200,000 euros each. Regulation effectively guarantees profitability for anyone with a license, since everyone in the taxi cartel follows the same hymn book on the gouging of customers.

For example, when you call for a ride, the taxi company will begin charging you from the moment the taxi is dispatched, regardless of how far away it is. I first became aware of this practice when a charge of 15 euros appeared on the meter as I entered a cab upon its arrival. At the destination, the driver then tried to extort more money out of me before he would issue me a receipt. Since I don't negotiate with fiscal terrorists, I offered to stay prisoner in the backseat. This incident taught me two things: (1) Your true mother tongue is the one in which you feel most comfortable swearing; and (2) never take any Parisian taxis.

Uber's service mitigates such problems by locating the nearest driver, calculating the cost and distance of the trip before you even get into the car, and allowing the customer to pay via smartphone.

Instead of cracking down on Uber, the French government should be happy that the company is exposing inefficiencies in the market. But you quickly realize when living in France that while some government oversight legitimately protects consumers -- the food and drug sectors come to mind in this regard -- far too much government regulation is simply designed to maintain the status quo and to ensure that misery is spread around as equally as possible.

One of the benefits of being licensed by the government, at least in theory, is that customers will pay for the increased confidence in your service. The same rationale exists when politicians argue for regulation of marijuana or brothels, claiming that the alternatives to government-licensed fare are more risky for the customer. But in the case of taxis, Parisians have already had such horrible experiences with licensed cab drivers that it would be hard to do worse.

A French friend who complains nonstop about Parisian taxis recently told me he doesn't mind that when you order an UberPop car, the driver is just some average guy who picks you up with his own car and licenses his services to Uber to make a few extra bucks. Now an avid Uber customer, my friend recently told me about an UberPop experience in which the driver showed up "with a beard longer than bin Laden's," and had an interesting discussion with my friend about the Islamic State during the ride.

Uber may not be a service that suits everyone -- as a woman riding solo, I'm not willing to chance it -- but it has nonetheless exposed impediments to a free market in the French taxi industry. The ideal solution is somewhere between Uber and the status quo. But arresting Uber executives smacks of the kind of insecurity and desire for control that lurks deep within the socialist psyche. What's next -- waterboarding them?