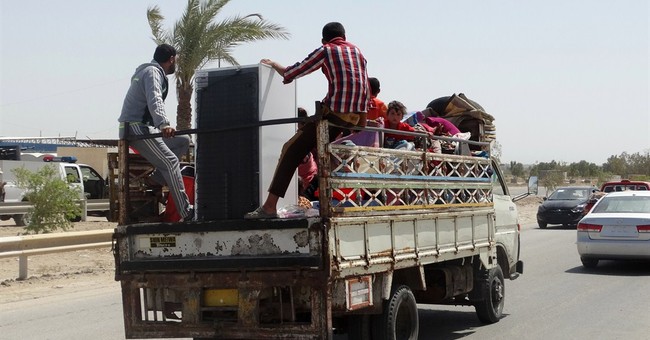 PARIS -- Pentagon officials are touting the success of a Delta Force special operations commando raid in Syria last weekend that resulted in the dispatch of about a dozen Islamic State riffraff. Not to take anything away from Delta Force, which is comprised of America's most elite warriors, but this kind of straightforward, direct-action job sounds like a waste of their immense talents and skills, and nothing that a few Rangers or Marines couldn't handle. It smacks of little more than a publicity stunt.

And if, as speculated, the target was a big fish who wasn't there when the raid took place, then that's an intelligence failure. The Pentagon probably wouldn't be anxious to cop to another intelligence failure after the recent revelation that a January drone strike in Pakistan inadvertently killed two Western hostages -- an American and an Italian.

While the Pentagon was patting itself on the back after the raid in Syria, the Islamic State was busy sending out -- via social media, forums and even their own online TV outlet -- images of themselves indulging in another rash of beheadings and a victory parade for overtaking Ramadi, a major city less than 80 miles from the Iraqi capital of Baghdad. The U.S. government is basically trying to win a war against the terrorist PR equivalent of the Kardashians and wasting its time trying to convey a sense of victory through communications efforts. Why bother? Just get the job done quietly and let the results speak for themselves.

We haven't seen the Pentagon trot out Delta Force to the press for a while. The fact that it's done at all is troubling. Promoting the activities of units involved in clandestine operations effectively takes the "quiet" out of "quiet professionals." One can, however, understand the Pentagon's temptation to leverage everything at this point: The announcement of the raid leaves the impression that there's some serious terrorist swamp-draining going on, and that taxpayers are getting their money's worth from the defense budget.

Delta Force is the most formidable tool in the United States military arsenal. It would be nice if it had better support from the rest of the military-intelligence apparatus so that its optimal role in executing complex operations against high-value targets while minimizing collateral damage could be maximized rather than exploited for media attention in the case of an easy gig. Instead, the recent preference in complex operations has usually been to just fire a missile from a drone and let a higher power sort out the actual jihadists from the sort of collateral damage that Delta could prevent.

Putting aside for a moment the use of Delta in this most recent cakewalk, it's worth asking why the Pentagon would even bother making an announcement about the raid. For one thing, it's counterproductive. Chest-beating feels good in the moment, but so does eating a whole tub of ice cream. Promoting terrorist kills effectively riles up the terrorist hornet nest, which is precisely why the Russians and the French don't do it. Instead, they quietly liquidate jihadists without fanfare.

Take the case of Chechen jihadist leader Doku Umarov, who had claimed responsibility for pre-Olympic bombings in the run-up to last year's Sochi Games. According to a Russian source, he was captured in a special operations raid and then transported to Lubyanka prison in Moscow, where he was quietly eliminated after being wrung out for intelligence purposes. Only several months later did Putin ally and Chechnya leader Ramzan Kadyrov release a photo of a dead Umarov via his personal Instagram account.

If Putin can be disciplined enough to keep his shirt on (for once) following the execution of a terrorist leader, why can't the Pentagon even do it with terrorists of debatable value?

We'll know if there's headway being made against the Islamic State when its snuff-film production mill becomes less prolific and, as a result, we hear less about the terrorist organization. It's not as if like journalists are going to embed themselves with the Islamic State and report live from the scene of mass slaughter and vandalism of ancient cities. Fewer Islamic State terrorists means fewer selfies with their horrors as a backdrop.

Islamic State psychos don't even deserve to be eliminated by Delta Force -- that's far too great of an honor for members of a group that refuses to abide by traditional conflict decorum.

Former CIA Director of Operations Jack Devine recently told me that years after he'd led the CIA's covert war against the Russians in Afghanistan in the 1980s and had shifted to the counter-narcotics division, the head of the CIA's Russia division invited him to Moscow to talk to KGB officials about drugs in the interests of "warming up relations." They took a helicopter ride with a KGB counterpart to the Friendship Bridge, which the Russians had crossed on their way out of Afghanistan, to have a look at the poppy fields and get their picture taken together.

"There were rules of civility," Devine told me. "You don't behead people. You could never fly in a helicopter with a terrorist."

The Islamic State needs to be eliminated with as little fanfare as possible, and treated like the pothole in history that it is.