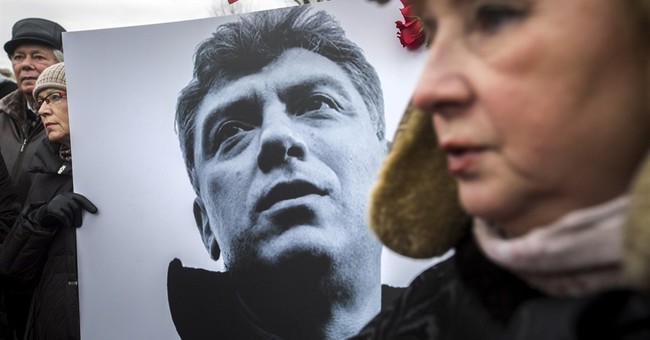 PARIS -- Ever since Russian opposition figure Boris Nemtsov was gunned down while walking with a girlfriend near Moscow's Red Square last week, there has been rampant international speculation about who's responsible for the murder.

Why is everyone in such a hurry to log onto social media, voice an opinion on Nemtsov's killing, huddle with the like-minded and gang up on those with opposing views? Why do so many Westerners care, let alone so passionately?

Partly, it's a real-life mystery and no one yet knows the ending. It's also a Rorschach test for people's worldview: In the absence of evidence, there's a tendency to fill in the blanks with preconceived ideas and wishful thinking. Nature hates a vacuum.

Nemtsov was a deputy prime minister under former President Boris Yeltsin in the 1990s, when Russia's assets were divvied up and gifted to oligarchs. When Yeltsin resigned in 1999, he chose Vladimir Putin as his successor over Nemtsov.

In 2013, Nemtsov issued a report claiming that officials and businessmen embezzled billions of dollars from the Sochi Olympics. Before his death, he was working on a report that was supposedly going to detail Russia's role in the Ukrainian crisis.

Nemtsov, 55, was gunned down while walking with a female companion, a 23-year-old model, near the Kremlin. Despite a slew of security cameras mounted in the high-security area where Nemtsov was killed, apparently none of them captured the killing. And so this mysterious slaying has turned into a parlor game.

Depending on the viewpoint of a given theory's proponent, Vladimir Putin and Russian intelligence and security services may either be very fond of or totally against having people gunned down. According to other theories on the murder, Western intelligence agencies may or may not be trying to plant a false flag in an attempt to spark a revolution.

An intelligence agency could orchestrate an assassination in a way that makes it appear to have been executed by a hostile intelligence agency. So we can probably dismiss the idea that a murder might have the hallmarks of a certain agency's modus operandi.

Depending on whom you ask, Nemtsov was either: a washed-up has-been, a powerful opposition figure, a threat to Putin, or someone with no popular support. The only thing that we know for certain about Nemtsov's murder so far is the Russian political climate in which this crime occurred.

The Levada Center, a Russian polling and analytical organization widely considered to be independent, conducted a survey at the end of February in which Putin received an 86 percent approval rating. Respondents were also widely supportive of the Secret Service, with 56 percent saying the Secret Service has an important role and that its powers fulfill that role. Only 27 percent believe the Secret Service has "too much uncontrolled power." By contrast, only half of the respondents approved of the actions of the Duma (Russian parliament).

Respondents were asked to "name 5-6 politicians or public figures whom you trust the most," and those listed most frequently after Putin (listed by 59 percent of those polled), were Defense Minister Sergei Shoigu (24 percent), Foreign Minister Sergei Lavrov (20 percent) and Prime Minister Dmitry Medvedev (19 percent). And guess who's next on the list? Nope, not a liberal democrat. A good old-fashioned Communist, Gennady Zyuganov, the first secretary of the Russian Communist Party.

The next in line to power behind Putin and United Russia aren't lovers of freedom and democracy -- they're old-guard communists. We in the West erroneously like to think that if given the chance, everyone would vote like us.

Hopefully, whoever is responsible for Nemtsov's murder will be brought to justice. In the meantime, both Russia and Western nations have a lot to lose by trying to leverage this incident in the absence of discernible facts. The last thing Russia needs is further destabilization, given the conflicts in its own backyard.