What Obama Can Learn From Hagel -- And From 'Mockingjay' 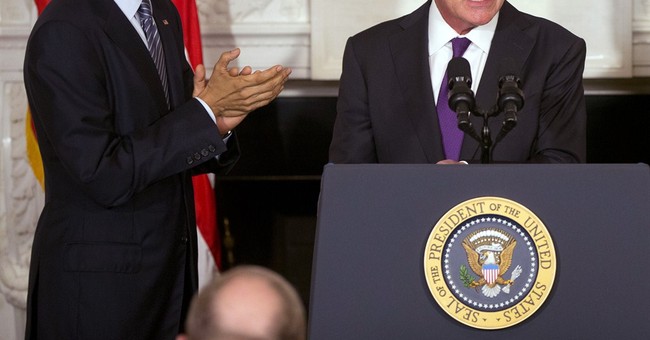 Trending
Less than 10 days before Secretary of Defense Chuck Hagel announced his resignation, he addressed a memo to senior defense leaders.

"While we have been engaged in two large land mass wars over the last 13 years, potential adversaries have been modernizing their militaries, developing and proliferating disruptive capabilities across the spectrum of conflict. This represents a clear and growing challenge to our military power," Hagel wrote. "I see no evidence that this trend will change. At the same time, downward fiscal pressure will constrain the way we have traditionally addressed threats to our military superiority and demand a more innovative and agile defense enterprise."

Although Hagel stepped down earlier this week, he must be relieved to know that his poignant message reverberates in a new blockbuster film based on some young-adult fiction.

Joan of Arc rescues Edward Snowden -- that's how one might encapsulate "The Hunger Games: Mockingjay, Part 1," the latest big-screen installation of the "Hunger Games" book trilogy. It should probably come as no surprise that the series' author, Suzanne Collins, is the daughter of a U.S. Air Force officer who served in the Vietnam War.

The film's protagonist, Katniss Everdeen (played brilliantly by Academy Award-winning actress Jennifer Lawrence), is shamelessly fashioned after Joan of Arc, the French peasant girl who had divine visions that resulted in her leading her countrymen to victory in several battles against the English during the Hundred Years' War, until she was captured and executed.
CARTOONS | Tom Stiglich
View Cartoon

Katniss is the rebels' "Mockingjay" mascot, and much of the film involves dressing her up as Joan of Arc to film propaganda videos showing her dominating the fascist government forces of The Capitol (led by Donald Sutherland's President Snow) through asymmetric warfare. In one scene, Katniss and her hunky soldier pal Gale shoot two bombers out of the sky using nothing more than a firearm and an explosive arrow shot from Katniss' bow.

On the other side of this fictitious conflict, we have Katniss' friend, Peeta, who has been captured by The Capitol and is being used as a tool for propaganda purposes. Appearing regularly in contrived TV interviews, he denounces warfare as a means of securing peace -- even as his captors persist in their overt warfare against any entity that questions their authority. Peeta serves his captors in their effort to brainwash any opposition to the dictatorial regime now housing him.

The striking similarities between Peeta and Edward Snowden, the former NSA contractor currently denouncing American intelligence and national security initiatives from his refuge in Moscow, don't end with the fact that Snowden and the actor who plays Peeta, Josh Hutcherson, look enough alike that they could pass for brothers.

It would be silly to ask what the filmmakers might be attempting to imply by juxtaposing such blatant Snowden and Joan of Arc symbols. Although it might prove interesting to read into the plot thread what each of these figures -- completely unrelated to each other in time and space -- represents, and to draw conclusions, it would nonetheless be nothing more than intellectual gymnastics.

Examining each character as a separate entity is more practical. Let's start with Katniss. This young lady seems to innately understand what Hagel explained in his memo about the importance of innovation and agility on today's battlefields. She's the epitome of agility in battle to the absurd extreme. She takes out bombers with a bow and arrow. She's the face of a rebel movement that understands that even though you might have a bunker full of ammo to use against the enemy, sometimes it's better strategy to eschew the heavy weaponry and instead use highly surgical operations based on actionable intelligence.

Reviewers who have been claiming that "Mockingjay" doesn't have much action are missing the point, much like U.S. President Barack Obama's strategy against the Islamic State misses the point. There's no sense tossing bombs from planes in a big show of military might, and standing up a massive army, in instances where intelligence work coupled with precision strikes is the more sensible approach.

Snowden-like Peeta, meanwhile, represents a formidable and increasingly critical component in modern warfare: the battle for hearts and minds through propaganda. Both state and non-state actors have taken to leveraging social and traditional media to achieve goals ranging from recruitment to messaging. The agitprop aspect of warfare has grown to be much more sophisticated and insidious than the simple issuing of talking points.

In "Mockingjay," Peeta is the subject of staged interviews intended to look natural and not like prepared speeches. Katniss' rebels quickly realized that their own propaganda would have to consist of filming her authentically in the battlefield rather than having her perform to script.

Obama and his next secretary of defense would benefit from spending some quality time at a matinee with a bucket of popcorn.